The Aquino administration is open to forging an alliance with the communists, the government’s chief negotiator, Alexander Padilla, said Tuesday.He said the government was open to accepting suggestions from “a recommendatory body” created by the Communist Party of the Philippines and the National Democratic Front.Communist Party founding chairman Jose Maria Sison on Monday renewed his offer of an alliance and a truce with the government through a “special track” in the negotiations, but dropped a proposal for a coalition.Sison made the offer in an online lecture before the National Defense College of the Philippines in Camp Aguinaldo on Monday, a copy of which was e-mailed to the Manila Standard.

“It is possible that a recommendatory body by them may be formed. If they are pushing for this special track, we are open to this. We find this more welcome than their earlier proposal for a coalition,” Padilla said.

“But let me make it clear we are only talking of an alliance here. We are not talking of coalition or power sharing or giving Cabinet posts to the CPP-NDFP.

Sison expressed optimism that the peace talks, which have been stalled for 14 months, could still be revived through the special track.

“I urge no less than the President of the government of the Philippines to muster the political will to do his crucial part in making the regular and special tracks succeed,” he said. END_OF_DOCUMENT_TOKEN_TO_BE_REPLACED 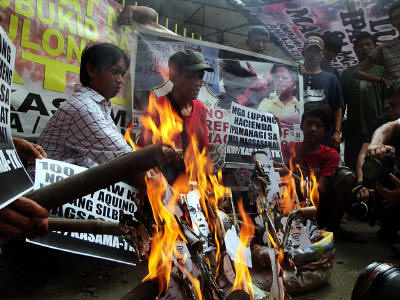 Gonzalez, survivor of the ambush staged by elements of death squad allegedly from the Southern Luzon Command (Solcom) of the Armed Forces of the Philippines (AFP) during the May 2004 elections, along with farmer and fisherfolk leaders aging from 50 to 60 years old and all members of the Katipunan ng mga Samahang Magbubukid sa Timog Katagalugan (Kasama-TK) and Pambansang Lakas ng Kilusang Mamamalakaya ng Pilipinas-Timog Katagalugan (Pamalakaya-TK) trooped to the heavily guarded gate of Malacanang to warn Aquino of “intensified peasant war” over the President’s failure to address the land problem in Southern Tagalog.

“If Aquino wants war, we will give him war. There’s no turning back. They can’t stop me and the rural people from fighting for land and justice. His first 100 days in office is checkered with agrarian injustice, scores of human rights violations, triple platinum corruption and extreme disregard of people’s rights and welfare. This regime of Aquino is doomed,” added Gonzalez. END_OF_DOCUMENT_TOKEN_TO_BE_REPLACED