Over 300,000 teenage school leavers in Zimbabwe are currently working for Chinese shop-owners. One of them, Meagan Ngwenya, claims to be heavily exploited.

Meagan Ngwenya (18) is an orphan who has already worked for a variety of Chinese employers. She accuses them of unfair labour practices.

Ngwenya spoke to RNW at her current Chinese-run shop which sells clothing and vehicle-parts. “Since 2012, a year after I dropped out of school, I have been working for one Chinese boss after the other; often for little or no payment, which renders life hard for me.”

She claims to have been exposed to cruel treatment and extremely long working hours. “There are limited formal jobs here and I have found it hard to secure one, and as a result I continue to toil in shops owned by Chinese. This is my sixth job working for Chinese shop owners.”

END_OF_DOCUMENT_TOKEN_TO_BE_REPLACED

[A few years back, some Indian government people released a statement that “the Maoists” (which the government calls ay radical movement in tribal areas) have a lot of child soldiers.  To some extent, the government in saying this is reacting to and slandering the youthfulness of rebellion.  Because young people in India’s tribal areas become politically active and join political movements against the conditions they have been born and grown up in, the ranks of rebellious and revolutionary movements are filled with young people.  But the fact that the police force young people to leave school and work for the police, reveals what the police really think of children, as they have created an unschooled “child police” force which, one can only predict, will backfire in many ways. — Frontlines ed.]

For India’s child police, work trumps school
Children of officers killed on duty are given jobs to provide for families, but their studies take a backseat.
Shuriah Niazi, Al Jazeera, 14 Sep 2014

Raipur, India – Children as young as five are being required to work for the police force in central India despite prohibitions on child labour in the country’s constitution.

At least 300 “child police” work in police departments across Chhattisgarh state in what officials insist is a compassionate policy to provide an income for the families of officers killed on duty. END_OF_DOCUMENT_TOKEN_TO_BE_REPLACED

[Photo:  Homeless people share a makeshift shelter with their cattle]

Rights groups have said that India is to face “enormous human rights challenges” ahead of a UN review in Geneva tomorrow.

With the Human Rights Council set to conduct its second periodic review, Miloon Kothari, convener of the Working Group on Human Rights in India, said yesterday that the world’s second most populous country must improve on everything from poverty and housing to abuse against women and child trafficking.

“Given the enormous human rights challenges faced by India, the second Universal Periodic Review offers India an opportunity to admit its shortcomings and offer to work with the UN, civil society and independent institutions in India toward implementation of national and international human rights commitments,” Kothari, who is also a former UN special rapporteur on adequate housing in India, said at a Commonwealth Human Rights meeting in New Delhi.

More than 40 percent of children under five are under weight, he said, while India still has the highest number of malnourished people in the world at 21 percent of the population.

“While the average growth rate [in India] between 2007 and 2011 was 8.2 percent, poverty declined by only 0.8 percent,” said Kothari, adding that if India applied globally accepted standards of measurement the nationwide poverty rate would be close to 55 percent. END_OF_DOCUMENT_TOKEN_TO_BE_REPLACED 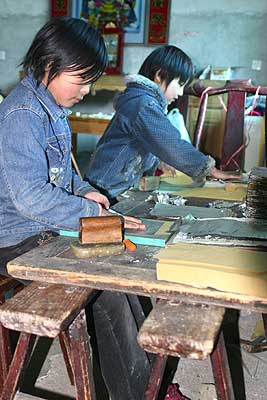 The International Labour Organization estimates that there are 215 million children around the world engaged in work. No one knows for sure how many children are working in China because the government does not publish such data, but the recent signs are worrying.

Several participants at a seminar in Shenzhen last week indicated that the use of child labour was on the rise again, particularly since the implementation of the Labour Contract Law in 2008. Children were primarily employed by factories as a means of cutting costs.

“Factory managers don’t really care whether their workers are under the legal working age of 16, especially when there is a shortage of labour,” one NGO worker at the seminar said. Some employers don’t check the age of workers, and just take the word of other family members, he said.

Children are employed in a wide range of industries but predominately in sectors that need to hire large groups of low-skilled workers on a seasonal basis, such as the food processing industry.

One participant of the seminar said she had been to a factory where almost half of the 1,000 workers were children. While another NGO found that more than ten percent of the workers in two glass factories surveyed in Shanxi were children.

Most child workers are 14 or 15 years old, but some seminar participants reported that they have seen children as young as eight. Many children start work because they lost interest in studying and dropped out of school, usually with the consent of their parents. However, families are more willing to let their daughters, rather than their sons, drop out of school and work for the family. In many cases, daughters are expected to work to support their brother’s studies. END_OF_DOCUMENT_TOKEN_TO_BE_REPLACED

Lost Children of the Prophet

Madrassas are the cornerpiece of Muslim community life. In a disturbing twist, some of them are being used as transit shelters for child trafficking. Or worse, doubling up as sweatshops themselves. NEHA DIXIT reports

IN SHAKURPUR Basti, a teeming Muslim-dominated, workingclass neighbourhood in North Delhi, there is a four-storey building with a mosque on the ground floor. This is the Darul Ujloom Nizamia Ghausul Uloom Madrassa. On the face of it, there is nothing to set this madrassa apart from an estimated 35,000 madrassas in the country. But unknown to the community, the Darul Ujloom madrassa is subverting its foundational pact with both Allah and his followers.

In many ways, madrassas are a cornerpiece in Islamic community life. They are seminaries where children go for religious education, and in poor neighbourhoods, for non-formal schooling. Most madrassas in India are affiliated either to the Deobandi, Barelvi or Ahl-i-Hadith sects and are funded by zakat — the com- passionate Islamic practice of people donating 2.5 percent of their income to support hospitals, charities or Islamic schools. Zakat donated to madrassas is meant to pay for maulvis’ salaries and free meals, clothing, books and lodging for children.

In keeping with this tradition, the Darul Ujloom Madrassa, set up in 1992 by three maulvis of the Barelvi sect, is supposed to house 150 poor Muslim children and provide them with shelter, education and food. Far from doing this though, in a disturbing twist, TEHELKA found that the Darul Ujloom Madrassa was illegally sending its minor children out to work harrowing twelve hour shifts at nearby factories and sweatshops. END_OF_DOCUMENT_TOKEN_TO_BE_REPLACED