Ten whole years ago, back in July 2005 when the Black Agenda Report crew was still at Black Commentator, I wrote that

“With under 5 percent of the world’s people, the US accounts for 25 percent of the planet’s prisoners.  More than half its 2.2 million prisoners come from the one eighth of its population which is black.  Today, an astounding 3 percent of all African Americans languish in prisons and jails, and nearly as many more are on probation, parole, bail, house arrest or court supervision… Right now, the shadow of prison squats at the corners of, and often at the center of nearly every black family’s life in this nation.”

Yesterday President Obama repeated some of these same figures, and they are pretty much the same. Total US prisoners are still 2.2 or 2.3 million, and a slight drop in the black incarceration rate makes us now a little less instead of a little more than half, but the overall picture is unchanged in a decade. The president then announced the release of forty-some nonviolent federal drug offenders out of a total of about 70,000, and stopped in at a federal prison Thursday. The same day, ex-president Bill Clinton offered a half-hearted “apology” for his 1990s crime bills, which he admitted “set the stage” for state and federal governments to nearly double the US prison population.

Why? Why did President Obama wait six and a half years into his presidency to say the basic damning numbers and free a token handful of drug war prisoners? And how come Bill Clinton, fifteen years out of office chose this week to publicly admit that black mass incarceration was maybe not the best public policy?

END_OF_DOCUMENT_TOKEN_TO_BE_REPLACED

[Not all our readers may know, The Onion is a satirical newspaper in the US, which through its humorous twist on events manages to reveal the many essential truths that lurk beneath the surface of the official stories. — Frontlines ed.]

Obama says the case for war outlined in the George W. Bush Presidential Library and Museum is “clear and undeniable.”

The president told reporters that the museum’s numerous displays provided illuminating information concerning the ongoing threat posed by Iraq and the necessity of re-deploying combat troops in order to bring stability and lasting democracy to the troubled country. END_OF_DOCUMENT_TOKEN_TO_BE_REPLACED

The two corporate political twins, Barack Obama and Bill Clinton, held forth at a joint White House press conference – so tightly matched that no light could be seen to shine between them. Obama soon ceded the room to his comrade in collaboration with Republicans, the senior triangulator.

Although competitors, Obama and Clinton “emerged from the same political system, and fed at the trough of the same wealthy individuals and corporate campaign check bundlers.”

It is rare for the corruption of the American political system to be revealed openly and clearly, but that is exactly what took place at a White House press briefing last week. The sight of the current president ceding the spotlight to a former president and one time rival was indeed unique, but its significance was not mere theater.

The 2008 election, which pitted Barack Obama against Hillary Clinton in the Democratic primaries, was despite the sound and fury, a fight amongst political twins. The Clinton/Obama press conference proved that beyond a doubt.

When Obama made common cause with Republicans and renewed tax cuts for the wealthiest people in the country, he made it clear where his sympathies lie, and they are not with the plight of working people. The tax capitulation was blatant and the president made his situation worse by openly insulting any Democrats who dared to question him.

Barack Obama’s ability to get unqualified support from Democratic progressives is officially toast, and his dependence on Bill Clinton to get him out of the doghouse is proof. His high handed and dismissive behavior of Democratic critics was the last straw for many people who had previously been his defenders. END_OF_DOCUMENT_TOKEN_TO_BE_REPLACED

[The struggle for self-determination of Haitian grassroots forces has been a long and difficult one.  Largely built in and around the Lavalas movement, these forces have faced obstacle after obstacle–from the US and France with the overthrow of President Aristide (whose administration at least provided some maneuvering room for grassroots initiatives); then with the comprador power relations set with the present President Preval (and enforced by the brutal “humanitarian” occupation of UN forces led by Brazil); then with the earthquake disaster bringing back the open face of US military occupation (and the foreign NGO administration of “aid” which has systematically prevented local grassroots initiatives and maintained Haitian dependency on foreign powers).  Now, to give a confusing “local” disguise to this dis-empowerment, rapper Wyclef Jean has declared his candidacy for Haiti’s next president.  This article, by a US advocate of the Haitian people’s struggle, breaks it down.-ed.] 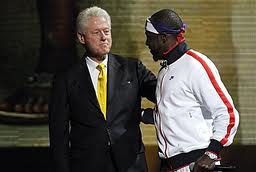 To cut to the chase, no election in Haiti, and no candidate in those elections, will be considered legitimate by the majority of Haiti’s population, unless it includes the full and fair participation of the Fanmi Lavalas Party of President Jean-Bertrand Aristide.

Fanmi Lavalas is unquestionably the most popular party in the country, yet the “international community,” led by the United States, France and Canada, has done everything possible to undermine Aristide and Lavalas, overthrowing him twice by military coups in 1991 and 2004 and banishing Aristide, who now lives in South Africa with his family, from the Americas.

A United Nations army, led by Brazil, still occupies Haiti six years after the coup. Their unstated mission, under the name of “peacekeeping,” is to suppress the popular movement and prevent the return to power of Aristide’s Lavalas Party. One must understand a Wyclef Jean candidacy, first of all, in this context. END_OF_DOCUMENT_TOKEN_TO_BE_REPLACED

Nazareth: There is one video Benjamin Netanyahu, the Israeli prime minister, must be praying never gets posted on YouTube with English subtitles. To date, the 10-minute segment has been broadcast only in Hebrew on Israel’s Channel 10.

Its contents, however, threaten to gravely embarrass not only Mr Netanyahu but also the US administration of Barack Obama.

The film was shot, apparently without Mr Netanyahu’s knowledge, nine years ago, when the government of Ariel Sharon had started reinvading the main cities of the West Bank to crush Palestinian resistance in the early stages of the second intifada. END_OF_DOCUMENT_TOKEN_TO_BE_REPLACED