Further asserting their consolidation in Balangir district and other parts of western Odisha, the Chhattisgarh-Odisha State Committee of the CPI-Maoist on Monday called a 24-hour bandh affecting normal life in Balangir, Bargarh, Nuapada and other western Odisha districts. The bandh came demanding halt to anti-insurgent operations, release of Maoists and innocent tribals from jails and opposing the proposed constitution of NCTC.

According to reports, in Ghunsar village, the generator of Airtel tower was burnt down by the Maoists which was preceded by road blockades between Khaprakhol and Lathor and Khaprakhol and Nuapada. They also set fire to a kendu leaf godown in Khaprakhol block area. SP R Prakash said the blockades were cleared in the morning.

Police seized posters and registered a case in connection with the burning incident. Only after investigation, will it be known who burnt the generator of the cell phone tower, Prakash said.

The 24-hour bandh had its impact on the western Odisha districts with vehicular traffic of all kinds coming to a grinding halt even as business establishments and Government offices were open in many parts during the day.

A report from Nuapada said that bus service was paralysed resulting in no movement from Nuapada to Padampur and Chhattishgarh to Khariar. 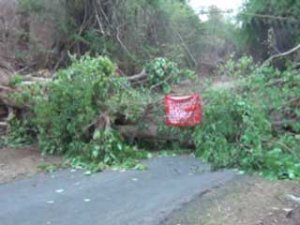 Trees have been felled to disrupt traffic with communication from Laxmipur to Narayanpatna and towards Bandhugaon completely blocked. Though the bandh was called on short notice, the impact has been unprecedented in the backdrop of kidnapping of Jhina Hikaka. The mediapersons covering the event too are hauled up in the jungles of Naryapatana.

The Maoists are protesting the entry of military from Chhattishgarh and have demanded withdrawal of the forces. Besides, they have asked for a ban on liquor in tribal areas, land rights for tribals and closure of paramilitary forces camps in the region. On Thursday night, the Maoists had set construction vehicles of a contractor afire at Pendajam village under Semliguda police limits.

In a tragic incident, three police personnel died Thursday and three others got critically injured in a landmine explosion at Naxal-infested Kandhamal district.

The incident took place near Srirampur in Kandhamal when the vehicle, in which six police men were traveling, blew up in the landmine explosion, suspected to be triggered by the Naxals.

Critically injured persons, including two constables and one home guard, were first admitted to the local hospital and later, airlifted from Baliguda to Cuttack for further treatment. The dead bodies were sent to Phulbani.

The police personnel, comprising jawans of Central Reserve Police Force (CRPF), bomb disposal squad and the police scientific team were on their way to investigate yesterday’s landmine explosion at Kandhamal when their vehicle was blown up by the landmine on Thursday. In yesterday’s explosion one person was killed, said DIG R K Sharma. END_OF_DOCUMENT_TOKEN_TO_BE_REPLACED

Fourmonths ago, on August 8, 2011--Police arrest former People's Liberation Army Maoist combatants who were disqualified by the United Nations Mission in Nepal in 2007 as they chant slogans against the government in Katmandu, Nepal

The Maoist ex-combatants had warned of stir and agitations expressing dissatisfaction that the state has dragged them out of the cantonments labeling ‘disqualified’ in an indecent and discriminatory manner.

At a press conference, Bharat Rokaya, central secretary of Disqualified People’s Liberation Army was heard saying, “The party used us for ten years to fight in the people’s war and now it has left us in the lurch.”

They have launched general strike putting forward various demands such as the removal of tag of ‘disqualified’ labeled to describe them, their proper management, disclosure of fund that came from the United Nations (UN) in the name of combatants, among others.
http://www.thehimalayantimes.com/fullNews.php?headline=Disqualified+PLA+combatants+impose+Far-west+bandh&NewsID=314384&a=3

DHANGADHI: Normal life of Kailali district has been hit hard on Thursday due to the Bandh called by ex-PLA combatants of the UCPN-Maoist, who are on agitation demanding implementation of past agreements made with the government.

All educational institutions, transport services and business sectors have been completely shut down from the bandh.

Ex- PLA Combatants said that they have been on agitation to implement the agreement made with the government saying they have been displaced from the society in the name of rehabilitation.

They further said that no progress have been done as per the four-point agreement such as removal of the tag of ‘disqualified’ labeled to describe them, their proper management and to provide lump some economic package.

About 272 combatants were disqualified while carrying out their verification at seven division offices of Maoist Army at Talbandi of Kailali district.

Jhargram, Sept. 27 — PCPA activists raised blockade on State Highway nine at six places between Lodhasuli and Jhargram on the second day today of their 48-hour bandh in the Junglemahal areas.  Official sources said the activists blocked the highway by felling trees. These were removed by the security forces in the morning.

The bandh paralysed life in the Junglemahal areas of West Midnapore, Purulia and Bankura districts for the second consecutive day.  The People’s Committee Against Police Atrocities (PCPA) was protesting alleged atrocities against innocent villagers by the combined forces.

Roads wore a deserted looks, while shops and business establishments kept their shutter down. Educational institutions remained shut and attendence in government offices was thin.  Despite the threat by the PCPA that they would target railways, train services were normal.

SDO Jhargram C Murugan said, ”Life has been paralysed in West Midnapore, Purulia and Bankura districts. No untoward incident, however, has been reported so far.”

Incidentally, a Maoist and a CRPF jawan lost their lives in an encounter on Saturday.

Naxalites have decided to train their guns against Multinational Companies (MNCs) operating in India.

In a statement sent to select media houses today, the CPI-Maoists have declared that they would “rise up as a collective fist to drive out MNCs” from the country. The statement also reiterates that their mission is to wipe away the “treacherous rotten regimes” at the Centre and the states.

The Naxalites have said because mining activities by corporates have not benefitted the tribals it is justified to launch an armed struggle. However, government reports claim local leaders of the insurgent groups regularly extort hefty sums from miners to allow them to do business.

The tirade against the MNCs has come in the backdrop of the Bhopal gas tragedy verdict. Launching a scathing attack against the government and corporate India, Naxalite spokesperson Azad said, “We appeal to all democratic forces to unite, oppose and militantly resist the continuous sell-out of the country’s interests to imperialistsharks. Time is running out. Unless we act collectively against the disastrous policies of the traitorous UPA government and various state governments we cannot prevent the whole of India from becoming a Bhopal.” END_OF_DOCUMENT_TOKEN_TO_BE_REPLACED