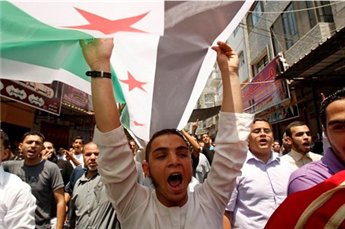 By Budour Hassan
On July 14, thousands of Palestinian refugees marched in a funeral procession for 11 unarmed protesters shot dead by Syrian security forces in the al-Yarmouk refugee camp. Raucous and seething with rage, mourners chanted for Syria and Palestine, called for the downfall of Bashar Assad’s regime, and sang for freedom.Whether this burgeoning civil disobedience movement will grow into an open, durable rebellion remains to be seen, but the significance and the potential influence of the latest wave of protests that has swept Syria’s largest Palestinian camp cannot be overlooked.As the Syrian uprising gathered momentum and the Syrian regime escalated its repression against what started out as a peaceful revolt, concerns have emerged about the impact of the uprising on Palestinian refugees in Syria, who make up just over 2 percent of Syria’s total population.

The Palestinian political elite in Syria have been divided. Some factions have desperately attempted to appear neutral, distancing themselves from the unrest. Others, such as Ahmad Jibril’s PFLP-GC, Fatah al-Intifada, and the Palestinian-Baathist militia al-Sa’iqa, have actively supported the regime, bolstering its propaganda campaigns and crushing civil dissent inside the camps.

In stark contrast to the moribund, aging political leadership, Palestinian-Syrian youth activists, who prior to the eruption of the uprising had focused their activism on Palestine, have participated in the uprising since the very beginning as demonstrators; organizers of aid and relief work for wounded and internally-displaced Syrians; or as citizen journalists, photographers and media activists. The hub of their activism, however, remained outside the camps for most of the uprising.

Never were the tensions among Syria’s Palestinians as discernible as during the aftermath of last year’s Naksa Day protests on June 5, when dozens of unarmed Palestinians were killed by the Israeli occupation army in the occupied Golan Heights border area. Yarmouk inhabitants and martyrs’ families set the PFLP-GC building ablaze in a strong denunciation of the faction’s role in mobilizing to instigate the youths to march back home without any protection despite the anticipated deadly reaction by the Israeli army.

The faction engaged in a pathetically naked attempt to deflect attention from the regime’s crackdown. Several Palestinians were killed in the clashes that ensued between Yarmouk residents and armed PFLP-GC gunmen following the funeral. However, with the exception of the Syrian navy’s attack on the al-Raml refugee camp last summer and the occasional Syrian army shelling on refugee camps in Daraa, Hama and Homs, the situation in the refugee camps remained cautiously quiet.

Intifada in the camps

Since February, the al-Yarmouk camp has regularly held protests in solidarity with the besieged Syrian cities and towns. It participated in the Damascus general strike on May 29, 2012. The protests would normally pass quietly without being attacked by Syrian security forces.

The straw that broke the camel’s back was the abduction and then killing of 13 Palestinian Liberation Army fighters from the Nayrab refugee camp in Aleppo. END_OF_DOCUMENT_TOKEN_TO_BE_REPLACED