Armed ANC members acting with police support now openly attack people struggling against corruption and for land in Cato Crest. They are even hiring assassins

On Sunday 28 September 2014 the ANC Ward 74 councillor Nolubabalo Mthembu called an ANC meeting to discuss ways of replacing the Land Invasion Unit with an ANC demolition team. This meeting took place at the Lamontville Community hall in the afternoon at around 1pm. The Task Team Committee was launched to carry out the illegal eviction of the nearby Sisonke settlement. Sisonke Village, formerly known as Madlala Village, made headlines early this year when they approached the Constitutional Court after they had been subjected to more than 24 illegal evictions.

The Constitutional court found that the Eviction Order obtained by the Member of the Executive Council, Ravi Pillay, was invalid as it was made in breach of the Constitution. The court also found that the eThekwini Municipality [one of the 11 districts of KwaZulu-Natal province of South Africa, covering the City of Durban and surrounding towns] had lied to the Court and referred the matter back to Durban High Court. We are still waiting for the High Court to make a ruling on the matter. It is clear that replacing the Land Invasions Unit with ANC members is a tactic to avoid legal accountability for evictions. We saw a similar strategy at the Marikana Land Occupation in Cato Crest on Friday 26 September when ANC members began demolishing shacks. They also attacked one of our members with a spade.

In 2009 repression by the police was replaced with repression by armed ANC members acting with police support. Last year Willies Mchunu openly called for ANC members to act directly against people struggling against corruption and for land in Cato Crest. Since last year izinkabi (assassins) have also been used to repress us. END_OF_DOCUMENT_TOKEN_TO_BE_REPLACED

The Marikana Massacre and The South African State’s Low Intensity War Against The People
by Vishwas Satgar, Defending Popular Democracy 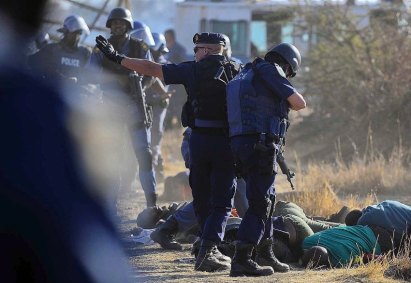 On Thursday, August 16, police officers fired into the crowd with automatic weapons. When it was over, 34 miners lay dead. Here, police check the bodies of dead mineworkers.

The massacre of the Marikana/Lonmin workers has inserted itself within South Africa’s national consciousness, not so much through the analysis, commentary and reporting in its wake.  Instead, it has been the power of the visual images of police armed with awesome fire power gunning down these workers, together with images of bodies lying defeated and lifeless, that has aroused a national outcry and wave of condemnation. These images  have also engendered international protest actions outside South African embassies. In themselves these images communicate a politics about ‘official state power’. It is bereft of moral concern, de-humanised, brutal and at odds with international human rights standards; in these ways it is no different from  apartheid era  state sponsored violence and technologies of oppressive rule.  Moreover, the images of police officers walking through the Marikana/Lonmin killing field, with a sense of professional accomplishment in its aftermath, starkly portrays a scary reality: the triumph of  South Africa’s state in its brutal conquest of its enemies, its citizens.

At the same time, the pain and suffering of the gunned down workers has became the pain of a nation and the world; this has happened even without the ANC government declaring we must not apportion blame but mourn the dead. In a world steeped in possessive individualism and greed, the brutal Marikana/Lonmin massacre reminds us of a universal connection; our common humanity.  However, while this modern human connection and sense of empathy is important, it is also superficial.  This is brought home by a simple truth: the pain of the Marikana/Lonmin workers is only our pain in their martyrdom. They had to perish for all of us to realise how deep social injustice has become inscribed in the everyday lives of post-apartheid South Africa’s workers and the poor. The low wage, super exploitation model of South African mining, socially engineered during apartheid, is alive and well, and thriving. It is condoned by the post-apartheid state. This is the tragic irony of what we have become as the much vaunted ‘Rainbow nation’. END_OF_DOCUMENT_TOKEN_TO_BE_REPLACED 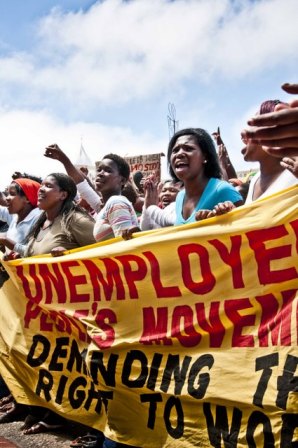 The Unemployed People’s Movement (UPM) was formed in August 2009 to respond to the crisis of unemployment and the commoditization of essential services in a society dominated by corruption and greed. As Steve Biko said, we blacks are tired of standing at the touchlines to witness a game that we should be playing. We want to do things for ourselves and all by ourselves. This is a realisation that we are the protagonists of our lives and nobody will free us but ourselves; we – the unemployed – will have to be our own liberators.

Despite celebrations of freedom on 27 April every year, severe and widespread poverty persists. Our education system is in tatters, the future of many black kids has been declared futureless. Unemployment is sky rocketing, wasting the talents of many young people who are condemned to a life of permanent poverty. Many black people continue to lack access to electricity, clean water and proper sanitation. Many are terminally under nourished. All these things are happening when the elite and the government officials are living affluent lives. The president has just built a mansion in Enkandla to the tune of more than R400m. Malema has also built a house to the tune of R16m. Every weekend the elite host parties and weddings that cost no less than a million while the people they claim to represent go to bed on an empty stomach and live in absolute poverty. They do not find this morally troubling. They have no conscience, otherwise they would not have killed Andries Tatane and many other activists; they would not shoot us with rubber bullets when we protest because they have neglected us. The prophetic Biko was spot on again when he once said ‘Tradition has it that whenever a group of people has tasted the lovely fruits of wealth, security and prestige it begins to find it more comfortable to believe in the obvious lie and accept that it alone is entitled to privilege.” It is this prestige and wealth that forms a hard shell around their consciousness so that they do not see that it is fellow human beings suffering in the poverty around them. Karl Marx put it in a different tone: “History repeats itself, first as tragedy, second as farce”. Apartheid was a tragedy, but our economic apartheid is a farce. Indeed history repeating itself. We are repeating the disaster of the post-colonial regimes that Fanon attacked fifty years ago.