[As this article points out, the selectively partisan focus of organized “gay rights” organizations amounts to ‘helping the Obama administration throw Bradley Manning under the bus’ for reasons of political convenience.  “Just as much of the anti-war movement was “anti-war” only when a Republican president was leading the wars, much of the gay movement is pro-gay only when it’s non-Democrats who are anti-gay.”  This is an important barometer by which to measure the progressive credentials of this increasingly pro-imperialist “rights” movement–the politics of which has changed considerably from its early days. — Frontlines ed.]
—————————————-
Counterpunch Weekend Edition, February 22-24, 2013
In Failing to Support Bradley Manning, Gay NGOs Betray Their Own Mission Statements and Fail to Promote an Inclusive Justice Agenda
by ANDY THAYER

One of the signature traits of LGBT subculture in the United States is its adoration of celebrity.  If a well-known person voices the most milk-toast notion that gays are human beings, let alone deserving of legal equality, banner headlines in the gay press are guaranteed.  If the celebrity comes out as gay, even more effusive coverage is given.

Any number of fading stars and starlets, and non-entities on the make, from Lady Gaga to Chaz Bono to Ricky Martin, have mined the LGBT community to support their careers. Our community’s eager rush to embrace just about any celebrity who deigns to notice our existence is emblematic of our lack of self-esteem, our internalized homophobia.

Activists March for Bradley Manning at the 2011 San Francisco Pride Parade. But gay “establishment” has raised not a finger in Bradley Manning’s defense

So why is it that all of the big gay non-profits, from the National Gay & Lesbian Task Force (NGLTF) to the Human Rights Campaign (HRC) – “Gay Inc.” – have failed to utter a word of support for Private Bradley Manning, let alone really campaign for him?

He’s gay, has moderately high name recognition, and unlike any number of air-head celebrities, he’s actually done something to support social justice, rather than mined charitable causes for personal fame and fortune.

Manning’s contributions to human rights have been recounted frequently enough to require only a brief recitation here.  He exposed U.S. war crimes in Iraq [2] [3] [4] and Afghanistan.  His exposure of the corruption of the oligarchy in Tunisia helped kick off the ‘Arab Spring,’ toppling U.S.-supported dictators around the region. END_OF_DOCUMENT_TOKEN_TO_BE_REPLACED

Some 200 people rallied at a Raleigh shopping center Oct. 17 to support a lesbian couple. A security guard had ejected the couple from the property three days earlier for displaying affection towards one another.

Holding signs which read, “Being OUT Saves Lives” and “Bullying: Just Another Word for Violence,” the energetic crowd denounced the ejection as yet another incidence of bullying and oppression of lesbian, gay, bi, trans and queer people.

Caitlin Breedlove, one of the women ejected from the Cameron Village Shopping Center, connected issues of privatization of public space with the rights of oppressed people. Speaking to the demonstrators, she said that “even on private property, LGBTQ people have the right to respect and safety. Only by reclaiming public space as our own, so we can be who we are everywhere!” END_OF_DOCUMENT_TOKEN_TO_BE_REPLACED 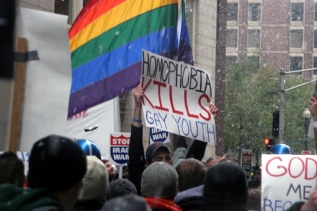 Against Bullying or On Loving Queer Kids

When I read that 18-year-old Rutgers freshman Tyler Clementi had committed suicide by jumping off the George Washington Bridge after two other students posted a video of him having sex with another man online, my heart dropped. Tyler grew up in New Jersey and played the violin, and I did too.

I don’t know what life was like for Tyler before he chose to end it, but my early high school years were spent improvising survival strategies. I mentally plotted the corridors where the jocks hung out and avoided them. I desperately tried to never go to the bathroom during the school day. I was Asian and gay, stood 5’2″, weighed 95 pounds and when I got excited about something—which was often—my voice cracked into a register normally only heard among Hannah Montana fans. If it weren’t for the fact that I ran really fast and talked even faster and enjoyed the protection of a few popular kids and a couple of kind-hearted teachers—well, it’s not hard to imagine a similar fate.

I say all this not to elicit pity—I’m a bigger boy now, and I bash back—but to make it clear that I’m conditioned to abhor people who bully queer kids. There’s nothing—nothing—that raises my hackles more than seeing an effeminate boy being teased. But I also find myself reluctant to join the chorus of voices calling for the law to come down hard on Dharun Ravi and Molly Wei, the Rutgers students who posted the video and who are now facing “invasion of privacy” charges. If convicted they could face up to five years in prison; some gay rights groups like Garden State Equality are calling for the two to be prosecuted under New Jersey’s hate crimes law, which could double the sentence. END_OF_DOCUMENT_TOKEN_TO_BE_REPLACED

[The bitter divisions of racism, religious arrogance, and xenophobic privilege which are fostered in our communities have paralyzed  many people  from recognizing their interests and uniting to fight.  Attacks on immigrants, Arabs and Muslims are further inflamed with every day,  and bullying attacks on gay and lesbian youth have led to more suicides. The Gay-Straight Alliance is an important beginning effort enabling people to challenge this bullying with empowerment strategies.–ed.]
Press Release, GSA Network

San Francisco, October 3, 2010 – In response to many recent suicides by LGBT youth, Gay-Straight Alliance Network is launching the Make It Better Project to give youth the tools they need to fight back against anti-LGBT bullying and make schools safer for LGBT youth.

LGBT youth suicides made headlines in September as anti-gay bullying drove a number of young teens to take their lives – including Seth Walsh, 13, in California; Asher Brown, 13, in Texas; and Billy Lucas, 15, in Indiana. END_OF_DOCUMENT_TOKEN_TO_BE_REPLACED 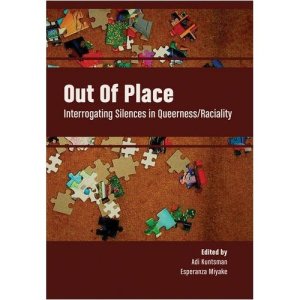 Out Of Place. Silencing Voices on Queerness/Raciality

‘Out of Place: Interrogating Silences in Queerness/Raciality’ (Raw Nerve Books) came out in July 2008. The book presents an unprecedented compilation of critical articles by scholars and activists, which address the manifold ways in which questions regarding ‘race’ and racism are silenced in queer politics and theory. ‘Out of Place’ was very well received. It found a wide readership and the first edition sold out in a bit over a year. Now for the bad news: The book is no longer available. Raw Nerve Books, a small independent feminist publisher, decided not to produce a second edition.

While the book has received a lot of positive interest, it is also controversial and challenging. Indeed many new ideas that challenge prevailing ways of thinking and enacting power relations are not welcomed by everyone when they are first voiced. One chapter in particular ignited controversy, leading to a public apology by the publisher, who in the same breath declared the volume out of print.

The chapter in question is an essay entitled ‘Gay Imperialism: Gender and Sexuality Discourse in the ‘war on terror” by Jin Haritaworn, Tamsila Tauqir and Esra Erdem. In this chapter, the authors present an analysis of how ideologies regarding gender oppression and homophobia can be mobilised to feed a self-image of western democracies as the harbingers of gender equality and sexual liberation by deploying anti-Muslim racist discourses identifying Islam as the cradle of sexism and homophobia. The claims that Islam condones the oppression of women and legitimises violence towards homosexuals have played a significant role in justifying the wars in Afghanistan and Iraq and more generally the ‘war on terror’ in all its political, legal and cultural manifestations.

In their analysis, the authors criticise (among others) some publications and political actions by Peter Tatchell and the activist group OutRage! It appears to us that Peter Tatchell demanded a public ‘apology and correction’. We can only speculate on why Raw Nerve chose to publish an unusually long and detailed statement to Tatchell on their web page, which labels the article libellous for containing ‘untrue’ and ‘defamatory’ claims. The ‘apology and correction’ voices Tatchell’s concerns and presents a one-sided interpretation of the text, illustrated by short fragments taken out of context and suggesting arguments that, in our view, the article does not make [http://www.rawnervebooks.co.uk/Peter_Tatchell.pdf].

We consider the article to be an important contribution to the volume and current debates about gender and sexual politics. We wish critics read the article first before coming to any judgemental conclusions. As authors of a chapter in this collection we are extremely concerned by the way Raw Nerve Books has handled this conflict, solely giving voice to one single interpretation and denying the second edition of this book. We as authors of a chapter in the book have not been consulted by Raw Nerve, nor has Raw Nerve opted for an approach in which it represents the wide range of opinions expressed in this book. As authors we feel we have been denied the academic freedom to present our critical analysis to the public and instead silenced.

Raw Nerve presents itself as an ‘independent, not-for-profit feminist press publishing controversial, under-represented and experimental work’. They set out with the important aim ‘to inspire new discussions’ by ‘asking questions that might indeed touch a ‘raw nerve’ with many readers.’ (http://www.rawnervebooks.co.uk/). The reaction to the article shows that the authors certainly touched on a raw nerve with their critique here. Yet what we as authors of a chapter in the collection envisage in the case of controversy is critical and open debate rather than foreclosing such debate by treating opposed views as libellous. When authors are confronted with the threat of a law suit, this forecloses open debate. If such debate cannot include disagreements and conflicts of opinion, it takes self censorship for granted.

Ironically, this conflict illustrates what the collection “Out of Place: Silencing Voices on Queerness/Raciality” addresses. While postcolonial and transnational interventions into feminist debates have found a wider audience, writing on queer sexualities and politics from an anti-racist perspective is still rare these days. The decision of the publishers not to publish a second edition results in a de-facto act of censorship, which further marginalises already precarious perspectives. Putting pressure on publishers, editors and authors to silence un-wanted opinions endangers critical debate based on freedom of expression. We are worried about an emerging culture in which libel threats may be habitually used to silence critical voices. We are disappointed with Raw Nerve Books’ decision to publish this one-sided statement and to not print a second edition of ‘Out of Place’.