Hong Kong has spent billions on buying weapons from Britain

Critics are calling for the UK to end all arms sales to Hong Kong immediately. Photo: Bloomberg

The British government’s role in licensing the sale of arms to Hong Kong that could be used for “internal repression” has come under scrutiny.

John Stanley, chairman of the Committee on Arms Export Controls, has written to Business Secretary Vince Cable, asking him to clarify if “Made in the UK” tear gas canisters were used against pro-democracy protesters.

The letter, dated October 21, also contains a list of approved British export licences of lethal weapons to Hong Kong since 2012. Grenade launchers, mortar bombs, sniper rifles, machine guns and gun silencers are among the weapons, according to the committee’s analysis. 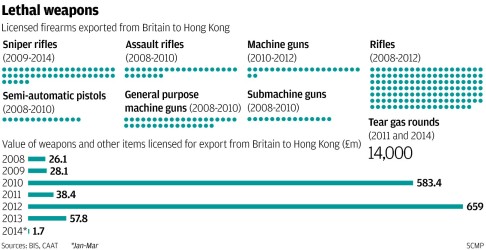 Since 2008, £1.4 billion (HK$17.4 billion) worth of licences for arms and equipment sales to Hong Kong have been approved, according to official records.

A British government review of weapons licences to Hong Kong is under way – and could end these exports.