[The Communist Party of Nepal-Maoists have launched a campaign against Indian domination of trade, transport, and culture in Nepal.  The Associated Press reports:  “Movies theatres in Nepal have stopped screening Bollywood movies because they fear violence after a Communist Party offshoot alleged the films are vulgar and unsuitable for the Nepalese society…The Communist Party of Nepal-Maoist is demanding the government give priority to locally made movies and strictly censor Hindi films. Party spokesperson Pumpha Bhusal said Friday it was giving the government until next week to comply…In another dispute earlier this week, supporters of the breakaway Communist party gathered at border crossings to stop Indian vehicles from entering Nepal. The party later said it was going to allow trucks with essential goods like oil, gas and food to enter…(The campaign opposes relations where) Indian trucks and vehicles are allowed to enter Nepal, while Nepalese vehicles are not allowed in Indian territories.” — Frontlines ed.]

This interview was originally posted in Nepali on weeklynepal, an online Nepali news portal, then translated into English. There is a minor edit for clarity.

Are you an anti-India leader?

I’m not anti-India but inimical to the Indian oppression and hegemony. I’m not against India and the normal Indian people. Those who call me an anti-India are seriously flawed. We are internationalists and patriotic at the same time. Therefore, we have no antagonism with India and the normal Indian people. Our belief is that Nepal should not face Indian oppression. Alongside this we have opposed Nepalese puppets as well.

Who are the puppets in the nation, today?

Nepal is a semi-colonial and semi-feudal country. Post WW-II, the usual practice of direct colonisation has come to an end. In these modern days oppression and exploitation is widely maintained by inducting domestic puppets within oppressed nations itself.

Has your protest against India benefited Nepal?

Lets not take the issues that we have raised as simple as a protest. There are problems, how this government will act upon to solve these problems is the principle theme. CPN-M is a political party. We have raised issues through surfacing the problems. In the past Baburam had raised the same issues himself. If there are problems, they need to be resolved. Now, we still need to see what happens between Indian oppression and the Nepalese government. We come across problems almost every day, like the border encroachment, removal of original border pillars, installation of new border pillars in wrong places etc. Don’t we need to look at these things? END_OF_DOCUMENT_TOKEN_TO_BE_REPLACED

US ready to provide ‘limited support’ for combatant rehabilitation

The United States has said it is ready to provide” limited support for some aspects of rehabilitation” of the Maoist combatants provided Nepal’s political leadership shows readiness to take the peace process forward.

“When Nepal’s political leadership demonstrates its readiness to move forward on the final elements of the peace process, we stand ready to provide limited support for some aspects of rehabilitation such as vocational training or to help ease the transition of these young Nepalis back into civilian life,” Assistant Secretary, Bureau of South and Central Asian Affairs, Robert O Blake, said in a testimony before the House Foreign Affairs Committee, Subcommittee on the Middle East and South Asia.

The Assistant Secretary said that with the formation of the new coalition government, the USA looked forward to a re-energised commitment from all parties towards finalising the rest of the peace process, especially the integration and rehabilitation of Maoist combatants along lines agreed to by consensus among the parties.

Blake further said despite its halting pace, the peace process nonetheless remains intact, and there is no imminent threat of a return to armed violence. END_OF_DOCUMENT_TOKEN_TO_BE_REPLACED

by Mohan Nepali for Public Journalism

Re-affirming that Nepal’s power-mongering politicians have long been accepting Indian political intervention in the country, Indian Foreign Secretary Nirupama Rao has arrived in Kathmandu with a clearly stated purpose of representing the Indian role in forming a government in Nepal.

India has apparently sent her to make sure the Indian role would redouble in Nepal after the exit of the UN Mission to Nepal (UNMIN) from Nepal’s peace process monitoring and reporting role three days ago.

The visit is reported to have been concerned with quarrels among Nepali political parties and their intra-party feuds. END_OF_DOCUMENT_TOKEN_TO_BE_REPLACED

KATHMANDU: Vice-Chairman of the UCPN-Maoist Mohan Baidhya ‘Kiran’ today said the party’s sixth extended meeting had mandated it to launch a ‘people’s revolt’.

Addressing an interaction on ‘National Independence and People’s Republic’ organised by Samayabaddha bimonthly, Baidhya said the Palungtar meeting has also urged the party to fight for a people’s federal republic and national independence.

He said a communist party must be ready to split or merge with others whenever necessary. “Remaining together despite ideological and political differences is no good, for it makes the party just a joint front,” he claimed, justifying the disintegration of his party from Mohan Bikram Singh’s party earlier.

He claimed that Vice-Chairman Dr Baburam Bhattarai had begun making public the internal debates through Rato Jhilko news magazine. After this, other leaders have also started revealing the secrets, he said.

“If we were following the traditional system in practice in a communist party, leaders would have faced action for revealing the party’s secrets,” he said. All the same, Baidhya said taking the debate to the public is a good practice, though the party used to take it negatively earlier. END_OF_DOCUMENT_TOKEN_TO_BE_REPLACED 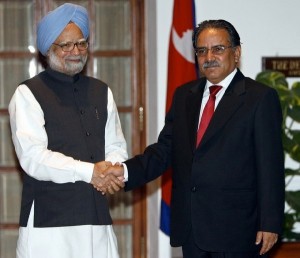 (IANS) With India assuming a seat on the UN Security Council after 19 years, Nepal’s opposition Maoist party will have to do some quick rethink of its old strategy of projecting the southern neighbour as its arch enemy.

As the former guerrillas ready for a fresh round of deliberations at their central committee meeting starting today, the voice of reason is urging the party leadership to go back on the threat Maoist chief Pushpa Kamal Dahal Prachanda made at the recently concluded plenum, calling for a war on India.

The former rebels have been banking heavily on the UN for legitimacy as a political party after staging an armed insurrection for 10 years from 1996. While signing a peace agreement with the major political parties in 2006, the Maoists insisted on the UN being part of the peace process, and from 2007 the UN Mission in Nepal (UNMIN) began to monitor their People’s Liberation Army (PLA).

After the parties and the Maoists failed to work together to disband the PLA and rehabilitate its nearly 20,000 guerrillas within six months of signing the peace agreement, the UNMIN was given several extensions by the UN Security Council. However, in September this year, the Security Council announced it would give one last extension to the UNMIN, after which it would begin to pull out from Nepal from January 15, 2011. END_OF_DOCUMENT_TOKEN_TO_BE_REPLACED

Nepal Could Lose Out on Foreign Aid Due to Political Impasse

Kathmandu – The international donor community has warned  Nepal it will withdraw aid if the political situation does not improve.

A statement issued late Tuesday by the US government’s main aid organization US Agency for International Development on behalf of the international donor community said that there was concern over the “negative development impact stemming from the slow progress in forming a new government, implementing the peace process, and writing the new constitution.” Parliament has failed 16 times attempts to elect a prime minister. “The slow pace in implementing the peace process, combined with the continued caretaker status of the government, lack of development leadership, significantly reduces most donors’ ability to secure future resources for Nepal,” the statement said.

Nepal is one of the poorest countries in the world and largely depends on foreign aid for its development. The country has been under a caretaker government since June when the prime minister Madhav Kumar Nepal resigned under Maoist pressure. A Maoist insurgency from 1996 to 2006 killed over 16,600 people. The absence of a government delayed the announcement of a full budget, affecting the administration as well as development. Donors said the announcement of a budget last week, using a special ordinance, had provided some relief but urged the completion of the peace process.

It also called on the country to “effectively deal with the other ongoing issues constraining Nepal’s development” in order to create an environment in which foreign assistance can most effectively be implemented. The statement was issued by USAID on behalf of organizations including the Asian Development Bank, a group of donor communities representing Western nations and the World Bank.

[One highlight of this interview is Prachanda’s plans to forge an agreement with the reactionary Indian regime and the Chinese imperialists  with the goals of developing closer economic ties and  satisfying  China’s and India’s “security concerns.”  As part of this strategy, Prachanda is making a trip to New Delhi on November 15 to resolve the UCPN(Maoist)’s disputes with Indiia over borders and unequal treaties, in order to lessen and eventually remove Indian opposition to the UCPNM.

Prachanda also reiterates his full support for integration of an undisclosed number of the 19,000 members of the People’s Liberation Army (who have been housed in camps for four years) into the 90,000 strong US and Indian backed Nepal Army. This is the same army that the PLA was fighting against in order to liberate 80% of Nepal’s countryside as of 2006, the year that Prachanda and the UCPNM leadership called off the people’s war in order to become an electoral party in search of a peaceful reformist path to “socialism.”—Frontlines ed]

Unified Communist Party of Nepal (Maoist)  – UCPN(M) –  has had a difficult relationship with India and other political parties in Nepal after the fall of Maoist-led government in May 2009.  The party’s  several attempts to regain power have been scuttled by its widening trust gap with various political forces.  As a consequence the peace process has been stalled and Nepal has been without a functioning government for over four months. Against this backdrop, Prachanda ( Pushpa Kamal Dahal),  Chairman of the UCPN (M),  recently visited China where he proposed to the Chinese leadership a tripartite  agreement between Nepal, China, and India.  Prachanda  spoke to Akhilesh Upadhyay and Sudheer Sharma on Saturday morning about his visit, his party’s upcoming plenum, its relationship with India, the peace process and his fall from grace.

You and your party men have been to China frequently.  Some reading it as tilting towards China.

It is not as it appears in the media.  At an ideological level, we are naturally interested in studying developments in China.  But my visits have been circumstantial.  The first time I went to the Olympics.  The second time I was there to study Chinese development. This time I was there to attend the Shanghai Expo.  Which is not just about China for the expo is, in a sense, a world expo.

It is true that while in China I had meetings with Chinese leaders.  But upon my return I divulged the content of those meetings.  Chinese leaders have always underlined the need to ensure peace and development (in Nepal).  As the largest party, they have advised us to improve ties with India.  There is no truth in the rumours about our party’s preference of China over India. END_OF_DOCUMENT_TOKEN_TO_BE_REPLACED