[Palestinians gather to commemorate Prisoners’ Day in Nablus on April 17, 2013. Palestinians across the territories are attending marches and rallies as a show of solidarity with prisoners from the West Bank, east Jerusalem and Gaza held in Israeli facilities, whose numbers according to Israeli rights group B’Tselem reach 4,713. (Photo: AFP – Jaafar Ashtiyeh)]
Wednesday, April 17, 2013

Palestinians across the territories attended marches and rallies Wednesday as a show of solidarity with prisoners from the West Bank, east Jerusalem and Gaza held in Israeli facilities.

Some 3,000 Palestinians in Israeli jails on Wednesday refused breakfast as part of a one-day hunger strike to mark Prisoners’ Day, an Israeli prison official said.

Israeli rights group B’Tselem estimates some 4,713 Palestinians are currently imprisoned by Israel.
Activists reached the Ofer prison perimeter on Wednesday morning, and tore down 50 meters of the prison fence, mounting a Palestinian flag on prison grounds.

“After around four minutes of being at the fence, Israeli soldiers showed up. They fired tear gas, rubber bullets, and sound bombs at the protesters,” Abdallah Abu Rahmeh, spokesman of the Popular Struggle Coordination Committee, told Al-Akhbar.

“It is necessary to pressure Israel to release the Palestinian prisoners and hunger strikers,” he added. END_OF_DOCUMENT_TOKEN_TO_BE_REPLACED

Six days after Arafat Jaradat was arrested by the Israeli army and the Shin Bet, he was dead. Between the date of his arrest – February 18 – and the day of his death – February 23 – his lawyer Kamil Sabbagh met with Arafat only once: in front of a military judge at the Shin Bet’s Kishon interrogation facility.

Sabbagh reported that when he saw Jaradat, the man was terrified. Arafat told his lawyer that he was in acute pain from being beaten and forced to sit in stress positions with his hands bound behind his back. 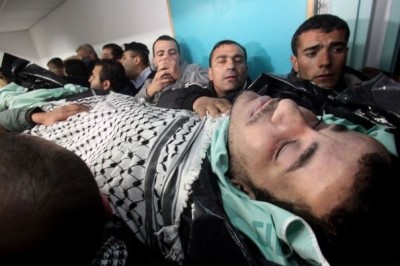 When it announced his death, Israeli Prison Service claimed Arafat – who leaves a pregnant widow and two children – died from cardiac arrest. However, the subsequent autopsy found no blood clot in his heart. In fact, the autopsy concluded that Arafat, who turned 30 this year, was in fine cardiovascular health.

What the final autopsy did find, however, was that Jaradat had been pummelled by repeated blows to his chest and body and had sustained a total of six broken bones in his spine, arms and legs; his lips lacerated; his face badly bruised.

The ordeal that Arafat suffered before he died at the hands of Israel’s Shin Bet is common to many Palestinians that pass through Israel’s prisons. According to the prisoners’ rights organisation Addameer, since 1967, a total of 72 Palestinians have been killed as a result of torture and 53 due to medical neglect. Less than a month before Jaradat was killed, Ashraf Abu Dhra died while in Israeli custody in a case that Addameer argues was a direct result of medical neglect. END_OF_DOCUMENT_TOKEN_TO_BE_REPLACED

Palestinian officials appealed to the international community on Tuesday to press the Israeli government to end its draconian administrative detention policy.

They said that this was the only way to force them to stop locking Palestinian people up in Israel for renewable terms of six months without charge.

More than 300 Palestinians are currently held in administrative detention in Israeli prisons. END_OF_DOCUMENT_TOKEN_TO_BE_REPLACED

[The falsehood of US, EU, UN, and ICC’s claims to be the advocates and defenders of international human rights is once-again revealed by this, yet another set of attacks on the human rights of people who “don’t matter and don’t count” to these global powers.  It will only stop when the people take the power away from these monsters.  —  Frontlines ed.]

The Electronic Intifada
6 July 2011
Sleep-deprived and suffering from a broken leg, 16-year-old Muhammad Halabiyeh endured days of torture at the hands of Israeli soldiers and police officers, who punched him repeatedly in the face and abdomen, shoved needles into his hand and leg and threatened the Palestinian teenager with sexual abuse.

Arrested near his home in the East Jerusalem neighborhood of Abu Dis in February 2010, Halabiyeh confessed after days of abuse and torture to the charge that he threw a Molotov cocktail at an Israeli army base. More than one year after his arrest, which was spent in Israeli custody, Halabiyeh was found guilty in an Israeli military court.

His conviction came despite the fact that the Israeli military judge in his case stated that she believed the teenager was tortured. However, the judge argued that there was no evidence that his confession was the direct result of the torture he endured. Halabiyeh’s sentencing hearing has now been postponed until 19 July.

“[The judge] said there’s no direct connection that he confessed later on in the police station because of this torture,” Sahar Francis, the director of Addameer, the Prisoners’ Support and Human Rights Association, told The Electronic Intifada. Addameer represented Halabiyeh in his trial at the Ofer military court.

“She didn’t believe that he was threatened the whole way [to the police station]. He said in the court that he was [afraid of more torture], but she decided not to give much weight [to this],” Francis added. END_OF_DOCUMENT_TOKEN_TO_BE_REPLACED

CAIRO: Palestinians in Israeli jails announced yesterday that they were declaring a symbolic one-day hunger strike in order to commemorate Prisoners’ Day on April 17. The strike was intended to draw attention to the violations of Human Rights carried out against Palestinian political prisoners.

Only days before the Israel’s Channel 2 broadcast exclusive footage on the death of Palestinian prisoner Mohammed al-Asqhar who died in Israeli prisons in 2007. The footage shows how detainees were called for a surprise surge at 2 a.m. When prisoners protested, the Israeli Control and Restrained Unit, also known as Masada, shot at them. The video shows how Masada officers told the prisoners that the firing would stop if all the prisoners would leave their tents. However, when the prisoners left their tents shooting continued.

Mohammed al-Ashqar died after being shot in the head at close range, and at least a dozen other inmates were wounded. According to Al Jazeera correspondent Nisreen El-Shamayleh, “the operation was intended to be a morale booster for Masada.” END_OF_DOCUMENT_TOKEN_TO_BE_REPLACED

January 30, 2011
Scores of prisoners, possibly in their thousands, have managed to escape from Egyptian jails in the chaos caused by mass protests across the country. Among those escaped prisoners are some Palestinians from the Gaza Strip.

Al Jazeera’s Nicole Johnston speaks to one of the escapees – a member of the Army of Islam. He is back at home in Gaza after spending three years at a prison in Cairo.

On Monday, the Prisoner Affairs specialist of the Palestinian Authority, and former prisoner, Abdul Nasir Farawneh reported that Israel uses Palestinian prisoners to test the effects of different drugs, through the experimental medicine. 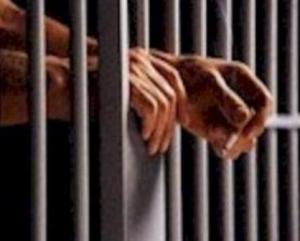 Through a statement from Algeria, Farawneh echoed the recent report “Palestinian Prisoners and Israeli Medical Experimentation: More than 5,000 Experiments Run Annually,” that was published by the Algeria Forum.

According to Farawneh, the Israeli Ministry of Health has increased its annual contribution to the experimental medicine by 15% since this practice was approved by the Knesset in 1997 and, in his opinion, this type of medicine is mostly practiced in jails.

“Steadily, more prisoners are being exposed to these treatments, increasing the number of sick prisoners in Israeli occupation prisons and emerging new and strange diseases.”

He also gave the example of the approximately 3,000 Palestinian prisoners in the Nafaha, Raymond, and Negev jails, 45% of the total, are subjected to group drug testing. Furthermore, prisoners in the Negev jails, who are exposed to harmful toxins as a result of the nearby Dimona nuclear reactor. END_OF_DOCUMENT_TOKEN_TO_BE_REPLACED