By George Monbiot, published in the Guardian | 18th June 2013 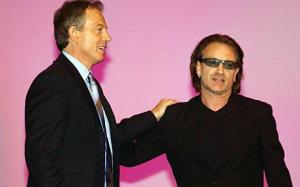 It was bad enough in 2005. Then, at the G8 summit in Scotland, Bono and Bob Geldof heaped praise on Tony Blair and George Bush, who were still mired in the butchery they had initiated in Iraq(1,2,3). At one point Geldof appeared, literally and figuratively, to be sitting in Tony Blair’s lap. African activists accused them of drowning out a campaign for global justice with a campaign for charity.

But this is worse. As the UK chairs the G8 summit again, a campaign that Bono founded, with which Geldof works closely(4), appears to be whitewashing the G8’s policies in Africa.

Last week I drew attention to the New Alliance for Food Security and Nutrition, launched in the US when it chaired the G8 meeting last year(5). The alliance is pushing African countries into agreements which allow foreign companies to grab their land, patent their seeds and monopolise their food markets. Ignoring the voices of their own people, six African governments have struck deals with companies such as Monsanto, Cargill, Dupont, Syngenta, Nestlé and Unilever, in return for promises of aid by the UK and other G8 nations.

A wide range of activists, both African and European, is furious about the New Alliance(6). But the ONE campaign, co-founded by Bono, stepped up to defend it(7). The article it wrote last week was remarkable in several respects: in its elision of the interests of African leaders and those of their people, in its exaggeration of the role of small African companies, but above all in failing even to mention the injustice at the heart of the New Alliance – its promotion of a new wave of land grabbing. My curiosity was piqued. END_OF_DOCUMENT_TOKEN_TO_BE_REPLACED

[Ex-US President Jimmy Carter, who has provided the stamps-of-approval on many “nation-building” elections and electoral stability–(conditions for foreign investors and for diplomatic “aid” in many countries)–is now playing an even more open role in constructing a “post-People’s War” orthodoxy in Nepal, walling off non-compliant revolutionary people from the new power arrangements.  Frontlines ed.]

KATHMANDU, APR 01 – Former US president Jimmy Carter on Monday said there is general political consensus that Constituent Assembly (CA) elections are not possible in June.
Carter, who is here on a four-day visit, made the statement after holding talks with President Ram Baran Yadav, Chairman of the Interim Election Government Khil Raj Regmi, top leaders of the major parties and Election Commission officials. With election-related preparations yet to be complete, Carter said the polling date is likely to be set for November.
“I think there is general consensus, which I share, that June election will not be possible at this point,” Carter told a press conference here. “My guess, as a foreigner who is here for three-four days, is that elections will be scheduled for after the monsoon season. The third week of November would be a possible time.”
The 88-year old leader pledged that his organisation, the Carter Center, would monitor the elections, while he vowed to visit Nepal to observe the polls. Carter visited Kathmandu in April 2008 to observe the first CA elections and was recently criticised by leaders from the Nepali Congress and the CPN-UML for endorsing the election as “free and fair” on the very day of polling, without making a critical assessment. Responding to the criticism, Carter said that Carter Center staff are stationed in countries months before elections to conduct ‘real’ observations. “There was certainly some intimidation by the Maoists and others, which we acknowledged in our report,” he said. “But, in general, my view was that the election adequately represented the will of the Nepali people. It was not perfect but in my judgment it was honest and fair enough to say that it was a successful election.” END_OF_DOCUMENT_TOKEN_TO_BE_REPLACED

That result was hailed as a success by the 100 heads of state who attended. Given how environmental summits have failed in recent years as global economic turmoil squashes political will to take on climate and conservation issues, the mere fact of agreeing to talk again in the future constitutes victory. END_OF_DOCUMENT_TOKEN_TO_BE_REPLACED

Hush Money For HRW? George Soros And The $100 Million “Gift”

George Soros is a shrewd, ruthless, billionaire Western businessman. Heavy hitters like him just do not give away large sums of money, in this case, $100 million to Human Rights Watch, out of the goodness of their hearts.

In some circles George Soros is considered to be a financial terrorist, who counts among his latest victims the PIGS family, as in Portugal, Italy, Greece and Spain. In the shadowy world of 21st Century finance, George Soros and his ilk can bring nations such as the PIGS to the brink of collapse, with their populations seeing their jobs, pensions and medical care disappearing into the offshore accounts of Soros and his fellow money mongers. This, of course, is nothing new, for Soros has been destabilizing and carrying out regime change for decades going back to his financial attacks on the Malaysian government for having the temerity, for amongst other things, to criticize Israel.

Far more sinister than the financial terror wreaked upon the world by Soros is the political havoc that he has caused under the guise of “democratic elections”. B,R or S its called, buy, rig or steal, George Soros has done it all. Under the code names of the “Orange Revolution”, the “Rose Revolution” and just plain “Unnoticed Revolutions” a long series of electoral coup d’etats have been carried out with the financial support of George Soros, all too often in close cooperation with the CIA. END_OF_DOCUMENT_TOKEN_TO_BE_REPLACED

[Bill Gates, founder of Microsoft which has made him among the wealthiest people in the world, has promoted through the Gates Foundation the image that Gates is a force for progress, a corporate figure with a conscience, involved only in socially-conscious projects.  This article will enable readers to compare that mythology with the facts about the agricultural programs it supports.–ed.] 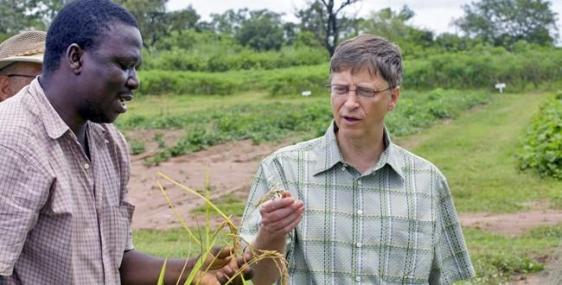 Farmers and civil society organisations around the world are outraged by the recent discovery of further connections between the Bill and Melinda Gates Foundation and agribusiness titan Monsanto. In August, a financial website published the Gates Foundation’s investment portfolio, including 500,000 shares of Monsanto stock with an estimated worth of $23.1 million purchased in the second quarter of 2010 (see the filing with the Securities and Exchange Commission). This marks a substantial increase from its previous holdings, valued at just over US$360,000 (see the Foundation’s 2008 990 Form).

‘The foundation’s direct investment in Monsanto is problematic on two primary levels,’ said Dr Phil Bereano, University of Washington Professor Emeritus and recognised expert on genetic engineering. ‘First, Monsanto has a history of blatant disregard for the interests and well-being of small farmers around the world, as well as an appalling environmental track record. The strong connections to Monsanto cast serious doubt on the foundation’s heavy funding of agricultural development in Africa and purported goal of alleviating poverty and hunger among small-scale farmers. Second, this investment represents an enormous conflict of interests.’ END_OF_DOCUMENT_TOKEN_TO_BE_REPLACED

How NGOs are planned and structured: NGOs are carefully managed and funded for the purpose of social control, with no room for democratic accountability to the people they claim to serve.

“Western NGOs skilfully exploit the unpopularity of corrupt regimes in order to further the foreign policy objectives of their own governments. Since foreign NGOs have the money to implement vital projects, many local NGOs which are sincere in improving the conditions in their own countries become vulnerable to manipulation by receiving grants from outsiders. Lack of funding forces local NGOs in the developing world to surrender their integrity and lose their identity as truly non-governmental bodies since they become the extended arm of foreign governments.” Non-governmental organizations (NGOs) have become an important political tool in the hands of the West. Like the word “aid”, the NGOs (they also use the alias non-profit organizations) are used to penetrate and undermine other societies, especially in the Muslim world. Looked at superficially, the concept of NGOs may appear practical and beneficial, but the manner in which they are used by the US and the West in general is not only a distortion of their original aim but borders on the scandalous. END_OF_DOCUMENT_TOKEN_TO_BE_REPLACED