[As the capitalist crisis — the so-called “Great Recession” — continues to shake up lives and property relations, real estate corporations are reorganizing housing markets to take advantage of mass desperation and this now also affects the funeral and cemetary markets.  For a diabolical view of how capitalist cost-benefit analysis anticipates death rates–soaring from suicides, but traffic deaths declining because people cannot afford car repairs or gas–and how science ends up with a body glut–see this article. — Frontlines ed.] 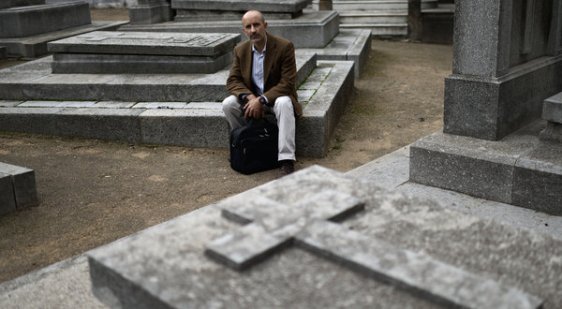 Fausto Ruiz wants to sell his family plots at the Montjuïc cemetery, where mausoleums, niches and graves can cost €100,000 or more.

BARCELONA — María Cristina Riveros can barely afford to live, let alone die. So when the end comes, she insists, there will be no spray of red roses or marble tombstone to mark her grave. Instead she is donating her body to science, to avoid being a financial burden on her family.

“I’m not upset about death — I’m upset about life,” said Mrs. Riveros, 53, an unemployed geriatric nurse and single mother, as she waited in line on a recent day for food at a church here. Her 16-year-old daughter, who suffers from a rare immune deficiency, needs €9,000, or about $11,500, for an operation, she said. Monthly insurance payments for her own funeral were out of the question.

Europe’s grinding economic crisis has left hard-hit Spaniards scrimping on death. They are defaulting on cemetery plots — and thousands face being evicted from them. They are opting for inexpensive funerals, or financing them in monthly installments. Pricey extras like grief therapy, organists to play “Ave Maria” or elaborate floral arrangements are being pruned.

But while austerity tears at the funeral industry — and some say the social fabric of the country — it has been a boon for science. Donating a body has become such a popular alternative to the cost of a funeral that some medical schools complain they do not have enough refrigerators to store all of them. END_OF_DOCUMENT_TOKEN_TO_BE_REPLACED

Millions of workers have been taking part in the dozens of co-ordinated protests in a so-called European Day of Action and Solidarity against spending cuts and tax hikes. END_OF_DOCUMENT_TOKEN_TO_BE_REPLACED 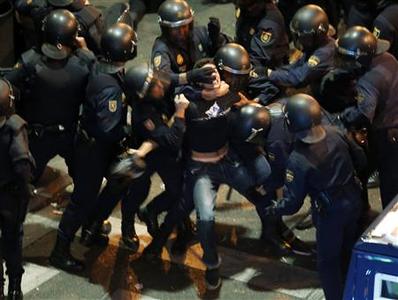 “My annual salary has dropped by 8,000 euros and if it falls much further I won’t be able to make ends meet,” said Luis Rodriguez, 36, a firefighter who joined the protest. He said he was considering leaving Spain to find a better quality of life. END_OF_DOCUMENT_TOKEN_TO_BE_REPLACED

MADRID — Spanish police have arrested seven left-wing union activists for their alleged role in a “Robin Hood”-style looting of a supermarket made to highlight the plight of people suffering through the country’s recession.A handful of activists from the southern Andalusian Workers’ Union made off with nine trolleys full of food from the supermarket in the southern town of Ecija and left without paying on Tuesday. They later gave the food to poor, unemployed people.
The mayor of the nearby town of Marinaleda, Juan Manuel Sanchez Gordillo, has admitted taking part in the heist, the latest in a string of controversial initiatives he has undertaken since taking office in 1979.

Sanchez Gordillo has boasted that his town has full employment thanks to the farm cooperatives his office has established for the jobless.

Police said one person was arrested during an eviction Friday of union members who were squatting on Defense Ministry land near Ecija that is lying fallow to demand it be given to hard-pressed farmers.

Four others were arrested elsewhere Friday, and two Thursday, although all but two have been released on bail pending legal action.

July 09, 2012 via Associated Press
Spanish miners in the northwestern provinces of Asturias and Leon, armed with homemade rockets and slingshots, have been battling police in protest against government cuts, including a slashing of subsidies in their industry.

Striking Spanish Miners Fire Homemade Rockets at Police
June 15, 2012 via Telegraph.co.uk
Striking Spanish coal workers continued to block roads and clashed  with police inside a mine in the northern region of Asturias on Friday.

At least 100,000 Spaniards angered by grim economic prospects and the political handling of the international financial crisis have turned out for street demonstrations in the country’s cities, marking the one-year anniversary of a movement that inspired similar pressure groups in other countries.

Tens of thousands of protesters in Madrid flooded into the central Puerta del Sol plaza in the evening and aimed to stay for three days. But authorities warned they wouldn’t allow anyone to camp out overnight, and up to 2000 riot police were expected to be on duty.

“I’m here to defend the rights that we’re losing and for the young people who have it so tough,” 57-year-old middle school teacher Roberto Alonso said. “They’re better educated than ever. But they don’t have work. They don’t have anything. They’re behind and they’ll stay that way.”

At least 20,000 people demonstrated in Barcelona. Marches were also held in Bilbao, Malaga and Seville. Sympathisers held protests in other European cities. END_OF_DOCUMENT_TOKEN_TO_BE_REPLACED 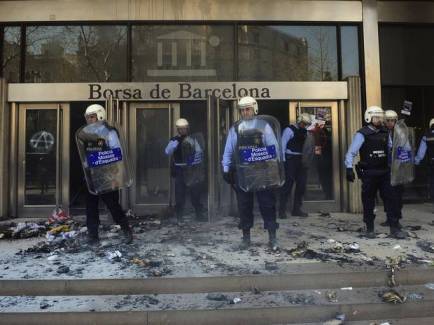 by Alasdair Fotheringham, The Independent (UK)

Approximately a quarter of a million protesters took to the streets in Barcelona, with some fringe groups attacking police vans and smashing shop windows until late into the evening. In contrast Madrid’s almost equally large demonstration, where the crowds of chanting, whistling protestors filled the emblematic Puerto del Sol square and surrounding streets to bursting point, was reported as being totally peaceful.

“There’s lots of people here, but we need even more, this country is going through an awful situation and its going to get worse,” young protester Luis Ferrer, on the dole for three months, told The Independent in Madrid’s demonstration.

“If we don’t make ourselves heard now, we never will. I don’t think we’re going to end up like Greece, but they’re using this recession to take away our rights as workers.It’s just an excuse.”

“The labour reforms they want to bring in are terrible and our wages are awful,” Jose, a protestor in his twenties, added. “They want us to work more and more, put up taxes too and that’s just not on.” END_OF_DOCUMENT_TOKEN_TO_BE_REPLACED

[Some are calling it the emergence of a Tahrir Square in Spain.  —  Frontlines ed.]