[Each day brings news of the every-sharpening contention between imperialist powers, who have long cooperated but are now more-ready to seize advantage at the expense of each other, and place burdens of more aggressive exploitation and more oppressive conditions on working people inside the imperialist countries (from US/EU to Chinese/Russian and others scrambling to expand their profits at each others expense).  One day, it is the seizure of energy resources, then it is trade routes and shipping, then monetary dominance, then credit dominance and wars, then military eyeball face-offs and surrogate/proxy hotspots, then it is digital battles and cyber wars.  There is no stopping this contention, nor any way for the people to see it but to raise the people’s struggles against all imperialism and all reaction.  Between these imperialists, working people have no horse in this race.  —  Frontlines ed.]

STRATEGIC rivalry between America and China takes many forms. Rarely does a clear winner emerge. An exception, however, is the tussle over China’s efforts to found a new Asian Infrastructure Investment Bank (AIIB). China has won, gaining the support of American allies not just in Asia but in Europe, and leaving America looking churlish and ineffectual. This month first Britain and then France, Germany and Italy said they hoped to join the bank as founding shareholders. China said other European countries such as Luxembourg and Switzerland are thinking of joining the queue.

Yet America has been sceptical about the AIIB. Its officials claim they have not “lobbied against” it, but merely stressed how important it is that it abide by international standards of transparency, creditworthiness, environmental sustainability, and so on.

END_OF_DOCUMENT_TOKEN_TO_BE_REPLACED

“No human is illegal”, thousands protest to close down detention center for migrants and refugees in Barcelona. via @Comite1desembre

It’s been almost a week since 20,000 police have started to hunt down poor migrants in Europe, and proof emerge that these raids are racist actions against refugees. Cops invade transportation means or other public place and always check everyone “who isn’t white”, as witnesses report.
Operation Mos Maiorum is indeed a public-funded police operation of stigmatization, racist discrimination, and criminalization of poor migrants. Activists all over Europe are resisting by informing migrants and refugees how to avoid raids, and how to alert others; see below.
Police and state terror against migrants has been again documented in Spain: @PRODEINORG has filmed police clubbing migrants who try to jump Meila border. It is not known how many migrants have been killed by police at this border, but previously proof of these crimes were made public without any stirring any action or response against the killer cops.
END_OF_DOCUMENT_TOKEN_TO_BE_REPLACED

Millions of workers have been taking part in the dozens of co-ordinated protests in a so-called European Day of Action and Solidarity against spending cuts and tax hikes. END_OF_DOCUMENT_TOKEN_TO_BE_REPLACED

[TIME magazine has detailed what amounts to a bourgeois confession about the class nature of the state.  Often wrapped in theatrical “democratic” disguise, the modern capitalist state is always the loyal servant of capitalism, and the enemy of the working class and the majority of society.  The reality of bourgeois rule is usually concealed behind populist rhetoric, selective privileges, corruption, xenophobia, and media deceptions which create an ongoing  culture of confusion.  But times of severe crisis rip this veil and expose the reality, as seen this week in the events in Greece and Italy. — Frontlines ed.]

Regime Change in Europe: Do Greece and Italy Amount to a Bankers’ Coup?

The voice of the people isn’t something the markets seem to want to hear these days. First there was Greece, the cradle of democracy itself, where early this month, the merest mention of a referendum offering its citizens a say in a series of severe austerity measures was enough to send the markets into a tailspin. The ultimate result: the collapse of Prime Minister George Papandreou’s ruling coalition, the rejection of any notion of bringing the proposal before the people, and the installation of a caretaker government under the leadership of Lucas Papademos, a former vice president of the European Central Bank and, until earlier this week, a visiting professor at Harvard.

Then came Italy. As Athens threatened to go under, Rome found itself under pressure not so much for its level of debt — which though high is generally considered within the limits of sustainability — as much as for the erratic behavior of its flamboyant prime minister, Silvio Berlusconi. On Monday, investors seemed to make the collective decision that he could no longer be trusted at the helm of the euro zone’s third largest economy and sent Italy’s cost of borrowing up towards crisis levels. By the end of the week, not only was Berlusconi finished, so was the very idea of holding a vote to replace him. The markets had spoken, and they didn’t like the idea of going to the electorate. “The country needs reforms, not elections,” said Herman Van Rompuy, president of the European Council on a visit to Rome Friday.

Indeed both Papandreou and Berlusconi had been respectively berated and belittled by Angela Merkel of Germany and Nicolas Sarkozy of France. It is almost as if Franco-German displeasure combined with the disapproval of the markets was enough to bring about regime-change. As in Athens, the plan in Rome is to replace the outgoing prime minister with somebody from outside the political class. Mario Monti, a neo-liberal economist and former EU commissioner who seems designed with the idea of calming the markets in mind, is expected to take over from Berlusconi after he resigns Saturday. For many in the two battle-scarred capitals, the fact that Papademos and Monti aren’t directly accountable to the public isn’t a problem. It’s the reason they’re being called in. END_OF_DOCUMENT_TOKEN_TO_BE_REPLACED

[In the midst of the worst economic crisis since World War 2, the arrogance of power is shaken as, in many countries, oligarchs and dictators and billionaires are forced to exit the centers of power in growing disgrace.  Today, the people poured into the streets in Italy today to celebrate the departure of the hated Berlusconi.  We will see what struggles the people will be able to bring against the chokehold of capitalism in the months ahead… — Frontlines ed.]

ROME (Reuters) – Thousands gathered in Rome to celebrate the political demise of Silvio Berlusconi on Saturday, whistling and shouting insults as the 75-year-old media magnate drove to hand in his resignation as prime minister.

In an atmosphere reminiscent of a football World Cup victory celebration, squares outside government buildings were packed with cheering crowds, singing and chanting as the curtain came down on Berlusconi’s scandal-hit government.

Police held back the crowds behind barriers outside Berlusconi’s private residence in central Rome and in front of the Quirinale Palace, the residence of the head of state, President Giorgio Napolitano.

A small orchestra played the Hallelujah chorus from Handel’s Messiah as the crowd waited for Berlusconi to appear and hand in his resignation. END_OF_DOCUMENT_TOKEN_TO_BE_REPLACED

[This Chinese move seems motivated by a search for profitable investments and the opportunity to step across the threshold of Europe.  When the Greek financial crisis exploded a few months ago, and Germany, the UK, and the US all resisted bailing out the bankrupt regime, the Chinese smelled an opportunity to go where they could not go before.–Frontlines ed.] 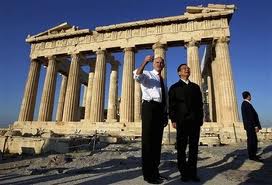 PARIS — When Prime Minister Wen Jiabao of China visited Athens last month, he came bearing gifts: billions of dollars worth of business deals and a wave of favorable attention from a crucial foreign investor.

“The support of our Chinese friends is fortunate for us,” Greece’s minister of state, Haris Pamboukis, said by telephone. But China has much greater ambitions. Greece is one foothold for China’s broad, strategic push into Europe. It is snapping up assets depressed by the global financial crisis and becoming a significant partner of other hard-hit European nations.

That message will be reinforced by a visit this week by China’s president, Hu Jintao, who is scheduled to meet with top officials and business executives of Portugal and France.

Ultimately, analysts say, Beijing hopes to achieve not just more business for its own companies, but also greater influence over the economic policies set in the power corridors of Brussels and Germany.

“They are indicating a willingness to stick their nose into Europe’s business,” said Carl B. Weinberg, chief United States economist of High Frequency Economics. “It’s very clever and sends a clear message,” he added, “that China is a force to be contended with.”

END_OF_DOCUMENT_TOKEN_TO_BE_REPLACED

Police block Demonstrators of the FIOM metalworkers' union during a protest

Thousands of Italians marched in Rome on Saturday in a rally backed by Italy’s largest union to protest the bleak outlook for jobs and demand more rights for workers.  Despite a warning from the interior minister this week that anarchist and extremist groups could infiltrate the rally to create disturbances, the rally proceeded without violence.

“The crisis has reached a certain point but is definitely not over yet,” said Eugenio Borrello of the FIOM metalworkers union that organized the protest. “Unfortunately, in Italy only the workers and pensioners are paying for the crisis, the government is doing absolutely nothing.”

FIOM, a hardline faction of Italy’s biggest union CGIL, has been locked in a bitter battle with Fiat over the carmaker’s efforts to reform labour practices at its plants and boost efficiency.  Three workers at a Fiat plant in Italy’s south who sparked a fierce controversy when they were fired in July on accusations of blocking machinery during a strike were among those who marched in the protest.

Waving red flags and banners, protesters marched through central Rome as police looked on. Prominent centrist and leftist opposition leaders were among those who took part.  Italians have taken to the streets several times in recent months to protest the dwindling number of jobs and spending cuts on areas like education as the country recovers only slowly from its worst recession since World War Two. END_OF_DOCUMENT_TOKEN_TO_BE_REPLACED