The situation in Greece

The situation in Greece is critical both for the people and the working class. Because of the imperialist dependence of the country, its position in the EU and the Eurozone, its military-political dependence in NATO and its military-political role as a NATO-US springboard, the social and political developments in Greece cannot be seen apart from the developments in SE Mediterranean, the M. East., N. Africa, the Balkans and the quarrels inside the EU.

All contradictions and geo-political aims of the imperialist powers in the region, along with the special but critical issue of the future of the EU, are influencing all developments in our country, having in their background the world crisis. That is the reason that Greece is in the first page of the Media something that is proportionately greater than that of other countries similar to Greece (Portugal, Ireland).

The troika mechanism and its real targets

Starting after the October 2009 elections and the troika (IMF-EU-ECB) “salvation mechanism” of May 2010 there is in motion a rapidly escalating antipopular and antilabor policy that flattens all economic-labor-social rights of the people. The imperialist powers of the EU, mainly Germany and France, aided by the strong presence of the US through the IMF, and with the pretext of the great foreign debt imposed a deeper subjugation that takes the form of a protectorate.

This mechanism gives shark loans in 3-month installments in order to pay back a portion of the huge interests. This leads to greater debt. (In 2009 the debt was 120% of GDP and now approaches 160%). But the greatest imperialist profit is not the huge amounts of money that accumulate through this loan shark imposition. The main return that they take from the country is its total destruction of any productive base, the imposition of a medieval regime as far as the labor, social, economic and political rights of the people are concerned, and the sell-out and plunder of every resource and infrastructure this country has. END_OF_DOCUMENT_TOKEN_TO_BE_REPLACED

Austerity And Fascism In Greece – The Real 1% Doctrine

The new Minister of Infrastructure, Makis "Hammer" Voridis in an earlier time

See the guy in the photo there, dangling an ax from his left hand? That’s Greece’s new “Minister of Infrastructure, Transport and Networks” Makis Voridis captured back in the 1980s, when he led a fascist student group called “Student Alternative” at the University of Athens law school. It’s 1985, and Minister Voridis, dressed like some Kajagoogoo Nazi, is caught on camera patrolling the campus with his fellow fascists, hunting for suspected leftist students to bash. Voridis was booted out of law school that year, and sued by Greece’s National Association of Students for taking part in violent attacks on non-fascist law students.

With all the propaganda we’ve been fed about Greece’s new “austerity” government being staffed by non-ideological “technocrats,” it may come as a surprise that fascists are now considered “technocrats” to the mainstream media and Western banking interests. Then again, history shows that fascists have always been favored by the 1-percenters to deliver the austerity medicine.

This rather disturbing definition of what counts as “non-ideological” or “technocratic” in 2011 is something most folks are trying hard to ignore, which might explain why there’s been almost nothing about how Greece’s new EU-imposed austerity government includes neo-Nazis from the LAOS Party (LAOS is the acronym for Greece’s fascist political party, not the Southeast Asian paradise).

Which brings me back to the new Minister of Infrastructure, Makis Voridis. Before he was an ax-wielding law student, Voridis led another fascist youth group that supported the jailed leader of Greece’s 1967 military coup. Greece has been down this fascism route before, all under the guise of saving the nation and complaints about alleged parliamentary weakness. In 1967, the military overthrew democracy, imposed a fascist junta, jailed and tortured suspected leftist dissidents, and ran the country into the ground until the junta was overthrown by popular protest in 1974. END_OF_DOCUMENT_TOKEN_TO_BE_REPLACED

16 November 2011, BBC–Greece is bracing for a large rally to mark the anniversary of the student uprising in 1973 that helped bring down the country’s military dictatorship.The march is expected to be joined by protesters against planned austerity measures, which Greece must implement to tackle its growing debt crisis.

Some 7,000 policemen are being deployed in Athens amid fears that the rally may turn violent.

It comes a day after Greece’s interim government won a confidence vote.

The governing coalition of Lucas Papademos had a huge majority – 255 MPs voted in favour, and 38 against.

The technocratic government must approve a new bailout package and commit to reforms in order to secure the next instalment of an international loan. END_OF_DOCUMENT_TOKEN_TO_BE_REPLACED

[In the midst of ever-growing crisis, national celebrations are widely seen as bourgeois extravagances undeserving of popular support. — Frontlines ed.]

The protest in Thessaloniki was echoed at smaller parades across Greece, including in Athens where marchers held black ribbons. It showed the extent of anger at the higher taxes and wage cuts sought by the European Union and the International Monetary Fund in return for funds to avert a debt default.

The annual military parade in the northern city is one of the most symbolic events in Greece’s political calendar and commemorates the rejection of Italy’s ultimatum to surrender in 1940. It was the first time it had been cancelled. END_OF_DOCUMENT_TOKEN_TO_BE_REPLACED

In a protest that started earlier this week, the occupation affected about 40 institutions by yesterday, on the eve of demonstrations planned for Athens and Salonika, the reports said.

Many of the students were affiliated to radical and communist movements.

Last week, the Greek Parliament backed a bill which aims to improve the operation of universities marred by chronic waste of state funds and nepotism.

It also seeks to end the practice of thousands of Greek families sending their children to study abroad every year instead of opting for domestic institutions which are regularly shut down by student occupations and protests.

The overhaul has been criticised by many academics and leftist political parties who say it puts undue emphasis on business-oriented degrees to the detriment of other academic disciplines less in demand by employers.

An attempt by the government to open university boards to outsiders such as business leaders has also proved controversial. 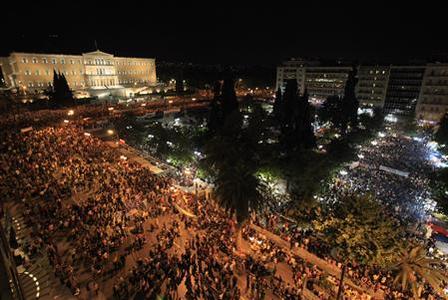 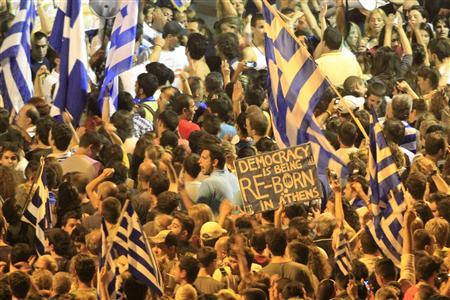 ATHENS (Reuters) – Greek Prime Minister George Papandreou starts a campaign on Monday to secure a new international bailout by imposing years of austerity on a nation already seething over corruption and economic mismanagement.

Unease is growing within Papandreou’s ranks about the consequences of waves of budget cuts demanded under successive deals with the European Union and IMF — and this could turn into alarm after at least 80,000 Greeks crammed a central Athens square to vent their anger over the nation’s dire state.

As the government struggles to prevent Greece from defaulting on its debt, the Socialist cabinet will discuss informally on Monday the medium-term economic plan which will impose 6.4 billion euros ($9.37 billion) of extra austerity this year alone.

This is just the first stage of a drive to turn the plan, agreed on Friday with the EU and IMF as the price of a new financial rescue, into law. END_OF_DOCUMENT_TOKEN_TO_BE_REPLACED

[The continuing–and deepening–of the worldwide crisis of the imperialist system continues to elude  management and control by the imperialist’s economic and political strategists and managers.  Their intelligentsia and their mass media continue to portray the crisis as one of failed policies–and not as a crisis of capitalism.  The Washington Post–a major “liberal” media operation in service of US hegemony–has turned attention, once again, to the situation in Greece, which continues to unravel in both economic and political terms.  Their “analysis” of the  root causes and growth factors of the Greek (and European) anarchist movements ends up with some insights, but conclusions no deeper than the “wag of the finger, tip of the hat” of comedic lore. — Frontlines ed.]

"Measures meant to shore up the country’s finances have sparked protests that go beyond the bounds of normal civil disobedience and reinvigorated the anarchist movement." (Washington Post caption)

Athens — Already struggling to avoid a debt default that could seal Greece’s fate as a financial pariah, this Mediterranean nation is also scrambling to contain another threat — a breakdown in the rule of law.

Thousands have joined an “I Won’t Pay” movement, refusing to cover highway tolls, bus fares, even fees at public hospitals. To block a landfill project, an entire town south of Athens has risen up against the government, burning earth-moving equipment and destroying part of a main access road.

The protests are an emblem of social discontent spreading across Europe in response to a new age of austerity. At a time when the United States is just beginning to consider deep spending cuts, countries such as Greece are coping with a fallout that has extended well beyond ordinary civil disobedience. END_OF_DOCUMENT_TOKEN_TO_BE_REPLACED

AlJazeeraEnglish | December 06, 2010
Police and demonstrators have clashed in the Greek capital, after thousands of people gathered to mark the anniversary of a police shooting.
The demonstration marks two years since police shot dead 15 year old Alexandros Grigoropoulos.
His death sparked weeks of rioting, the worst Greece had witnessed in several decades, bringing the capital to a standstill.
This October a police officer was jailed for life and another for ten years over the shooting.
As well as marches in Athens and the northern city of Thessaloniki, the Greek civil servants’ union’s also marked the anniversary, stopping work for three hours.

ATHENS: Thousands of people marched in Athens on Wednesday to commemorate a 1973 student revolt against a US-backed junta, but brandishing banners protesting the financial crisis gripping Greece.
Around 20,000 demonstrators took part in the annual march, police said, with a large turnout from student groups, workers and leftist party supporters.

“We paid for their profits, we will not pay for their crisis,” read one of many protest banners targeting capitalism. “Oppose austerity and submission,” said another.

People of all ages, from pensioners to toddlers accompanied by their parents, participated in the annual three-kilometre demonstration.

The protesters also shouted anti-American slogans as they marched on the US embassy, the traditional focal point of the annual protest. END_OF_DOCUMENT_TOKEN_TO_BE_REPLACED