MANILA – The Philippines and the United States on Wednesday opened talks on increased American military presence, amid protests by leftist groups warning against foreign interference.

Filipino activists hold up placards as they stage a lie-in before a police line during a protest against a meeting between Philippine and US officials in Manila on Wednesday. The protesters were opposing the talks over an increase in US military troops in the country. (AFP photo)

Activists picketed the principal military base in Manila, where the first round of negotiations on a “framework on increased rotational presence” was being held.

The demonstrators denounced the talks and called on the Philippine government not to give the US military more access to the country, which shut down American air and naval bases more than two decades ago. END_OF_DOCUMENT_TOKEN_TO_BE_REPLACED

[This press release puts forward Andres Bonifacio as a revolutionary role model for today’s Filipino youth. Bonifacio founded the Katipunan, which led the people’s struggle against Spanish colonialism and then the US military forces which invaded the Philippines in 1899. The US counter-insurgency war from 1899-1908 left over a million Filipinos dead. This war to suppress the Filipino people’s struggle for independence and national liberation was the direct precursor for US imperialism’s genocidal wars against the Vietnamese and Korean peoples a half century later.—Frontlines ed]

The NDFP-Mindanao calls upon Kabataang Makabayan (KM) and the Filipino Youth:

FULFILL AND CARRY FORWARD THE TASKS OF THE SECOND PROPAGANDA MOVEMENT TO ADVANCE THE NATIONAL DEMOCRATIC REVOLUTION!

The National Democratic Front of the Philippines – Mindanao salutes all the members as well as the heroes and martyrs of the Kabataang Makabayan (KM) on the occasion of its 46th founding anniversary.

KM student/youth contingent in a Manila protest against the repressive actions of the US-backed Marcos regime in the early 1970s. When Marcos declared martial law in 1972, the KM went underground and many of its members joined the Communist Party of the Philippines and the New People's Army's guerilla fronts.

Andres Bonifacio, one of the great revolutionary leaders, whose 101st birth date was chosen to be the founding date of KM, must have been proud to see the sons and daughters of the revolution today carrying onward with fervent and vigor the aspirations of the Filipino people to be free from the clutches of oppression and exploitation by foreign power and its local agents.

True to its goals and ideals, the KM, has performed and has continued to do so its historic role of being the vanguard organization of the Filipino youth. Since its founding in 1964, the patriotic Kabataang Makabayan took on their significant task of carrying forward the national-democratic propaganda movement to stimulate the positive revolutionary potential of their fellow youth and students, and, more importantly, to help in rousing the revolutionary might of the masses of workers and peasants. END_OF_DOCUMENT_TOKEN_TO_BE_REPLACED 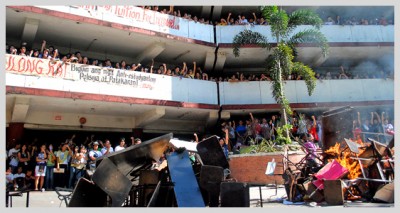 March 2010: Hundreds of students at Polytechnic University in Manila, the largest university in the Philippines, walked out of their classes to protest a proposed 2,000% tuition hike. They threw out dilapidated armchairs and desks from the balconies, piled them up in front of the main arts building and set them up in flames.

By the Communist Party of the Philippines ,27 November 2010

The CPP hails the militancy and determination of the students, teachers and other school personnel in the mass protest actions they have launched the past two weeks. The CPP takes note of the widespread unity of students, teachers, administrative officials, non-academic workers and supporters against the US-Aquino regime’s SUC budget cuts. The broad united front against the budget cuts underscores the popular opposition to the ruling regime’s policy to cut state subsidies for SUCs and other direly needed social services, and concentrate the bulk of state spending for foreign debt servicing, military spending, privatization programs, “pork barrels” and the World Bank’s Conditional Cash Transfer (CCT) program for perpetual mendicancy.

The participation of several thousand students, academic and non-academic school personnel and other sectors in campus walkouts and other protest actions the past several days significantly mark a rising tide of mass protests against the US-Aquino regime’s antipeople policies.

These rallies in Philippine universities and colleges are taking place at the same time as students wage protest actions in unprecedented numbers in the United Kingdom, Ireland, France, Italy, Spain, Portugal, some states in the U.S., and other countries where governments have carried out similar “austerity measures” resulting in brutal budget cuts in education and other necessary social spending. END_OF_DOCUMENT_TOKEN_TO_BE_REPLACED