[IRecent years have seen the insertion of imperialist forces and inter-imperialist hegemonic claims into every corner of the world, under the guise of “humanitarianism” or “disaster capitalism.”  The US has been most prominently displayed in this practice, having honed the method as a public doctrine after failing the “winning hearts and minds” test in the Vietnam war, and then doing medical rescues in the period of recovering from the so-called “Vietnam Syndrome” (ie, reversing the functional anger and opposition to imperialist wars).  In recent years, as the world imperialist system has become more crisis-ridden and internally contentious, other imperial powers have entered the “humanitarian imperialist” contest as well.  Today, the new “scramble for Africa” is focused on the struggle to rescue the Nigerian girls abducted by the diabolical and malevolent “Boko Haram” gang which grew in the vacuum of elite corruption and sectarian power, and mass poverty in Nigeria, which are the fruits of colonialism and neo-colonialism, and of a regime that cannot or will not keep Nigerian people out of harms way.  The US has drones from its nearby drone base in Niger, and some troops and “advisors” from AFRICOM; France has some forces on the ground, a legacy from the French colonial (and more recent neo-colonial) wars in neighboring countries; Britain has some surveillance planes; Israel has sent Special Forces commandos/shock troops, at Goodluck Jonathon’s invitation; and China, not one to be left out or to forget their massive recent Nigerian investments, has sent a PLA frigate, and given a new satellite to Nigeria to run their media and tele-communications and surveillance ops.  See the 4 articles below for more self-determination-breaking-news on these opportunist/imperialist relief efforts from the US, China, Israel.  —  Frontlines ed.] 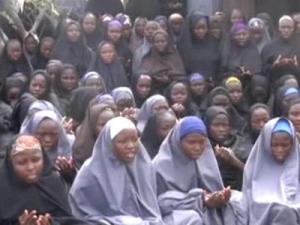 The “humanitarian” U.S. military occupation of Africa has been very successful, thus far. “The Chibok abductions have served the same U.S. foreign policy purposes as Joseph Kony sightings in central Africa.” Imagine: the superpower that financed the genocide of six million in Congo, claims to be a defender of teenage girls and human rights on the continent. If you believe that, then you are probably a member of the Congressional Black Caucus.

“The Boko Haram, like other jihadists, had become more dangerous in a post-Gaddafi Africa – thus justifying a larger military presence for the Americans.”A chorus of outraged public opinion demands that the “international community” and the Nigerian military “Do something!” about the abduction by Boko Haram of 280 teenage girls. It is difficult to fault the average U.S. consumer of packaged “news” products for knowing next to nothing about what the Nigerian army has actually been “doing” to suppress the Muslim fundamentalist rebels since, as senior columnist Margaret Kimberley [14] pointed out in these pages, last week, the three U.S. broadcast networks carried “not a single television news story about Boko Haram” in all of 2013. (Nor did the misinformation corporations provide a nanosecond of coverage of the bloodshed in the Central African Republic, where thousands died and a million were made homeless by communal fighting over the past year.) But, that doesn’t mean the Nigerian army hasn’t been bombing, strafing, and indiscriminately slaughtering thousands of, mainly, young men in the country’s mostly Muslim north. END_OF_DOCUMENT_TOKEN_TO_BE_REPLACED

Police shot and killed at least one student of the University of Uyo Wednesday as a demonstration by students over insufficient lecture venues and campus transit buses transportation system turned violent, witnesses said.

Some residents of the area said three students may have died after police fired live ammunitions into a crowd of protesting students. But the witnesses said they were certain of one casualty. Police authorities in Uyo could not be immediately reached for comments.

A school spokesperson, Godfrey Essien, said he was on leave and was piecing details of what actually happened.

Residents say the students, mainly of Science and Engineering faculties, went on rampage for several hours on Wednesday in protest of poor transportation system for students after authorities ordered the relocation of the Science faculty from the school’s temporary site along Ikpa Road to the permanent site at Nsukara Offot.

The new site lacks enough infrastructures to accommodate the relocating Science students, and the Engineering students who had moved in earlier, leading to frequent confrontations.

The Engineering students are said to occasionally bar the Science students from using the limited lecture rooms and school shuttles between the old and new campuses, about 10 kilometers apart.

The transfer of the Science students merely compounded the hardship already faced by students on the permanent site, situated along the road leading to the city’s new airport.

The tipping point for the students, according to residents, came after the Science students were ordered to pay N200 per day to use the campus shuttle buses, against the N1, 000 paid per semester by the Engineering students for the same service. END_OF_DOCUMENT_TOKEN_TO_BE_REPLACED

Awka — The Movement for the Actualization of Sovereign State of Biafra (MASSOB) yesterday gave the Army a 48-hour ultimatum to release the corpses of three of its members allegedly killed on Sunday by soldiers from the Onitsha Military Cantonment, and 46 of its members arrested by the soldiers. Comrade Uchenna Madu, the MASSOB Director of Information at a news conference in Onitsha yesterday stated that the Army has provoked MASSOB by illegal killings and detention.

“If the issue is not addressed, the Army and the Nigerian state will see the violent side of MASSOB,” he said.

Madu lamented that the non-violent posture of MASSOB has been mistaken for weakness and cowardice by security operatives, “who now derive joy in the killing and intimidation of unarmed MASSOB members”. END_OF_DOCUMENT_TOKEN_TO_BE_REPLACED