The Brazilian government and private sector are collaborating with Japan to push a large-scale agribusiness project in Northern Mozambique. The project, called ProSavana, will make 14 million hectares of land available to Brazilian agribusiness companies for the production of soybeans, maize and other commodity crops that will be exported by Japanese multinationals. This area of Mozambique, known as the Nacala Corridor, is home to millions of farming families who are at risk of losing their lands in the process.

The Nacala Corridor stretches along a rail line that runs from the port of Nacala, in Nampula Province, into the two northern districts of Zambézia Province and ends in Lichinga, in Niassa Province. It is the most densely populated region of the country. With its fertile soils and its consistent and generous rainfall, millions of small farmers work these lands to produce food for their families and for local and regional markets.

But now ProSavana proposes to make these same lands available to Japanese and Brazilian companies to establish large industrial farms and produce low cost commodity crops for export. Through ProSavana, they intend to transform the Nacala Corridor into an African version of the Brazilian cerrado, where savannah lands were converted to vast soybean and sugar cane plantations.

Large numbers of Brazilian investors have already been surveying lands in northern Mozambique under the ProSavana project. They are being offered massive areas of land on a long-term lease basis for about US$1/ha per year.

GV Agro, a subsidiary of Brazil’s Fundação Getulio Vargas directed by the former minister of agriculture, Roberto Rodriguez, is coordinating the Brazilian investors.

Charles Hefner of GV Agro dismisses the idea that the project will displace Mozambican peasants. He says ProSavana is targeting “abandoned areas” where “there is no agriculture being practiced”.

“Mozambique has a tremendous area available for agriculture,” says Hefner.  “There is room for mega projects of 30-40,000 ha without major social impacts.”

But land surveys by Mozambique’s national research institute clearly show that nearly all the agricultural land in the area is being used by local communities.

“It is not true that there is abandoned land in the Nacala Corridor,” says Jacinto Mafalacusser, a researcher at the Instituto de Investigação Agrária de Moçambique (IIAM). END_OF_DOCUMENT_TOKEN_TO_BE_REPLACED

Africa has been witnessing an influx of Chinese investors and labourers

Beijing has even gone an extra mile by opting for the softer approach of “not interfering in the continent’s political affairs” to justify its economic pursuits in Africa. But the Chinese stand accused of not being any better than Africa’s former colonial masters when it comes to their labour practices.

Late last week, Chinese mine managers shot and wounded 11 of their employees in southern Zambia over a pay dispute, sparking a countrywide outrage in the southern African nation.

And this is not just the first incident in the country. A few months ago, local workers at a Chinese-owned copper mine went on strike demanding better working conditions. The strike turned into a riot with reports of a Chinese manager firing at the crowd and injuring people.

A year ago in Mozambique, an argument broke out between a provincial governor, Mr Mauricio Vieira and the China Henan International Cooperation Group (CHICO). After winning a contract to build a new water supply system to service the capital Maputo and other surrounding towns, the firm had barely began work than complaints from local workers about poor treatment at the hands of the Chinese bosses surfaced. END_OF_DOCUMENT_TOKEN_TO_BE_REPLACED 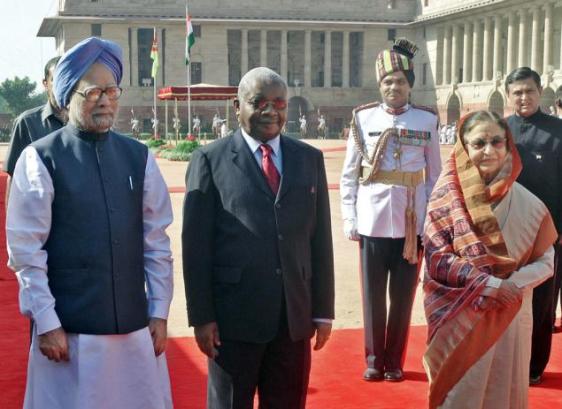 Maputo — Indian Prime Minister Manmohan Singh on Thursday announced a line of credit for Mozambique of 500 million US dollars, intended to finance projects in infrastructures, agriculture and energy.

Singh made the announcement in New Delhi after official talks with a Mozambican delegation headed by President Armando Guebuza, who is on a five day state visit to India.

Singh also announced that the two countries have set a target of a billion dollars a year for their trade, to be reached within the next three years.

He was speaking after he and Guebuza had witnessed the signing, by Mozambican and Indian ministers, of an agreement on ending double taxation and preventing tax evasion, and memoranda of understanding on mineral resources, and on cooperation in promoting micro, small and medium enterprises. END_OF_DOCUMENT_TOKEN_TO_BE_REPLACED

Planning Minister Aiuba Cuereneia told reporters after a Cabinet meeting Tuesday that the 20 percent increase in the price of bread that went into effect Monday would be reversed.

He also says the government is suspending salary increases for top government officials.

Protests last week in the capital, Maputo, turned violent, with demonstrators clashing with police. The health department says the death toll was 13.

Mozambique’s government has said that keeping food prices low is difficult because so much of the country’s food has to be imported. The southeastern African nation grows only 30 percent of the wheat it needs.

Violent protests over high food prices in Mozambique have left at least 10 people dead and more than 440 people wounded. In the latest clashes, which began on Wednesday, three police officers were injured in fighting with demonstrators in Maputo, the capital, on Friday evening.  Police have used rubber bullets and tear gas against protesters but no incidents were reported overnight and the situation was said to be quiet on Saturday.

“The situation at this point is apparently quite calm,” Fernando Lima, the publisher of the country’s weekly newspaper Savana, told Al Jazeera. “You cannot find signs of violence, aside from stores that have been looted.”

Speaking on Saturday, Americo Ubisse, a Red Cross spokesman in Maputo, said: “We have no incidents reported since yesterday. Everything is fine, the situation is still under control.” The organisation, which has been monitoring the demonstrations, also said Chomoio, in the centre of the country, was quiet, following fresh skirmishes on Friday night.

Thousands of people have been angered by a 30 per cent increase in the price of bread and higher electricity and water tariffs. END_OF_DOCUMENT_TOKEN_TO_BE_REPLACED