The Stealth Expansion of a Secret U.S. Drone Base in Africa

VIEWED FROM HIGH ABOVE, Chabelley Airfield is little more than a gray smudge in a tan wasteland. Drop lower and its incongruous features start coming into focus. In the sun-bleached badlands of the tiny impoverished nation of Djibouti — where unemployment hovers at a staggering 60 percent and the per capita gross domestic product is about $3,100 — sits a hive of high-priced, high-tech American hardware.

Satellite imagery tells part of the story. A few years ago, this isolated spot resembled little more than an orphaned strip of tarmac sitting in the middle of this desolate desert. Look closely today, however, and you’ll notice what seems to be a collection of tan clamshell hangars, satellite dishes, and distinctive, thin, gunmetal gray forms — robot planes with wide wingspans.

Unbeknownst to most Americans and without any apparent public announcement, the U.S. has recently taken steps to transform this tiny, out-of-the-way outpost into an “enduring” base, a key hub for its secret war, run by the U.S. military’s Joint Special Operations Command (JSOC), in Africa and the Middle East. The military is tight-lipped about Chabelley, failing to mention its existence in its public list of overseas bases and refusing even to acknowledge questions about it — let alone offer answers. Official documents, satellite imagery, and expert opinion indicate, however, that Chabelley is now essential to secret drone operations throughout the region.

“This base is now very important because it’s a major hub for most drone operations in northwest Africa,” he said. “It’s vital. … We can’t afford to lose it.” 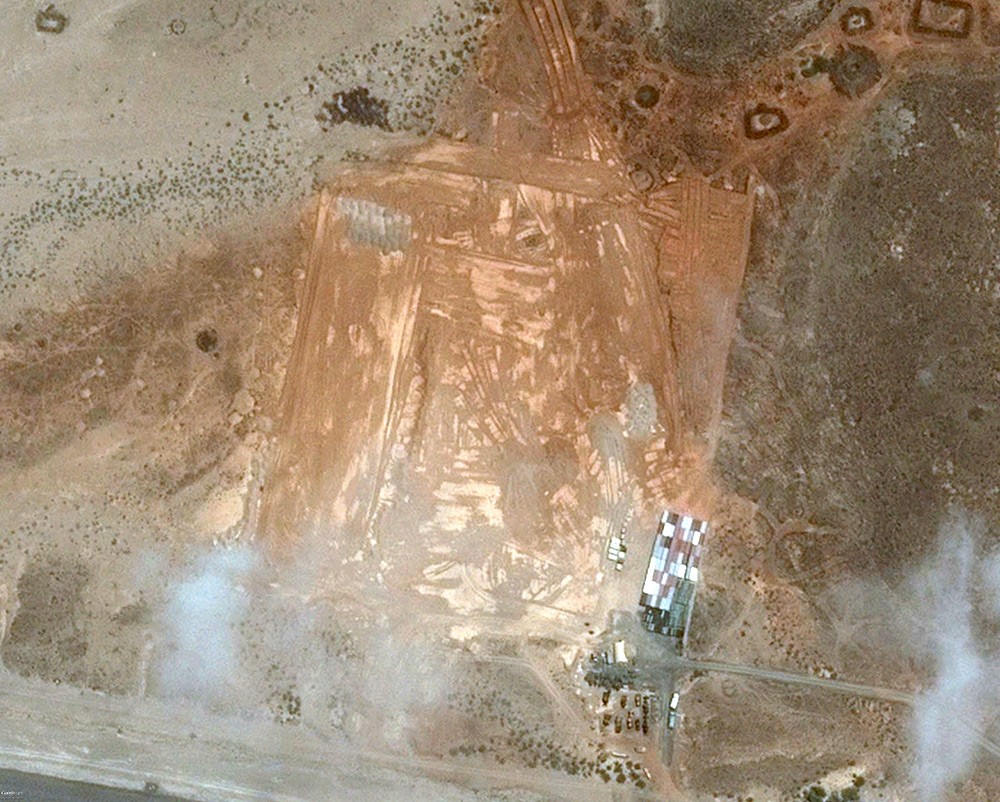 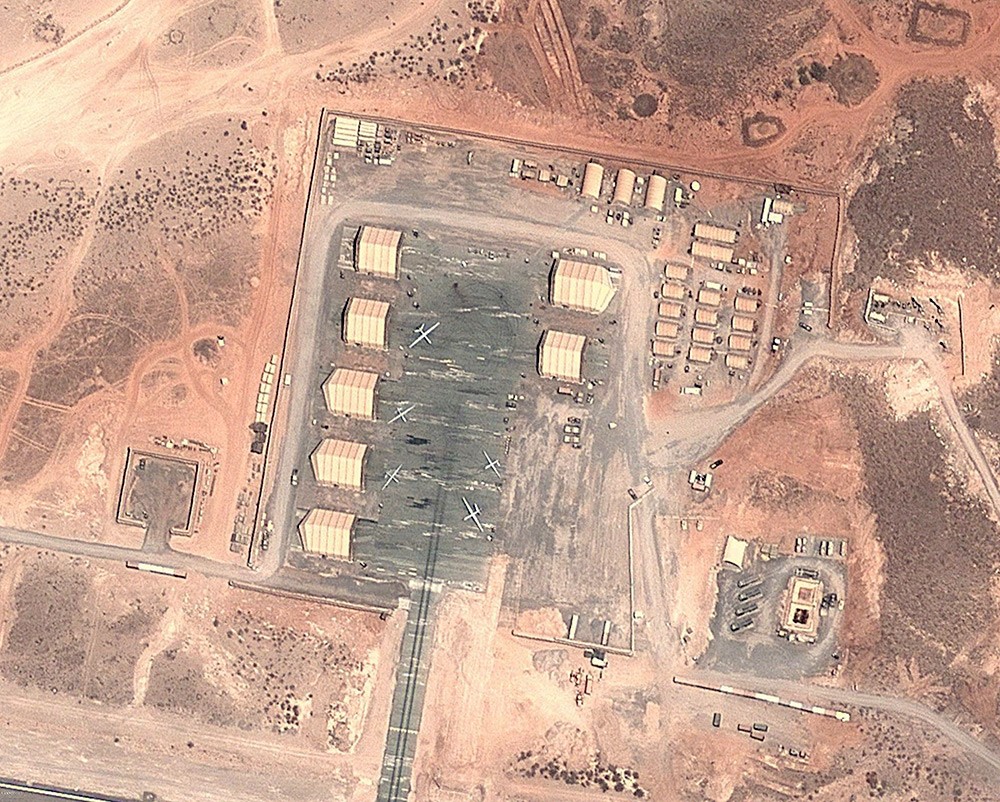 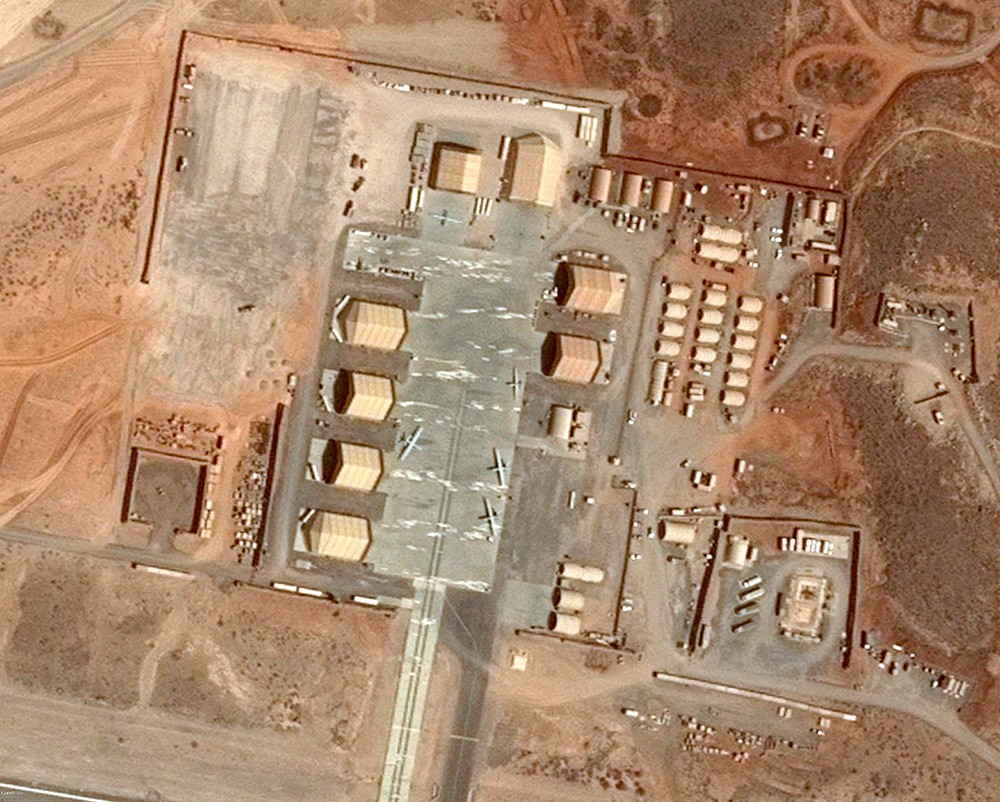 The startling transformation of this little-known garrison in this little-known country is in line with U.S. military activity in Africa where, largely under the radar, the number of missions, special operations deployments, and outposts has grown rapidly and with little outside scrutiny.

The expansion of Chabelley and its consequent rise in importance to the U.S. military began in 2013, when the Pentagon moved its fleet of remotely piloted aircraft from its lone acknowledged “major military facility” in Africa — Camp Lemonnier, in Djibouti’s capital, which shares the country’s name — to this lower-profile airstrip about 10 kilometers away.

A hasty perimeter of concertina wire and metal fence posts was constructed around a bare-bones compound once used by the French Foreign Legion, and the Pentagon asked Congress to fund only “minimal facilities” enabling “temporary operations” there for no more than two years.

But Chabelley would follow a pattern established at Lemonnier. Located on the edge of Djibouti-Ambouli International Airport, Lemonnier also began as an austere location that has, year after year since 9/11, grown in almost every conceivable fashion. The number of personnel stationed there, for example, has jumped from 900 to 5,000 since 2002. More than $600 million has already been allocated or awarded for projects such as aircraft parking aprons, taxiways, and a sizeable special operations compound. It has expanded from 88 acres to nearly 600 acres. Lemonnier is so crucial to U.S. military operations that, in 2014, the Pentagon signed a $70 million per year agreement to secure its lease through 2044.

But as the base grew, the skies over Lemonnier and the adjoining airport became increasingly crowded and dangerous. By 2012, an average of 16 U.S. drones and four fighter jets were taking off or landing there each day, in addition to French and Japanese military aircraft and civilian planes, while local air traffic controllers were committing “errors at astronomical rates,” according to a Washington Post investigation. The Djiboutians were specifically hostile to Americans, ignoring pilots’ communications and forcing U.S. aircraft to circle above the airport until low on fuel  — with special ire reserved for drone operations — adding to the havoc in the skies. While the U.S. did not find Djiboutian air traffic controllers responsible, six remotely piloted aircraft based at Lemonnier were destroyed in crashes, including an accident in a residential area of the capital, prompting Djiboutian government officials to voice safety concerns.

As Lemonnier expanded, the Chabelley site underwent its own transformation. Members of the Marines and Army conducted training there during 2008 and, in 2011, troops began work at the base with an eye toward the future. That October, a Marine Air Traffic Control Mobile Team (MMT) undertook efforts to enable a variety of aircraft to use the site. “We provide our commanders the ability to keep the battle line moving forward at a rapid pace,” said Sgt. Christopher Bickel, the assistant team leader of the MMT that worked on the project.

It was in February 2013 that the Pentagon asked Congress to quickly supply funds for “minimal facilities necessary to enable temporary operations” at Chabelley. “The construction is not being carried out at a military installation where the United States is reasonably expected to have a long-term presence,” said official documents obtained by the Washington Post. The next month, before the House Armed Services Committee, then-chief of Africa Command (Africom), Gen. Carter Ham, explained that agreements were being worked out with the Djiboutian government to use the airfield and thanked Congress for helping to hasten things along. “We appreciate the reauthorization of the temporary, limited authority to use operations and maintenance funding for military construction in support of contingency operations in our area of responsibility, which will permit us to complete necessary construction at Chabelley,” he said.

In June 2013, the House Armed Services Committee noted it was “aware that the Government of Djibouti mandated that operations of remotely piloted aircraft (RPA) cease from Camp Lemonnier, while allowing such operations to relocate to Chabelley Airfield, Djibouti.”

But there was another benefit of moving drone operations from the capital to a far less visible locale. In an Air Force engineering publication from the same year, U.S. Air Forces in Europe/Air Forces Africa engineers listed as “significant accomplishments” the development and implementation of plans to shift drones “from Camp Lemonnier to Chabelley Airfield … providing operations anonymity from the International Airport and improving host-nation relations.”

Tim Brown of GlobalSecurity.org notes that Chabelley allows the U.S. to keep its drone missions under much tighter wraps. “They’re able to operate with much less oversight — not completely in secret — but there’s much less chance of ongoing observation of how often drones are leaving and what they’re doing,” he told me recently.

Dan Gettinger, the co-founder and co-director of the Center for the Study of the Drone at Bard College and the author of a guide to identifying drone bases from satellite imagery, agrees. “It seems they started with two CAPs — combat air patrols — about seven aircraft, a mix of Predators and Reapers,” he said. “And since then, we’ve really seen expansion, particularly within the last couple months; a few more hangars and certainly a lot more facilities for personnel at Chabelley.”

By the fall of 2013, the U.S. drone fleet reportedly had been transferred to the more remote airstrip. Africom failed to respond to questions about the number and types of drones based at Chabelley Airfield, but reporting by The Intercept, drawing on formerly secret documents, demonstrates that 10 MQ-1 Predators and four of their larger cousins, MQ-9 Reapers, were based at Lemonnier prior to the move to the more remote site. Neither the Pentagon nor Africom responded to repeated requests by The Intercept for comment on other aspects of drone operations at Chabelley Airfield or the transformation of the outpost into a more permanent facility. The reasons why aren’t hard to fathom.

“These are JSOC and CIA-led missions for the most part,” Gettinger told me recently, conjecturing that the hush-hush operations are likely focused on intelligence, surveillance, and reconnaissance activities and counterterrorism strikes in Somalia and Yemen, as well as aiding the Saudi-led air campaign in the latter country. Indeed, an Air Force accident report obtained by The Intercept via the Freedom of Information Act details a February 2015 incident in which an MQ-9 “crashed during an intelligence, surveillance, and reconnaissance mission in the United States Africa Command Area of Responsibility.” The Reaper, assigned to the 33rd Expeditionary Special Operations Squadron operating from Chabelley had flown “about 300 miles away from base” when it began experiencing mechanical problems, according to the pilot. It was eventually ditched in international waters.

Special Operations Command, JSOC’s parent organization, would not comment on Gettinger’s assertions. “We do not have anything for you,” responded spokesperson Ken McGraw.

Despite the supposed temporary nature of the Chabelley site, Africom “directed an expansion of operations” at the airfield and the U.S. inked a “long-term implementing arrangement” with the Djiboutian government to establish Chabelley as a “enduring” base, according to documents provided earlier this year to the House Appropriations Committee by the undersecretary of defense (comptroller). The Air Force also reportedly installed a “tactical automated security system” — a complex suite of integrated sensors, thermal imaging devices, radar, cameras and communications devices — to provide extra layers of protection to the site.

In June, the Pentagon contacted the House Appropriations Committee about reallocating $7.6 million to construct a new 7,720-meter perimeter fence around the burgeoning base, complete with two defensive fighting positions and four pedestrian and five vehicle entry points that also “provides a platform for installing advanced perimeter sensor system equipment.” Last month, defense contractor ECC-MEZZ LLC of Burlingame, California, was awarded a $6.96 million contract for a fence, gates, a perimeter roadway, and a modular guard tower.

Africom remains close-lipped about the expansion and increasing importance of Chabelley. Phone calls and emails seeking comment were ignored. Multiple requests by The Intercept were even “deleted without being read” according to automatic return receipts. After days of also sending requests to Major James Brindle at the Pentagon’s press office, it became apparent that The Intercept isn’t alone in getting the cold shoulder when it comes to America’s preeminent African drone base. A note from Brindle suggested Africom didn’t want to talk to him about Chabelley either. He had apparently passed along my requests only to be similarly ignored. “Still waiting on a reply from Africom. Sorry,” was all he wrote.