“The revolution won’t be televised ya’ll know that.
And if it does get televised they gonna make it look as bad as possible.” – Shoota

The nationwide protests after the police shooting of Michael Brown in Ferguson have brought much needed attention to issues of institutional racism, police brutality and the killing of unarmed black men across the US. The #BlackLivesMatter protests have also brought people together and created unity in black communities throughout the country.

Mainstream media (MSM) broadcast images from Ferguson of stores being looted and buildings up in flames. The images shown in MSM succeeded in creating a massive media spectacle. MSM combined with some elements in social media also managed to push false narratives into the public discourse regarding who exactly was in the Ferguson streets and what they were doing there. The narrative that “thugs” were causing destruction and mayhem in Ferguson was amplified in MSM in attempts to smear and discredit the #BlackLivesMatter protests. But who are these so-called “thugs” running amok in Missouri?

The word “thug” is a hot button word. It has a negative connotation, bringing to mind a mental image of gang members. Detractors tweeted images of red and blue bandana-wearing black men as proof that thugs were present in Ferguson and therefore police violence used against protesters was justified.

Indeed we saw images of Bloods and Crips participating in Ferguson protests, but we did not see them looting stores – we saw them protecting local businesses. Some of those gang members were also organizing their communities and rival gangs were (and still are) working together. 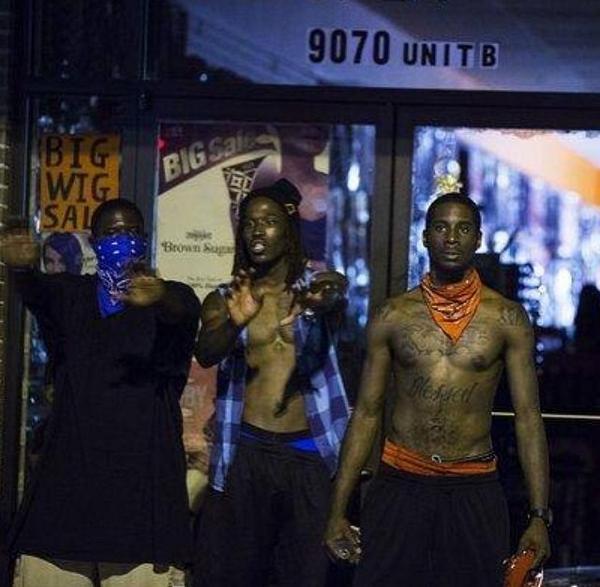 WHAT THE NEWS WONT SHOW: Two CRIPS and a BLOOD gang member, together preventing people LOOTING this shop.

A video was sent to the Revolution News facebook page a few months ago and it had a powerful impact on us. We have not shared it yet because we wanted to learn more about these guys first. We were impressed with what they had to say.

The following video by Shamir Maloney is a very candid interview with Trev and Shoota, members of the Bloods, speaking about their experience protesting in Ferguson.

They have some very reasonable opinions. They want laws to be changed. Background checks on cops coming from the military who return with PTSD, working doubles when they’re supposed to be on point. They want better laws for who is running their streets, for cops to have some sympathy and talk to them about what’s going on.

They want kids to look back at Ferguson protests and say, “bruh they straight changed it.”

Trev and Shoota are both pictured below in this tweet along with Khalil Coleman from Occupy the Hood Milwaukee. They say that in protests the colors of their bandana don’t matter, as long as it keeps the tear gas out. 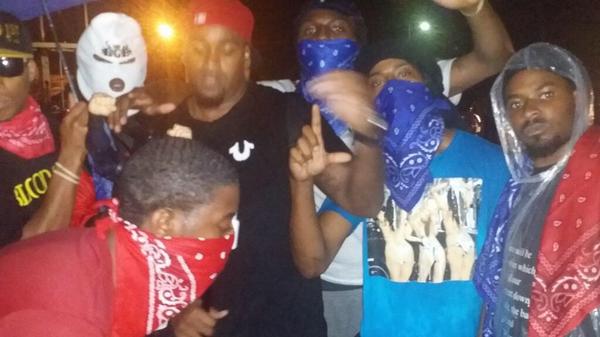 Trev has been arrested since the video was filmed. He is currently serving 2 years. We   don’t know why he was arrested, we are working on learning his exact charges. He was on probation during the Ferguson protests and we are not sure what he was previously charged with either but will update when we find out.

As Trev says in the video, fair is fair. If he does a crime, he goes to jail.

But what happens when a gang member with a criminal record who is released on probation gets re-arrested for protesting? What happens when they commit acts of civil disobedience? If they are arrested for failure to disperse at a protest, are they penalized with harsher sentences due to their past records? Do gang members with criminal records have a first amendment right to protest peacefully?

Shoota, who was still protesting after this video was made, is now in Milwaukee helping with protests supporting Dontre Hamilton. Below is a follow up interview with Shoota where he explains more about his experiences protesting, such as being hit with rubber bullets, tear gassed and harassed by police in Ferguson for “abiding by the law and doing what the Constitution says we can do.” He was also “roughed up and slammed on the ground” in Milwaukee.

“Milwaukee came to shine in my city so I got to go show the love for theirs,” Shoota says.

Shoota also reveals something important that perhaps has not been highlighted enough: people in these communities are scared. Those who have previous felonies are afraid to protest, and they have good reason to fear. The risks they take to exercise their first amendment rights are much higher than the average protester. If people like Trev and Shoota are subjected to arbitrary arrests (like we see happen all the time) they don’t get held for a few hours and released on bail. They risk going to jail for a long time.

Regardless of the consequences, they are not only protesting, they are on the front lines. And let’s be clear, these guys are no angels. They have a past. They’ve been through the system. They are fully aware of what will happen if they have past records or pending warrants and get arrested while protesting. Everyone else speaks for them because when they speak for themselves, they go to jail.

Crimes they committed in the past should not invalidate their voices in the present. On the contrary, we as a society need to listen to their voices above all others. They come from communities most affected by poverty, crime and police brutality. They are the statistics everyone is talking about: poor, black men with felonies. They are the most marginalized in 21st century USA. They are working from within to make positive changes and their voices are being lost in the media spectacle that has become the “Thugs of Ferguson.”

“Call me a nigga, call me a thug, but don’t forget changemaker.”