[When people rise, and believe that the State offers no relief or solution, they turn away from elections, reject the credibility and false promises of the political system, and consider what it will take to take matters into their own hands.  It happens all over the world. — Frontlines ed.]

The 2014 campaign to boycott the election in Brazil

Election materials are set ablaze in front of a polling booth after an attack by protesters in Bogra January 5, 2014. Bangladesh’s ruling Awami League was poised on Sunday to win a violence-plagued parliamentary election whose outcome was never in doubt after a boycott by the main opposition party. — Photo by Reuters 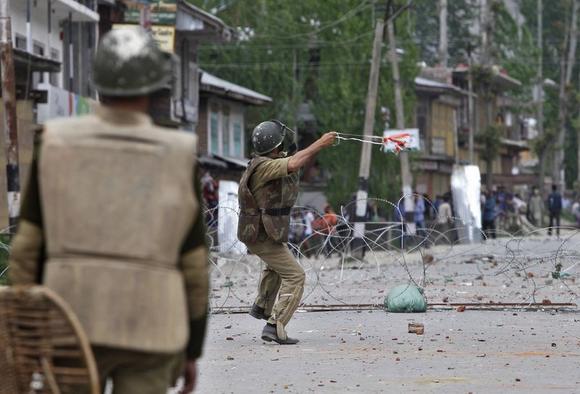 Kashmir:  A policeman throws a stone towards Kashmiri protesters during an anti-election protest in Baramulla district, north of Srinagar May 7, 2014.

India: With the advance of technology, now-a-days even Maoists have become tech-savvy, they sand bulk-SMSes in Bihar and Jharkhand urging people to boycott upcoming Lok Sabha election. A police official was quoted as saying, “Maoists are sending bulk SMSes to mobile-phone subscribers and appealing to them to boycott the ensuing general elections.” The SMSes were issued on behalf of the Communist Party of India-Maoist border zonal committee spokesperson Avinash. Maoists also called for poll boycott in Jamui, Lakhisarai, Banka, Gaya “In the SMSes, Maoists have urged workers, farmers, youth, women, progressive intellectuals, senior citizens, nationalist and revolutionary people to boycott the polls,” police said. Read more at: http://news.oneindia.in/india/maoists-become-tech-savvy-send-sms-to-boycott-election-in-bihar-lse-1421856.html 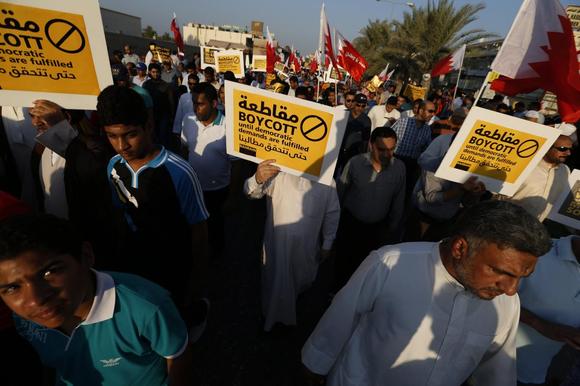 Bahrain: Among other things, Bahrain providing home port for the US 5th Fleet is not on the ballot. And, organized by the Shi’ite opposition, protesters holding a signs march during a rally organised by Bahrain’s main opposition party Al Wefaq in Budaiya, west of Manama September 19, 2014.

1980’s Shining Path poster. When Peru’s military government allowed elections for the first time in a dozen years in 1980, the Shining Path was one of the few leftist political groups that declined to take part. It chose to begin guerrilla war in the highlands of Ayacucho Region. On May 17, 1980, on the eve of the presidential elections, it burned ballot boxes in the town of Chuschi. It was the first “act of war” by the Shining Path.

In November, 2013, the electoral boycott called by the CPN-Maoist and others resulted in 5.4 million fewer voters than the last election.  Here, pictured, is the village where the 10-year Maoist rebellion and people’s war began in 1996 (which ended in 2006) —  Thawang village, the historic heartland of the Maoist rebellion —  received not a single vote.

Protests calling for boycott of elections took place across all of Jordan in January, 2013 [Reuters]