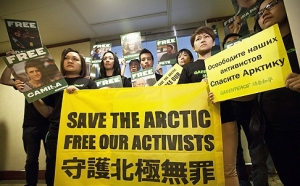 Activists came out with a united call for Russia’s release of 30 Greenpeace activists after being jailed for protests against Arctic oil drilling.

Rock stars and celebrities joined a worldwide vigil on Saturday in support of 30 Greenpeace activists whose jailing by Russia after a protest against Arctic oil drilling sparked a new row between Moscow and the west.

Pressure has been mounting on Russia from both activists and governments shocked by Moscow’s decision to level full-blown piracy charges against Greenpeace’s Arctic Sunrise crew. But Moscow displayed few signs of leniency on Saturday as it hit out at both Greenpeace and the Dutch government under whose flag the environmental lobby group’s ship sailed.

“Everything that happened with the Arctic Sunrise is a pure provocation,” Russia’s Deputy Foreign Minister Alexei Meshkov said.

“Free the Arctic 30” The global day of solidarity, kicked off on the sandy beaches of Australia and stretched across swathes of Africa and Europe before its expected conclusion outside Moscow’s science and culture centre in Washington.

Russian activists dressed in bright yellow sailing jackets held a small vigil near Moscow’s iconic Gorky Park during which they held up posters with photographs of the detainees. About 1000 people gathered outside the Russian embassy in London for a two-hour demonstration that featured A-list celebrities, such as “Sherlock Holmes” star Jude Law.

Activists from Greenpeace Africa also took the streets in Johannesburg, Cape Town and Durban. Ruth Mhlanga, Greenpeace Africa campaigner, said in a statement released to Sapa: “It is so important that our brave colleagues who are behind bars in Russia know that they are not alone. Today we show that millions of us are thinking of them, standing with them and doing everything we can to secure their freedom.”

About 300 activists in Paris witnessed a large yellow banner proclaiming “Free the Climate Advocates” being lowered from a crane over the Place de la Republique and attached to the arm of a giant statue at the centre of the square.

Another 1 000 Greenpeace sympathisers – some of them dressed in pirate costumes – gathered outside the Russian embassy in The Hague for a noisy demonstration featuring whistles and drums.

“If they were pirates, then we are proud to be pirates too,” 39-year-old demonstrator Erik Mekenkamp told AFP before the crowd set off for a rally outside the United Nations’ International Court of Justice.

About 500 Greenpeace supporters also came out for a two-hour rally in Stockholm that included politicians from both Sweden’s governing coalition and the opposition. Dozens of people also came out on the public squares of Warsaw and Rome as well as Vienna and other European cities and capitals.

Russian authorities impounded the 950-tonne icebreaker last month after it approached the world’s first oil rig in the pristine Barents Sea – the focus of energy companies from around the world. A court in Russia’s northwestern region of Murmansk has since charged all crew members, who come from 18 countries including Britain and US, with charges that carry jail terms of up to 15 years.

The incident has set off a burgeoning diplomatic effort to secure the activists’ release despite Russia’s tough stance. The Netherlands broke more than two weeks of silence about the case on Friday by starting legal action under the UN Convention of the Law of the Sea, aimed at quickly freeing the crew.

Russia’s Meshkov fired back on Saturday that the Dutch had been repeatedly warned about the dangers of the ship’s actions. “In the past year-and-a-half, Russia has asked the Dutch side on many occasions… to forbid this ship’s actions,” Meshkov told RIA Novosti news agency.

“Unfortunately, this was not done. So now we have many more questions for the Dutch than they have for us.”