[The following three articles, from the Nepali bourgeois press, describe new twists and turns in the politics of the former kingdom and nascent republic.  The announcement of the move by the leadership of the CPN(M) may have some relation to Baidya’s recent trip to capitalist-imperialist China (countering the UCPN(M)’s embrace of relations with the aggressive-yet-comprador Indian  bourgeoisie).

And the move also reflects the ongoing urban orientation of the CPN(M).  The masses of peasantry in the countryside will undoubtedly view this with dismay, as a further CPN(M) downgrading of the struggle against feudal relations–a struggle which has been repeatedly downgraded, marginalized, neglected and suppressed since the end of the People’s War seven years ago.

On the other hand, there are feudal forces (landlords) who have indicated their love of this shift.

And Baburam Bhattarai, speaking for the revisionist-cum-bourgeois “republicanism,” jumped on it immediately, condemning the “collaboration” of Baidya and Biplav with the king. (see the third article, below).

With this, what has been characterized as the struggle of a revolutionary CPN(M) vs. a revisionist and neo-comprador UCPN(M) begins to reflect two competing forms of nationalism, one aligned with China, the other with India.

CPN-Maoist, the breakaway faction of Nepal‘s Unified CPN-Maoist, today said that it could join hands with former monarch King Gyanendra for the sake of protecting “nationalism”.

CPN-Maoist Chairman Mohan Vaidya said that there could also be collaboration with the former king, “who carries true feelings of nationalism”.

66-year-old Gyanendra’s reign ended in 2008 when the Constituent Assembly declared Nepal a republic and abolished the monarchy.

At a function in Nuwakot district, Vaidya also said that there was no alternative to the formation of a greater front with all the nationalist forces including the former king on this issue.

CPN-Maoist is leading a 33-party alliance which is opposing the interim election government’s plan to conduct Constituent Assembly polls on November 19.

Vaidya made it clear that the alliance could have a partnership with anyone on the issue of nationalism.

He, however, did not elaborate how and from which side nationalism faces threat.

Claiming that the upcoming elections will not solve Nepal’s problems, the dissenting fringe parties have said that it would rather invite a bigger national crisis as the polls were announced by “an unconstitutional government” without ensuring consensus among political parties.

The parties have been demanding that the current Khil Raj Regmi-led dispensation be replaced with a political party-led government and the election scheduled for November 19 be deferred.

The government recently sent an invitation to Vaidya and his alliance for talks in an attempt to convince the protesting parties to participate in the upcoming polls.

Stating that it was positive of the government to invite them for talks, Vaidya said that they would agree to talks only if they are held without any pre-conditions. 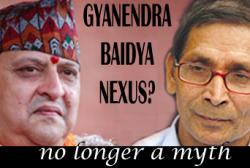 Tuesday, July 23–Secretary Netra Bikram Chand ‘Biplav’ of Nepal Communist Party-Maoist has said that a deal with former King Gyanendra Shah is possible on the issues of preserving nationalism and sovereignty.

But this could also be taken as practicing equi-proximity theory with the immediate neighbors.

Addressing a press-gathering in Dhangadi, July 21, 2013 he said, “There is the possibility of cooperation with the Palace, Army and Police for preserving nationalism.”

“If Gyanendra says that the country is facing threat and seeks cooperation with us there is the possibility of a deal to preserve the country.

“Gyanendra is more nationalist than the rest,” he said and added, “No talks with Gyanendra in this regard have yet taken place.”

The China factor has well penetrated in the scheme of Nepali politics. It is not that hard to imagine this likelihood.

KATHMANDU, JUL 23 – Former Prime Minister and UCPN (Maoist) leader Baburam Bhattarai has taken a serious exception to the CPN-Maoist’s statement regarding possible collaboration with former royalists under the pretext of being nationalist.

He accused the former King Gyanendra Shah of hatching conspiracy against the upcoming Constituent Assembly (CA) elections in the name of distributing relief to flood victims.

He was referring to the ongoing visit of deposed King Gyanendra Shah who is currently on a visit to far-western region to dole out relief to the victims of recent floods.

Talking to correspondents of major national dailies at his Sanepa-based residence on Tuesday, Bhattarai claimed to have received tip-off that the deposed king has mobilised his supporters to revive monarchy.

The former prime minister claimed that he would have sent the former King behind bars if he was still holding the PM’s post.

“If I were still holding the executive post I would have sent Gyanendra to Jail. In what capacity is he doling out relief in this monsoon season?” Bhattarai questioned.

He went on to say that the CPN-Maoist leader Mohan Baidya’s statement of collaborating with the former King would further put the nation under peril.

“Where will the nation head if people who claim themselves to be revolutionary start talking about possible collaboration with former King,” Bhattarai argued.

2 thoughts on “Nepal: The Strange Bedfellows of Nationalist Politics”