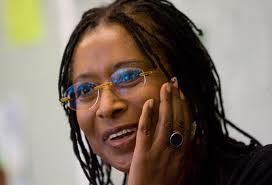 In the comments section of a recent online article in the right wing New York Jewish publication, Algemeiner, not to be confused with the Frankfurter Allgemeine but conceivably with Der Sturmer, there was an argument over whether or not the “Mossad should deal with” Alice Walker as punishment for the critical comments directed towards Israel and American Jewish supporters of Israel in her latest book, “The Cushion in the Road” which, we can assume, none of those commenting had read.

All it took to set off the threat and a stream of racist venom against the 69 year African-American author was an inflammatory headline in Algemeiner’s June 19th edition:“ADL Blasts Anti-Israel Author Walker: ‘She is ‘unabashedly infected with Anti-Semitism’” followed by an article in the same vein.

As could be anticipated from the headline, the story featured a statement by Anti-Defamation League director, Abe Foxman:

“Alice Walker has sunk to new lows with essays that remove the gloss of her anti-Israel activism to reveal someone who is unabashedly infected with anti-Semitism.

“She has taken her extreme and hostile views to a shocking new level, revealing the depth of her hatred of Jews and Israel to a degree that we have not witnessed before.  Her descriptions of the conflict are so grossly inaccurate and biased that it seems Walker wants the uninformed reader to come away sharing her hate-filled conclusions that Israel is committing the greatest atrocity in the history of the world.”

According to an ADL press release, Walker’s book “devotes 80 pages to the Israeli-Palestinian conflict, often making comparisons between Israel and Nazi Germany, denigrating Judaism and Jews, and suggesting that Israel should cease to exist as a Jewish state.”

To make the point, the ADL includes four examples. Let’s look at one of them:

“Walker analogizes the Palestinians’ situation with the civil rights era and discrimination against Blacks in the American South.  She writes: ‘It is because I recognize the brutality with which my own multibranched ancestors have been treated that I can identify the despicable, lawless, cruel, and sadistic behavior that has characterized Israel’s attempts to erase a people, the Palestinians, from their own land.’”

In case the inner racists of its readers hadn’t been stirred up enough by Foxman’s rant, the Algemeiner reporter added that “Walker has a history of making extreme anti-Israel statements. In June 2012 she refused to allow an Israeli company to publish a Hebrew edition of her novel, ‘The Color Purple.’ Most recently, Walker wrote a letter calling on the singer-songwriter Alicia Keys to cancel her upcoming July 4th concert appearance in Tel Aviv.”

“In her book,” the article concludes, “Walker accuses Israel of ‘genocide,’ ‘ethnic cleansing,’ ‘crimes against humanity,’ and ‘cruelty and diabolical torture.’” In so doing, it should be noted, she is simply observing the same phenomena that a number of dissident Israelis have previously noted.

The Jewish establishment and the ADL, in particular, have long had a pre-occupation, if not an obsession, with the notion of “Black anti-Semitism.” In 1992, it published a 50 page letter-size “ADL

Research Report,” entitled “The Anti-Semitism of Black Demagogues and Extremists” which included just about everyone who had broken the unwritten taboo of speaking and writing about the role of Jews in the African slave trade.

For having the temerity to step outside of the invisible plantation in which a patronizing Jewish establishment has long consigned the black intelligentsia and political class, Walker is being subjected to a level of racist venom that one might expect from a KKK journal.

When one of Algemeiner’s commenters, Eric R., calls for “Mossad to deal with her” and  another commenter, Boston University history professor, Richard Landes, replies that “this is a stupid comment and should have been moderated out,” Eric R. writes back to justify his virtual call for her to be eliminated, Mossad style:

“Tell me, Professor Landes, why you are against Israel dealing with her and other Nazis in this manner? Don’t just give me a reflexive ‘How awful! We can’t say that!’ How else are you going to stop such hatred coming from such sick, hate-filled scum like Walker, who is basically inciting people to genocide? Persuade them? This woman is deranged by her hate, and can no longer be reasoned with. People like her who support and incite people to murder Jews are just as bad as the suicide bombers themselves….

“Israel is dealing with two genocidal groups that increasingly dominate the world – Marxists and Islamists. Playing nice will no longer work with such brutal totalitarian ideologies. To survive, Israel will have to play some very brutal hard ball. That is just a fact of life in an increasingly intolerant, anti-Semitic and totalitarian world. Trying to silence me does not change that.”

Landes, donning his professorial robes, writes, in another comment , that “one of the tragedies of the african-american community is its susceptibility to both anti-semitism and the kind of demon-infested conspiracy thinking that informs Walker’s world view and like so many other manifestations of anti-Semitism historically, it not only hurts Jews, in the long run it does even more damage to the cultures of the anti-semites.

“no one but the warmongers win with this kind of thinking… and yet I’m sure Alice thinks of herself as a good person working for peace and justice.”

M Ben Faivol, a regular commenter on Algemeiner and other Jewish online journals, had different advice for Eric, something akin to a Psy-Op attack on Walker.

“The Mossad should not deal with her; for the Mossad to do so would give her new found stamina as well as give her cause even further celebrity status,” he wrote. “If Eric really wants to do something about Ms. Walker, he should take responsibility and recognize that he has power to change the world–her world.

“He should undertake such activities as to become fully versed in her works that are anti-Semitic as well as what else she has done that is Pro-Palestinian. He should then find the areas he sees where confrontations leading to embarrassing her publicly can be addressed. THEN he should find a credible person or organization that has like-minded people who can help him formulate the attacks. At that point, he is ready to gain supporters to help and to then undertake non-violent confrontations. Good Luck. If I can help you, please get my email from Algemeiner.”

That Algemeiner did not remove the Mossad comment (while censoring one of mine) should tell the reader all she or he needs to know about the publication. Among the 68 comments still on the site, there are only two that suggest that Walker may be on to something. As for the rest there are some that are just as ugly whose authors have no compunction about posting their names.

It is also obvious that none of the latter take into consideration that Israel might be a valid object for criticism.

George Yegorov who apparently lives in the Ukraine was among the first:

“Alice Walker isn’t a thinker or a writer,” he writes. “She rode to fame during a time when critics championed ‘ethnic’ writing, no matter how bad it was. And now because of the dim-wittedness of those times, during which all voices were ‘valid’ and ‘equal’, even though it is more than apparent that art distinguishes itself by talent only…If people had just waited for real talent to emerge instead of dressing a wart hog in a ball gown and giving it a rhinestone tiara, we wouldn’t now be stuck with Alice Walker.”

Rochelle Davidson would burn her books: “Everyone who bought this trash talking book should get together and burn them all at once. We can’t allow this hatred talk to stay available to anyone. We should boycott buying or reading it and make sure that she knows WHY. She would be the first one to scream when there are anti-black rantings going on.”

Monique Shanabarger, 75 years old from Morocco and a devoted fan of Daniel Pipes, can not contain herself, nor her racism. Here she is unedited (but broken into paragraphs for easier reading):

“Alice Walker is your typical angry, resentful, envious and enraged black american female,” she writes, “who takes advantage of our freedoms to spew out her hate and jealousy of the success of Israel and the brilliant intellect of the jewish people.In comparaison a great majority of her kind have really never totally gave up the law of the jungle with a hidden sense of inferiority and savage, bacward reasonning  no matter how much instruction and emancipation they get in the modern world.

“Well,our left leaning jewish people ought to stop giving an audience and importance to her kind and put them in their place and stop being hypocritical like them.The jews should help and take care of their own poor and Israel and be proud and assertive before there is another holocost.Real charity begins at home,you liberal jews had better ponder on that,wake up and smell the coffee and fast while you can!

“This is coming frome me a 75 years old jewish Moroccan woman whose father had prepared to gun down his ten children,his wife and himself while the german gestapo was knocking at our door the night the Americans landed and invaded north africa in 1942.They saved us in the nick of time.Remember ALL THAT AND WAKE UP!!!!!”

“Martinique [getting her name wrong]: ‘a great majority of her kind. . . the law of the jungle. . . savage backward reasoning. .. . Ms. Walker is clearly a American is mixed ancestry (both African and European) Your piece sounds as racist as Alice Walker’s drivel. We do not need that kind of language to describe Ms. Walker as the anti-semite she is. She is clearly emotionally disturbed and her ancestry has nothing to do with it.”

A David S Most suspects that “the specific nature of her anti-Semitism indicates some deeper and darker inner hatreds towards Jews than the standard variety. She is probably a follower of Louis Farrakhan who has been preaching this kind of anti-Semitism for years.

“How this woman could become infected with a hate virus so virulent that it lets her write lies, distortions, and outright venom would make a great psycho study. She shares the thinking of such greats as Adolf Hitler and Ken Livingstone, ex-London mayor.”

A Judie Selig writes that: “Alice Walker has shown the world how ignorant and stupid she really has become. She has not been in the limelight for quite awhile and this is giving her 15 minutes of fame that she dearly needs! Her lies about us are disgraceful and we as Jews should take her lack of knowledge as a sign of her losing her place in the world. She is pathetic and needs deep therapy.”

Ruth-Claire Weintraub, a PEP (Progressive Except for Palestine) social worker from New York, now living in Canada, suggests that:

“This is very sad, that a woman with as much sensitivity and insight about the terrible injustices experienced by people of African descent as Alice Walker, is overwhelmed by such a negative bias towards Israeli Jews. I wonder how such utter poison, such poisonous water, got into her well?”

Walker would no doubt reply that she has been to Occupied Palestine and has seen the situation for herself and probably would recommend that Weintraub and the rest of her Jewish critics do the same.

The last comment posted was mine although it took two days to pass muster with Algemeiner’s moderator :

“I have posted all of these comments on my Facebook page for all of the world to see. I can tell you one thing: they will help the sales of her book.”

Jeffrey Blankfort is a journalist and radio host and can be reached at jblankfort@earthlink.net