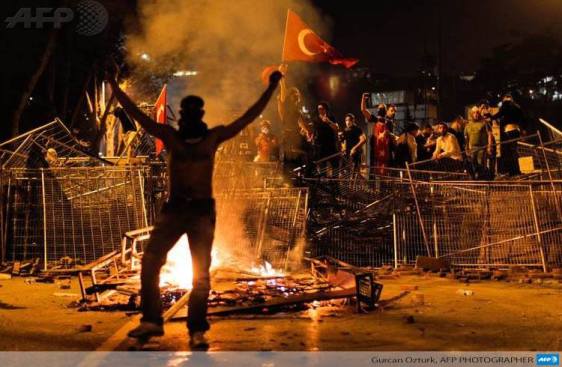 What started as a small group opposed to an development project in Istanbul has become an outpouring of national anger over how the Islamist-rooted government treats its citizens, testing Ankara’s quest to be a model country in its neighbourhood.Turks are increasingly frustrated about what they see as restrictions on their freedom after a series of last-minute reforms were rushed through parliament by the ruling Justice and Development Party (AKP), which enjoys an overwhelming majority.”This is a movement which is a result of growing frustration and disappointment among secular segments of society who could not influence politics over the last decade,” said Sinan Ulgen, visiting scholar at Carnegie Europe.

“This is an unprecedented, abrupt and unplanned public movement that has not been manipulated by any political party. It is a big surprise,” he told AFP. 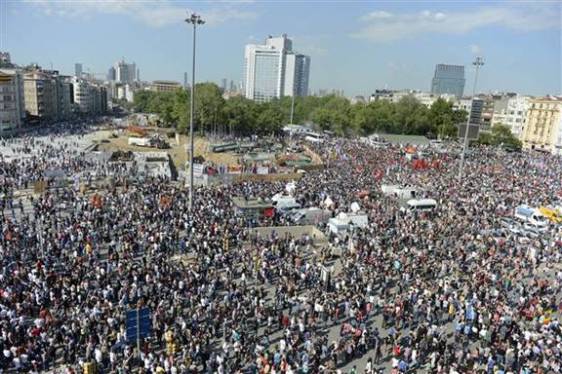 Critics say that Prime Minister Tayyip Recep Erdogan’s rule has left Turkish society more polarised than ever, with opponents of the AKP government openly voicing concerns that Turkey is moving toward conservative Islam.

The ruling party has passed a series of reforms which have outraged many citizens who complain of a “fait accompli” and say it shows a slide toward an authoritarian and conservative agenda.

In 2004, the party attempted to submit a controversial amendment on banning adultery but had to back down amid criticism from opposition parties and women’s groups.

Last year, Erdogan provoked outrage when he likened abortion to murder, and his contentious education reform allowing clerical schools for the raising of what he described a “pious generation” was approved by the parliament in 2012, spreading fears among secularists.

More recently, Turkey’s parliament passed legislation curbing alcohol sales and advertising, which would be the toughest in the republic’s history if the president, a former AKP member, signs it into law.

In April, an Istanbul court ordered a retrial for world-renowned pianist Fazil Say, who was convicted earlier to 10 months in prison for blasphemy over a series of social media posts. The 43-year-old virtuoso has accused the AKP of being behind the case against him.

Turkey is the leading jailer of journalists worldwide, imprisoning even more than China or Iran, according to rights groups.

Hundreds of military officers, academics and lawyers are also in detention — most of them accused of plotting against the government.

“Protesters are speaking out against top-down reforms imposed by the AKP government,” said Ulgen.

“Every democracy has its own failures. Turkey will emerge stronger if the government responds to the public movement through more democracy.”

Erdogan’s ruling AKP first won elections in 2002 on a wave of popular support after years of unstable coalition governments. His party swept 50 percent of the votes in 2011 elections.

Over 10 years, the AKP has boasted major success in transforming the economy after a devastating meltdown in 2001 and has introduced strict budgetary discipline, posting growth rates of over eight percent in 2010 and 2011.

Erdogan has also sought to raise Turkey’s diplomatic profile, often engaging in lectures on how democracy and Muslim values can coexist, in particular in countries swept up by the Arab spring uprisings. 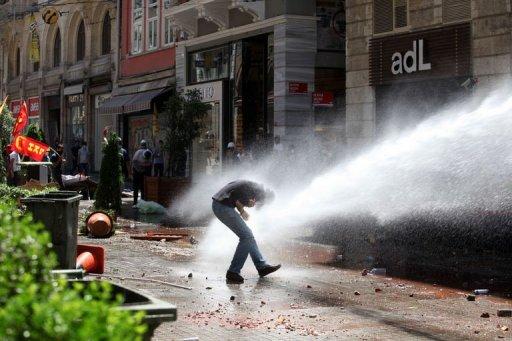 While analysts caution against describing the popular protests here as a harbinger of a “Turkish spring”, there are questions about the heavy-handed government response.

The demonstrations in Turkey took a violent turn after police fired rounds of tear gas to disperse the protesters, which was condemned by rights groups and which dealt a blow to Ankara’s ambitions to become a role model for the Muslim world.

Turkey’s former ally Syria has even mocked Erdogan, who has long urged the regime of President Bashar al-Assad to listen to its people’s demands, and accused the Turkish leader of “terrorising” his own people.

“Turkey is not in a situation to preach democracy because winning elections alone is not an indicator of the quality of democracy,” Ilter Turan, a professor at Istanbul’s private Bilgi University said.

“Mr Erdogan does not accept any limitations to his power as a majority leader,” Turan said.

“He believes whatever he has been doing is a reflection of the democratic will and sees the demands from society as malicious,” he added.

Turkish media hardly covered the protests which was seen as yet another sign of government pressure, with some pro-government newspapers failing to give numbers of protesters who filled up the squares, as well as the wounded in clashes.

One thought on “Turkish protesters have long list of complaints”