The heads of Bangladesh’s textile companies pleaded with foreign retail giants to keep doing business with them after a recent factory collapse that killed nearly 400 people. Bangladesh’s $20 billion garment industry is the second largest in the world behind China. 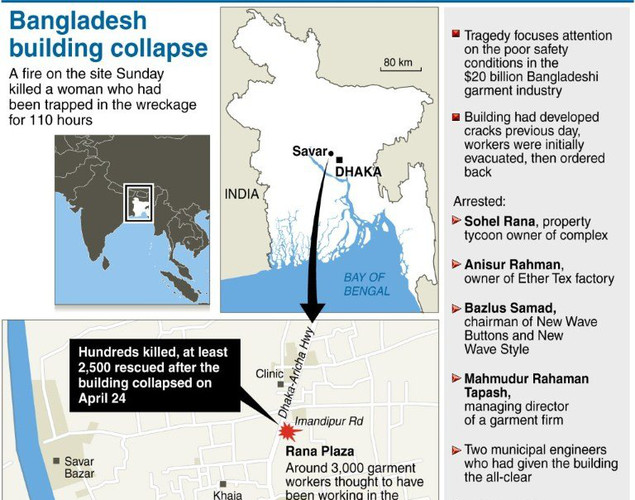 Bangladeshi textile bosses pleaded Monday with Western clothing giants to keep doing business with them after nearly 400 people died in a factory collapse as hopes of finding more survivors faded.

Organizers of the mammoth rescue effort ordered in cranes on Monday to clear the ruins of what was once an eight-story factory compound before it caved in five days ago while some 3,000 textile workers were on shift.

As Prime Minister Sheikh Hasina paid her first visit to the tangle of concrete, the confirmed number of dead stood at 382.

But the toll is expected to shoot up now heavy lifting equipment is being used. Rescuers had earlier been wary of using anything but hand-held drills, over fears that machinery could force more masonry to collapse onto survivors.

Emergency workers, who have been battling the stench of rotting corpses, were shattered by the death late Sunday of a female garment worker who had clung to life against the odds before being overwhelmed by a fire at the scene.

The tragedy has once again focused attention on the poor safety conditions in the $20 billion Bangladeshi garment industry, which is the world’s second biggest after China.

Britain’s Primark and Spain’s Mango have acknowledged their products were made in the block. Italy’s Benetton acknowledged having its clothes made in Rana Plaza recently, but claimed it was a “one-time order”.

Worried that Western firms could look elsewhere, manufacturers met with representatives of leading brand names on Monday in a bid to assure them about safety standards.

Shahidullah Azim, a vice president of the Bangladesh Garments Manufacturers and Exporters Association which represents more than 4,500 factories, said firms such as H&M, Gap, C&A and Li and Fung would be present at the meeting in Dhaka.

“We want to assure them that we’re taking action to prevent a repeat of such tragedies,” said Azim.

“We’ll seek their understanding and will also request them not to cancel orders and shipments,” he told AFP. “We need their help — they are part of us.”

A fire at another factory last November in the industrial hub of Ashulia, where clothing for the likes of Walmart was being made, killed 111 people.

A typical textile worker earns less than 40 dollars a month, with most working around 10 hours a day, six days a week.

Managers at all of the country’s garment factories gave workers the weekend off in the hope that anger over the disaster would subside.

But police and unions said there was a mass walk-out in Ashulia, which is on the outskirts of the capital Dhaka, soon after the reopening on Monday morning and workers then began a protest march.

It is not known how many people are trapped in the rubble of the collapsed building. There are still hundreds of relatives at the scene, many clutching photos of their loved ones, but officials held out little hope.

“We can see some of bodies inside the wreckage,” national fire service chief Ahmed Ali told AFP.

“Cranes will lift the slabs and clear the way for us to go to the pockets which we have not been able to access in the last five days.”

The death of the female garment worker identified as Shannaz, whose courageous struggle became a symbol of hope, cast a deep pall over the rescue effort.

Firefighters were seen weeping after the widowed mother-of-one lost her battle for life when the fire broke out late Sunday.

“The fire broke out as we were cutting a beam to bring out what we believe was the last remaining survivor from the collapsed building. We managed to douse it, but as we came back we saw her dead,” Ali said after the ultimately futile 11-hour operation to bring her out alive.

One of the leaders of the rescue operation said Monday the emergency services would be “doing things very carefully” in case anyone else had somehow managed to stay alive but they were “assuming that there is no survivor”.

Seventeen-year-old Mohammad Badhon, whose mother is a sewing operator and among those still missing, has been waiting at the scene for any news. “I am still hopeful my mother will be rescued alive. God willing, we’ll find her alive,” he said, holding her photo.

Seven people have so far been arrested over the disaster, including the overall owner of the complex, property tycoon Sohel Rana, who was detained as he attempted to cross into India and was flown back to Dhaka.

Among the others also facing charges of causing “death by negligence” are two engineers who are alleged to have given the building the all-clear on Tuesday night after large cracks were found in the walls.