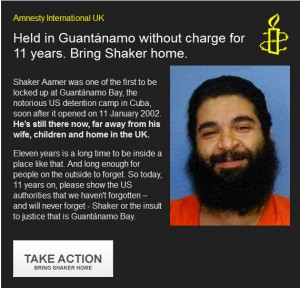 A British resident who has been held by the US without charge or trial for over eleven years has joined the hunger strike in Guantanamo Bay.

Shaker Aamer (46) from South London, whose wife and four children are all British citizens, told his lawyer on 29 March that he had lost over 30 pounds since joining the strike.

Lawyers for the Guantanamo inmates estimate around ¾ of the 166 men still held there have joined the hunger strike, although the US military claims the number is lower.

In a legal declaration filed by his lawyer, Clive Stafford Smith, Mr Aamer also details how he has been subjected to sleep deprivation and violent procedures known as “Forcible Cell Extractions” while attempting to pray, in response to his hunger strike. These procedures are “excruciatingly painful,” particularly because of his long-term back injuries originally caused by mistreatment by the US in Bagram Air Force Base, Afghanistan.

Mr Aamer is protesting his ongoing detention, despite having long been cleared for release by the US authorities and never having been charged or tried with any crime during his eleven year ordeal.  Mr Aamer continues to be held despite British Foreign Secretary William Hague’s public calls for his release.

Reprieve Director Clive Stafford Smith said: “The ongoing detention without charge or trial of these men is an affront to basic principles of justice. Shaker has a wife and four British kids – one of whom he’s never met – in London. The UK just accepts routine assurances from the US that all is well, when all is rotten in Guantanamo Bay. Does the UK really take the position that there is nothing more that can be done if a close ally is committing the on-going torture of Shaker Aamer?”

3. Reprieve, a legal action charity, uses the law to enforce the human rights of prisoners, from death row to Guantánamo Bay. Reprieve investigates, litigates and educates, working on the frontline, to provide legal support to prisoners unable to pay for it themselves. Reprieve promotes the rule of law around the world, securing each person’s right to a fair trial and saving lives. Clive Stafford Smith is the founder of Reprieve and has spent 25 years working on behalf of people facing the death penalty in the USA.