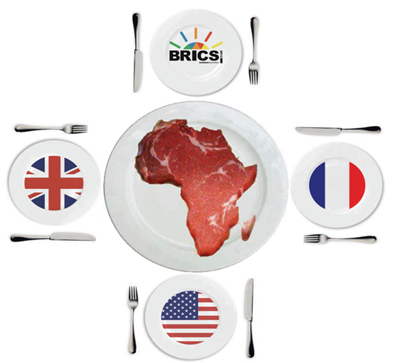 China’s new president Xi Jinping heads to Africa as his country’s influence on the continent soars, but with its big money is provoking resentment.

Xi will visit Tanzania, South Africa and the Republic of Congo as part of his first overseas trip, which begins in Russia on Friday and will include an emerging economies summit in Durban, South Africa.

China’s first contacts with Africa came with the sea voyages of Zheng He, a Chinese Muslim admiral who led expeditions to the East African coast in the 1400s, but little followed for centuries.

During the Cold War, Washington and Moscow competed for allies on the continent with Beijing less successful, although Mao Zedong’s number-two Zhou Enlai went on a major tour in 1964 and China later constructed a railway linking Tanzania and Zambia.

But China’s business boom and its rise to become the world’s second-largest economy has seen financial and trade ties rocket in recent years as it sources many of its raw materials from Africa.

At the same time a new Chinese diaspora has seen huge numbers of traders and small business operators establish themselves across the continent, which has higher growth rates than Europe or the US.

Chinese imports from Africa soared 20-fold in a decade to reach $113-billion last year, according to Chinese government statistics, and China became the continent’s largest trading partner in 2009.

Highlighting the changing relationship, Beijing hosted a summit of 48 African leaders in 2006.

“China-Africa cooperation is comprehensive,” Xi said ahead of his trip where he will join the leaders of Brazil, India, Russia and South Africa at the Brics summit.

In an interview with media from Brics nations, he said Beijing valued “friendly relationships with all African countries, no matter whether they are big or small, strong or weak, rich or poor”.

“No matter whether it is rich or poor in resources, China treats it equally and actively carries out pragmatic cooperation that benefits both sides,” he said.

Xi arrives on Sunday in Tanzania, where China is the second-largest foreign investor with interests in agriculture, coal, iron ore and infrastructure and he will give a major speech on relations with Africa.

China has lent the oil-rich Republic of Congo, his last stop, billions of dollars under a series of agreements, financing a 500km road linking the capital Brazzaville and commercial hub Pointe-Noire, a 120MW hydroelectric dam and other projects.

A presidential source told AFP that Brazzaville considered Beijing an “essential partner” and their relationship “immaculate”.

But China’s emergence as a key investor in Africa has also been accompanied by periodic tensions amid complaints of trade imbalances, and accusations that Chinese workers and entrepreneurs benefit more from the investments than Africans.

Lamido Sanusi, governor of Nigeria’s central bank, blasted China this month in an opinion piece in the Financial Times, saying the relationship was one in which Africa sold its resources for Chinese manufactured goods.

“This was also the essence of colonialism,” he wrote. “The British went to Africa and India to secure raw materials and markets. Africa is now willingly opening itself up to a new form of imperialism.”

China’s vice foreign minister Zhai Jun, who estimated there are between one and two million Chinese entrepreneurs in Africa, acknowledged “growing pains” in the relationship, which he ascribed to causes including “lack of mutual understanding”.

He added: “We hope that all Chinese businesses in Africa can do their own jobs well to play their part in the growth of this continent.”

China has a longstanding policy against what it calls interference in other countries’ internal affairs and does not concern itself with human rights issues in Africa, an approach that is criticised by Western activist groups.

But its stance has enabled it to build links with controversial figures such Sudan’s Omar al-Bashir, who is wanted by the International Criminal Court on charges including genocide and war crimes, and Robert Mugabe of Zimbabwe.

David Shinn, a former US ambassador to Ethiopia and Burkina Faso, told AFP that government-to-government relations between China and African countries “remain strong”.

But he warned that China must address concerns that have been raised, and if not, “some African governments will step up their criticism, at least privately, of these aspects of the Sino-African relationship”.