[We have received the following message from the Malcolm X Grassroots Movement, announcing and detailing the release of a new organizing manual for community self-defense.  When many reform activists continue to appeal to oppressive institutions to solve the problems of repression and oppression, the manual charts a different path where matters are taken into the hands of the people, both in response to specific attacks they face from government and reactionary aggression, but also in building the struggle to end those oppressive powers once and for all.  Well worthy of study and broad distribution and active organizing, Frontlines offers it here (see link at end of announcement), encouraging responses.  — Frontlines ed.] 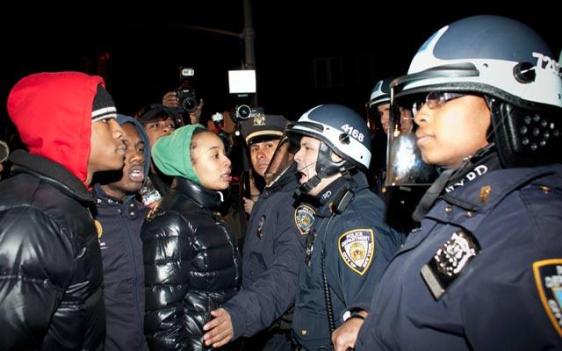 Oppressed peoples and communities can and will only be secure in this country when they are organized to defend themselves against the aggressions of the government and the forces of white supremacy and capitalist exploitation. “Let Your Motto Be Resistance: A Handbook on Organizing New Afrikan and Oppressed Communities for Self-Defense”, is the latest contribution of the Malcolm X Grassroots Movement (MXGM) and the Every 36 Hours Campaign that seeks to strengthen organizing initiatives within Black or New Afrikan communities for self-defense, by presenting these initiatives with a comprehensive analytical framework and practical organizing tools to ground and unite them.

As the extrajudicial killing of Kimani Gray and the more than twenty other Black women and men by the police in the first two months of 2013 clearly illustrate, it is imperative that New Afrikan communities get organized and defend ourselves. As the real economy continues to contract, corporations become more vicious and exploitative, our communities are gentrified and displaced, public goods and services continue to be eliminated or privatized, and the national security state continues to grow and become ever more invasive, the attacks on New Afrikan and other oppressed and exploited people are only going to escalate. We must defend ourselves, and we have every right to do so by any means necessary.

“Let Your Motto Be Resistance” draws on the long history of New Afrikan peoples struggle to realize self-determination and defend our persons, our rights and our dignity from the assaults of the oppressive settler-colonial government and the forces of white supremacy. Building on this history “Let Your Motto Be Resistance” provides in summary form a vision of how we can (re)organize our communities from the ground up to defend ourselves and reassert our fundamental human rights to life, dignity, and self-determination.

We encourage the broad dissemination, discussion, and utilization of this work as a modest contribution towards the effort to rebuild the Black Liberation Movement, Stop the War on Afrikan people, and eradicate white supremacy and US imperialism.

For more information on this work, or to set up trainings or public events regarding its contents or those of the Every 36 Hours report on extrajudicial killings contact Kali Akuno at kaliakuno@mxgm.org.