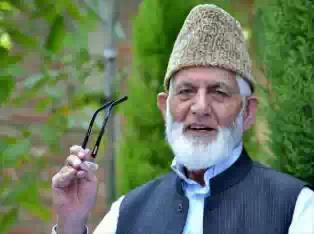 In a statement party head H S Dhami termed the detention of Geelani Sahib ever since the hanging of Afzal Guru on Feb 9 as ‘illegal and unjust’. Taking a dig at Indian civil society and eminent human rights activists based in the capital for their stoic silence, he said the government has stooped too low to gag the voice of Kashmiri people.

Urging the civil society to speak up against state’s highhandedness, he urged the officials of UNHRC, Amnesty International and Human Rights Watch to intervene and take stock of the ground situation vis-à-vis rights violations.

He said the government was highly mistaken that by detaining Geelani Sahib it could break his resolve for carrying forward the struggle for Kashmir’s self-determination.

Accusing the Union Home Minister for his flip-flop position on “Saffron terror and RSS sponsored terrorism”, Mr Dhami urged Mr Sushil Kumar Shinde to restore the civil, political and human rights of Geelani Sahib immediately and allow him to be with his people and family members.