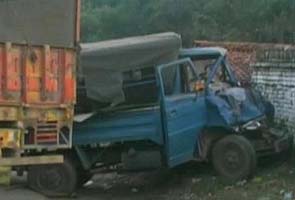 Giridih police confirmed the Maoists had looted three rifles from the police escorts. Late in the evening, police claimed that they arrested two rebels from Bengabad for involvement in the attack.

The handcuffs for the prisoners were found hanging at the gate of the vehicle indicating prisoners had got themselves freed during the attack. Police reinforcements rushed to the spot from the district headquarters and found some explosives on the road.

Mohammad Saleh, a witness, claimed the Maoists had assembled at Mahadev Chauk near Dukhiya Mahadev temple well in advance and attacked the truck to block the police van.

The Maoists snatched four motorcycles from the locals to escape with the prisoners. One of the motorcycle owners, Rajendra Tanti, said he had gone to relieve himself on the roadside when the rebels struck. He claimed the Naxalites used AK-47s and SLRs to attack the van. Witnesses told police that the Maoists had also used two SUVs vehicles.

This was the second Maoist attack in Giridih town. In 2005, Maoists attacked the Mohanpur police camp, killing 10 cops and looting 400 rifles.