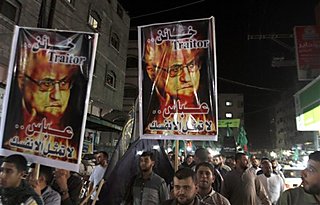 Palestinians march during a protest against president Mahmoud Abbas in the Jabaliya Refugee Camp, northern Gaza Strip Saturday, Nov. 3, 2012. Gazans protested against Abbas’ remarks at an Israeli television that suggested millions of Palestinian refugees and their descendants would not be able to return to the places they fled, or were forced to flee, during the fighting surrounding Israel’s creation in 1948. The posters read: “traitor – you represent nobody but yourself.”(AP Photo/Hatem Moussa)

Israel’s president on Saturday welcomed as “courageous” a strong public show of willingness by Palestinian President Mahmoud Abbas to make concessions on a core issue in peace talks — that of Palestinian refugees.

Abbas told Israeli channel 2 TV on Friday that he does not want to live in his birthplace Safed, a city in northern Israel.

His words drew anger from some Palestinians because they were viewed as relinquishing a long held Palestinian aspiration for the return of those who fled their homes during the fighting between Arab countries and Israel in the wake of the Jewish state’s 1948 independence.

Abbas’ remarks reflect a decades-old understanding among Palestinian officials that only a limited number of the refugees would ever be able to return to their original homes in Israel as part of a peace agreement. It was however the first time he has said so in public to an Israeli audience.

“These are significant words,” Shimon Peres said. “These positions stand exactly in line with those of Israel and with the clear majority of the population, which supports the solution of two states for two peoples. This is a brave and important public declaration in which (Abbas) makes clear that his aim for a state is only within the West Bank and Gaza, and not in the territory of the state of Israel,” Peres said. “(His) courageous words prove that Israel has a real partner for peace,” Peres said.

The refugee issue has been a big obstacle in peace talks. Israel views their entry as demographic suicide and expects refugees to be taken in by a future Palestinian state.

Abbas told the Israeli station that he views only the West Bank, the Gaza Strip and east Jerusalem as a future Palestinian state.

“I am a refugee but I am living in Ramallah. I believe that the West Bank and Gaza is Palestine. And the other parts is Israel,” he told the Israeli station. “I want to see Safed. It is my right to see it but not to live there,” he said.

His comments were in stark contrast to shows on official Palestinian TV that often define cities in Israel proper as Palestinian.

Abbas aide Nabil Abu Rdeneh said the TV appearance does not replace negotiations with Israel and that “the goal of the interview is to influence the Israeli public.”

Abbas has refused to resume talks until Israel ends settlement construction in the West Bank. Israel has frequently called for peace talks to resume without preconditions, saying that the settlement issue will be resolved along with other core disputes through negotiations.

“In connection to what Abbas said in the interview unfortunately there is no connection between his words and his deeds,” the statement said.

Nimer Hammad, an adviser to Abbas, said he was being “realistic.”

“He knows he can’t bring back five-and-a-half million Palestinian refugees to Israel,” Hammad said. Palestinians consider refugees to include not only the original 700,000 from the 1948 war, but also their 4-5 million descendants.

The comment came as Abbas prepares for a trip to the United Nations later this month, where he will seek an upgraded observer status for the Palestinians at the U.N. Palestinians believe the upgrade will add pressure Israel to withdraw from its current positions to lines it held before the 1967 war. Israel says negotiations alone should set a course for Palestinian statehood.

The prime minister of Abbas’ rival government in Gaza condemned his remarks, voicing a view was shared by many Palestinians there. Some supporters from Abbas’ own party, Fatah, said they hoped he leaves power.

In the northern Gaza town of Jabalia Saturday night, hundreds of Palestinians gathered to watch men burn posters of a suited, smiling Abbas.

They waved the green flags of Hamas, the militant Islamic group that seized Gaza five years ago after bloody street battles with forces loyal to Abbas. Others held up colorful posters with the word “traitor” emblazoned on photos of Abbas. One Hamas official shouted: “We have burnt Abbas, this rotten picture.”

“My daughter asks me, does Abbas work for us, or for the Jews?” said Sahar al-Muqayid, 35. The woman, who wore the face veil of a devout Muslim, bought four of her six children to the protest.

By Gaza standards, the demonstration was small, as were protests that took place in other parts of the territory. Near the Jabalia demonstration, dozens of families strolled around streets brightly lit by thudding generators on the balmy Saturday evening, ignoring the nearby protest.