[See the two news reports, below.  Frontlines will post new information as it becomes available and confirmed. — Frontlines ed.]

Though the UCPN-Maoist led government seems [satisfied at its – ed.] management of its former combatants by integrating in the Nepal Army (NA), its splinter faction CPN-Maoist has began to revive ‘people’s war’ days through the announcement of military structure of the party. The military structure of CPN-Maoist is going to be announced formally under the name of Rastirya Yuwa Swayamsewak Bureau from the national conference scheduled to be held in Dhulikhel on October 10-12.

It is said that the party secretary Netra Bikram Chanda led the military structure is also proposed to name as National Youth Volunteers Bureau. The party has called the national conference with intent to fix the name of the structure and discuss about the future activities, clams a reliable source close to the party. Though the party leaders have a claim that they have no immediate plan to launch armed struggle, it is suspected that the party would launch another ‘people’s revolt.’

Some leaders have repeatedly been threatening that they would take up arm if their demands are not addressed. It is claimed that the military wing has already acquired about 10 dozen guns registered in the name of the UCPN-Maoist including some arms used in the security of leaders. Likewise, it is also claimed that about 1000 armed trained former PLA combatants, who opted for voluntary retirement after last year’s peace deal and disqualified fighters who were discharged from cantonments in 2010, have already reunited under the military structure of the party.

Conference to expose corrupts The CPN –Maoist has said that it is going to expose leaders and cadres of the UCPN-Maoist, who amassed wealth illegally after the party joined mainstream politics in 2006. Revealing about the plan of the purposed national conference party secretary Chand had said his led wing, National People’s Volunteer Bureau, will next week start a campaign to expose the corrupts of the country including his former party’s leaders. However, Chand dismissed the report about the plan to form a military structure.

“We have no plan to expose the military wing now but we will openly declare the formation of a People’s Liberation Army if Nepali politics so demands,” he said on Sunday while addressing a press conference. However, he revealed that significant number of former PLA combatants who are dissatisfied with the “move of the UCPN-Maoist have joined the volunteer’s bureau. 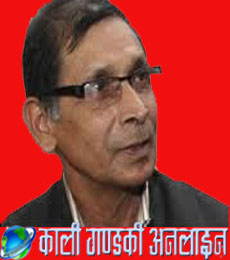 KATHMANDU, OCT 02 – In a move reminiscent of the “People’s War” days, the CPN-Maoist is all set to form a military structure , though its leaders have been saying resorting to armed struggle is not the party’s immediate plan.
The party has not formally announced the formation of such a structure, but sources said the wing is already ‘informally active’ on the ground. Party Secretary Netra Bikram Chand, who also heads the People’s Volunteer Bureau, the youth wing of the new Maoist party, has been asked to head the military structure .
The wing is assembling former PLA combatants who opted for voluntary retirement after last year’s peace deal and unverified fighters who were discharged from cantonments in 2010, sources said, adding that the party is trying to cash in on the former fighters’ deep resentment of the government and the UCPN (Maoist).
Government sources claimed the group has acquired at least 120 pieces of weapons registered in the name of the UCPN (Maoist). Around two dozen small arms earlier used in the security of UCPN-Maoist leaders, which has not been returned to the PM-ledSpecial Committee, is also expected to land with the group.
The military wing is functioning in coordination with the Chand-led volunteer’s bureau. Four former deputy commanders of the Maoist PLA, loyal to the new party, are in commanding positions at the regional and central levels, the sources said.
The ‘Eastern Division’ is headed by Udaya Bahadur Chalaune “Deepak” who was the deputy commander of the Shaktikhor-based Third Division PLA camp. The ‘division’ aims to reorganise ex-combatants from the Ilam-based First Division, Sindhuli-based Second Division and Chitwan-based third division camps and works under Commissar Khadga Bahadur Bishwakarma “Prakanda.”
The ‘Central Division’ is commanded by Ram Lal Rokka “Madan,” the former Division vice-commander of the Fifth Division based in Rolpa. Hitman Shakya “Suman” is the Commissar of the region and the division is tasked with bringing ex-combatants from the Fourth Division based in Nawlparasi and the Fifth Division.
Former Division vice-commander of the Sixth Division Nep Bahadur Bista “Bibek” is the commander of the ‘Western Division’ and  works under Commissar Kul Prasad KC “Sonam.” The ‘division’ will look after the Surkhet-based Sixth Division and the Kailali-based Seventh Division.
Another vice-commander of the sixth division, Durga Bahadur Chaudhary “Santosh,” has been made the deputy commander and the secretary of the headquarters. Almost all the commanders are office bearers of the Volunteer’s Bureau which the Mohan Baidya-led party formed following a split with the mother party in April.
While Chaluane is the head of the organisational department of the volunteer’s bureau, Bista is the head of the disciplinary department and Rokka is the head of the production department. Chaudhary is the Bardiya district in-charge of the CPN-Maoist .
Sources claimed Prime Minister Baburam Bhattarai and UCPN (Maoist) Chairman Pushpa Kamal Dahal are aware of the activities of the Baidhya-led party and its bid to revive the wartime military wing and are alarmed by it. The top brass of the Nepal Army and some members of the Special Committee are also aware of the reorganisation.
Asked to comment on the military structure , former division commander Chalaune claimed it was ‘just a rumour.’ He said former division vice-commanders have been asked to unite former fighters opting for retirement, hear their problems and try to find a solution.
“Each of the division vice-commanders were assigned to the eastern, central and western regions to help the fighters opting for retirement as there was no other mechanism after the party split,” he said, adding that former unverified PLA members and members of the YCL were being reorganised under the volunteer’s bureau.
Meanwhile, the Chand-led bureau is all set to adopt a new name, “Rastirya Yuwa Swayamsewak Bureau,” or National Youth Volunteers Bureau in its national conference scheduled to be held in Dhulikhel through October 10-12. Each of the district chapters have been asked to bring at least 500 youths for the conference, said a district-level leader.
The conference will announce campaigns for “protection of national sovereignty” and securing education, health and employment as fundamental rights in the new constitution and unveil programmes to ‘serve the people.’