October 04, 2012
Turning the Tables in Afghanistan — The Humiliation of Can-Do American Boys
by WILLIAM BLUM

In Afghanistan, the US military has tried training sessions, embedded cultural advisers, recommended reading lists, and even a video game designed to school American troops in local custom. But 11 years into the war, NATO troops and Afghan soldiers are still beset by a dangerous lack of cultural awareness, officials say, contributing to a string of attacks by Afghan police and soldiers against their military partners. Fifty-one coalition troops have been killed this year by their Afghan counterparts. While some insider attacks have been attributed to Taliban infiltrators, military officials say the majority stem from personal disputes and misunderstandings.

So the Afghan army is trying something new, most likely with American input: a guide to the strange ways of the American soldier. The goal is to convince Afghan troops that when their Western counterparts do something deeply insulting, it’s likely a product of cultural ignorance and not worthy of revenge. The pamphlet they’ve produced includes the following advice:

“Please do not get offended if you see a NATO member blowing his/her nose in front of you.”

“When Coalition members get excited, they may show their excitement by patting one another on the back or the behind. They may even do this to you if they are proud of the job you’ve done. Once again, they don’t mean to offend you.”

“When someone feels comfortable in your presence, they may even put their feet on their own desk while speaking with you. They are by no means trying to offend you. They simply don’t know or have forgotten the Afghan custom.” (Pointing the soles of one’s shoes at someone is considered a grievous insult in Afghanistan.)

The guide also warns Afghan soldiers that Western troops might wink at them or inquire about their female relatives or expose their private parts while showering — all inappropriate actions by Afghan standards. 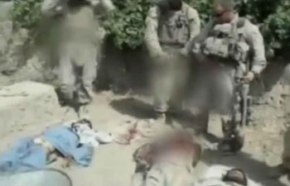 Early in 2012, a video showed US soldiers urinating on dead Taliban fighters 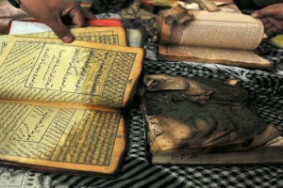 Demonstrators show copies of the Koran allegedly set alight by US soldiers serving with NATO forces in Afghanistan, during a protest at the gate of Bagram airbase on Feb. 21, 2012. (SHAH MARAI/AFP/Getty Images)

Hmmm. I wonder if the manual advises telling Afghan soldiers that urinating on dead Afghan bodies, cutting off fingers, and burning the Koran are all nothing more than good ol’ Yankee customs, meaning no offense of course.

And does it point out that no Afghan should be insulted by being tortured in an American military prison since the same is done at home to American prisoners.

Most importantly, the Afghan people must be made to understand that bombing them, invading them, and occupying them for 11 years are all for their own good. It’s called “freedom and democracy”.

I almost feel sorry for the American military in Afghanistan. They’re “can-do” Americans, accustomed to getting their way, habituated to thinking of themselves as the best, expecting the world to share that sentiment, and they’re frustrated as hell, unable to figure out “why they hate us”, why we can’t win them over, why we can’t at least wipe them out. Don’t they want freedom and democracy? … They’re can-do Americans, using good ol’ American know-how and Madison Avenue savvy, sales campaigns, public relations, advertising, selling the US brand, just like they do it back home; employing media experts, psychologists, even anthropologists … and nothing helps. And how can it if the product you’re selling is toxic, inherently, from birth, if you’re ruining your customers’ lives, with no regard for any kind of law or morality, health or environment. They’re can-do Americans, used to playing by the rules — theirs; and they’re frustrated as hell.

William Blum is the author of Killing Hope: U.S. Military and CIA Interventions Since World War II, Rogue State: a guide to the World’s Only Super Power and West-Bloc Dissident: a Cold War Political Memoir. He can be reached at: BBlum6@aol.com