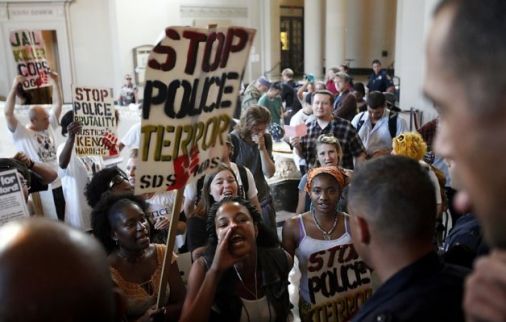 Protestors yell at the police blocking the entrance the city council meeting in Oakland, Calif., Tuesday, October 2, 2012. The family of Alan Blueford, who was killed in May by a police officer, marched to the meeting to demand the police finish their investigation of their son’s shooting. Photo: Sarah Rice, Special To The Chronicle / SF

Hundreds of protesters angry over a fatal shooting by an Oakland police officer in May arrived at the City Council meeting Tuesday night to find nearly half the public seating off-limits and other measures in place to limit the number of people who could fit into the chambers.

The reduced seating resulted in the council chamber doors being closed at 5:23 p.m., seven minutes before the meeting began. More than 100 people were locked out. Police officers barred the doors as protesters inside and outside the meeting room erupted.

“Let them in,” protesters shouted, at times drowning out the meeting.

City Administrator Deanna Santana ordered the changes after a Sept. 18 meeting was disrupted by the family and supporters of Alan Blueford, an 18-year-old high school senior shot to death May 6 after he allegedly pulled a gun while being chased by a police officer. Council members adjourned early that night after protesters shouted down their attempts to move through the agenda.

Santana held meetings with council President Larry Reid, police officials and city staffers over two weeks to come up with the new rules. The changes include eliminating seating in the chambers’ upstairs galleries and banning standing inside or just outside the City Hall meeting room. “No standing” signs, printed on paper, were posted on the chamber walls before Tuesday’s meeting. 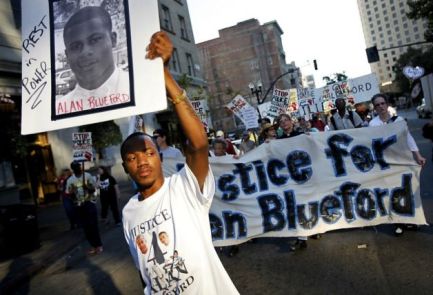 Jimmy Blueford, cousin of the slain Alan Blueford, marches through downtown Oakland to City Hall to protest at the city council meeting in Oakland, Calif., Tuesday, October 2, 2012. The family of Alan Blueford, who was killed in May by a police officer, are demanding the police finish their investigation of Blueford’s shooting. Photo: Sarah Rice, Special To The Chronicle / SF

Despite the new rules, the Blueford family and their supporters came out en masse Tuesday. As they did at the Sept. 18 meeting, Blueford’s relatives asked for the police incident report on the shooting, something the Police Department had refused to turn over.

“What mother wouldn’t want to know what happened to their baby?” said Jeralynn Blueford, 46, the dead man’s mother.

As family members spoke, supporters shouted, a violation of existing rules, and stood, violating the new rules. Finally, Reid left his seat on the dais, walked into the audience and handed the family his redacted copy of the police report.

Police Chief Howard Jordan released a statement during the meeting saying that he had given a redacted copy of the report to the family’s attorney, John Burris, earlier in the day and that the department would also post it online.

The meeting-rule changes that Santana ordered “are a clear example of the city’s repressive tactics to limit our access to our representatives in Oakland as well as our access to free speech in general,” said Mollie Costello, 40, a Piedmont resident and Blueford family supporter.

The Rev. Nichola Torbett, a Blueford family supporter who said she was with the Seminary of the Street, told the council, “If the people of Oakland are loud and disruptive, it’s because there’s something they want you to hear.”

Santana briefed the council about the rules behind closed doors before the panel met in its public session. She did not need the council’s agreement to implement the rules, and the council members did not vote on it.

The biggest change involves limiting public access to the third-floor council chambers. The galleries, which have 98 of the room’s 214 seats for the public, overlook the main floor of the chambers. Council members as well as city staff worried that raucous crowds might throw something down at them, Reid said.

However, Reid, who has been on the council for 16 years, said he could not recall an instance of someone throwing something from the gallery.

Protesters in galleries and on the main floor have disrupted meetings in similar ways, mainly by shouting. Because those in galleries seem no more disruptive, eliminating that seating was legally questionable, said Terry Francke, a prominent activist for open government.

“If the behavior of people in the gallery is no worse and no more obstructive or disruptive than those downstairs, then I don’t see any basis for exiling people from that area,” said Francke, founder of the nonprofit public-interest group Californians Aware.

Noting that Congress and the state Legislature both have gallery seating, Francke said, “Certainly, anxiety about misbehavior in those premises is no less than in the City Council chamber of Oakland.”

Under the new rules, people who do not get one of the 116 available seats can sit in an overflow room two floors below, where the proceedings are shown live on a video feed.

Oakland’s council meetings have become increasingly boisterous over the past two years, particularly on issues that involve police. The fatal shooting of Blueford, a Skyline High School senior, was the latest such issue to be pushed front and center at council meetings.

Police say multiple, independent witnesses report that Blueford pointed a gun at an officer while running away from an attempted police stop early May 6 in East Oakland. Police officials had rejected the family’s requests for the incident report, saying it was confidential because the investigation into the shooting was still under way.

However, Reid promised that the Blueford family would get the report during the September meeting. When it didn’t materialize, the crowd was infuriated.