[Another report on the further globalization of exploitation and resistance–class struggle. —  Frontlines ed.] 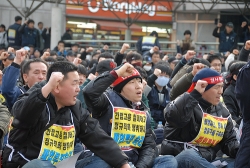 By Michelle Chen, In These Times

South Korea is sometimes touted as an exemplar of capitalist progress in Asia–a sophisticated economy with global brands and an educated populace (not to mention a stunning contrast to its miserable Communist analog to the north). But the lives of South Korean workers tell a different story. In recent months, they’ve been slammed by a much-maligned free trade deal, tussled with Hyundai in a bitter strike, and, according to an international assessment, become examples of how an economic boom can be a bust for labor.

According to a report by the International Trade Union Confederation (ITUC), published as part of the World Trade Organization’s periodic Trade Policy Review, Korean workers have faced major challenges in organizing independent unions, and women, migrants, and other marginal workers face widespread discrimination and exploitation.

Though unionization is generally legal, in practice, labor activities are regularly suppressed by employers, and independent organizing may be preempted by “management-controlled” or “paper” unions. Restrictions on public-sector union activities–in the name of protecting the public–parallel the limits on labor activism imposed on U.S. civil servants, according to the report:

[T]here are numerous categories of public officials who are still denied their trade union rights, including managers, human resources personnel, personnel dealing with trade unions or industrial relations, and special public servants such as military, police, fire-fighters, politically-appointed officials, and high level public officials. … The law also prohibits public sector unionists from engaging in “acts in contravention of their duties prescribed in other laws and regulations when doing union activities”. This very broadly worded provision leaves the door open for abuses.

For any issue that isn’t limited to the workplace, including broader economic justice demands, the strike is simply not a tool available to activist workers:

Strikes are illegal if they are not specifically called for labour conditions, such as wages, welfare and working hours. In addition, given the complicated legal procedures for organising a strike, collective actions on labour conditions often become “illegal” for breach of procedure. Unauthorised strikers often are punished with imprisonment for one year or/and heavy fines.

The weakness of organized labor is accompanied by structural inequalities in the workforce. Like many other “developed” economy, migrant workers have streamed in to fill low-paid, less desirable jobs, generating a two-tiered workforce that leaves the poorest workers socially and politically marginalized:

The government has paid insufficient attention to workplaces that employ foreign workers as only 5 to 6 per cent of roughly 75,000 such workplaces were inspected by labour inspectors. Reportedly, in such workplaces there are numerous cases of sexual harassment of migrant women workers and differences in pay.

Workers in textiles and manufacturing are especially vulnerable to exploitation through unfair wages or excessive hours, according to the report. Moreover, “Nearly 80 percent of migrant workers reported having experienced verbal abuse at their workplaces and over 25 percent reported physical abuse.”

The employment permit system constrains workers ability to negotiate work or leave an employer, so struggling migrants can easily slip into forced labor situations. The report notes that workers may have to choose “either [to] accept working conditions below national standards, or give up their legal employment and go on working as undocumented migrant workers with a particularly high risk of being exploited and abused.”

Women workers face a yawning wage gap. Despite legislation that aims to prohibit gender discrimination in the workplace, broader issues of discrimination, including the tracking of women into gendered low-wage sectors, and the lack of a guarantee of “equal pay for work of equal value.”

Permanent female employees earn about a third less than their male counterparts, and the gap is worse for “irregular” workers who lack job security.

Labor advocates point out that at some auto plants, the subcontracted workers and regular workers are virtually indistinguishable except for disparate treatment at work,

“They are working with the regular workers in that company… but the only difference is they are wearing different uniforms,” says Mikyung Ryu, international director of the Korea Confederation of Trade Unions. “But they have no right to bargain collectively or right to strike because the employer in the original company who are supervising and ordering to those in-house subcontracted workers are not considered as real employers in the law… The real employer ignores their demand for collective bargaining.” She adds that those second-tier workers cannot legally strike because technically they would be striking against a “third party,” not their official workplace.

This gauntlet of legal restrictions isn’t likely to become any more labor-friendly under the new Korea-U.S. free trade agreement, which threatens to further erode working conditions and deepen economic insecurity by deregulating key sectors like auto and farming, while expanding the political influence of multinationals in both countries.

South Korea’s so-called boom has come at great cost to its poor and precarious workers. While some might cheer the country’s postwar ascent as an Eastern vindication of Western capitalism, South Korea has in fact imported too many of its perils.