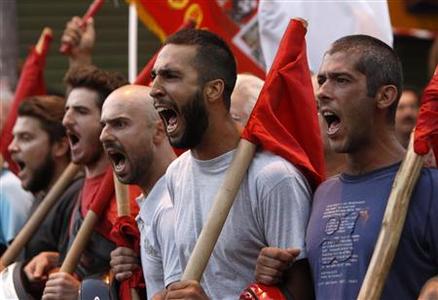 (Reuters) – Thousands of Greeks marched at an annual fair in Greece’s second-biggest city on Saturday to protest against a new round of wage and pension cuts demanded by international lenders in exchange for aid to stave off bankruptcy.

The demonstration by about 15,000 trade unionists and leftists was the first major protest against a nearly 12-billion-euro austerity package being readied by Prime Minister Antonis Samaras to appease EU and IMF inspectors who arrived in Athens on Friday to review Greece’s reform progress.

A few protesters burned European Union flags while others threw watermelons and peaches in support of struggling farmers, but the largely peaceful protests otherwise passed off without incident as 3,500 policemen looked on. 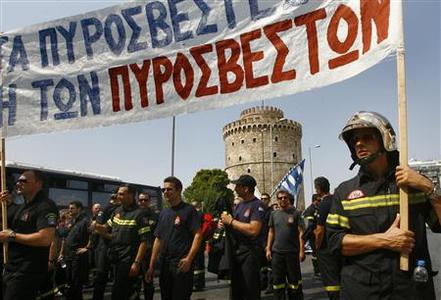 Greece is struggling through its worst post-war economic crisis that has left nearly one in four jobless, pushed up poverty levels and shuttered thousands of businesses.

In a break with tradition, Samaras made only a brief appearance to inaugurate the event and to defend the planned cuts instead of making the customary annual economic policy speech delivered by his predecessors.

“We are trying to minimize the pain from the cuts as much as possible but we have to make the cuts, because there is no other way,” Samaras told politicians and local officials.

“I am telling you the truth, there is no other way.”

“The prime minister came and left like a thief – perhaps he is ashamed,” said Tsipras, who took part in the rallies.

Samaras opposed Greece’s first bailout in 2010 but since taking power in June he has promised to push through another round of belt-tightening that a fatigued Greek public feels it cannot take anymore.

Samaras and Finance Minister Yannis Stournaras, a respected economist, have won cautious praise from European counterparts for refusing to back down on the cuts but face growing hostility at home as Greece’s economic slump deepens. 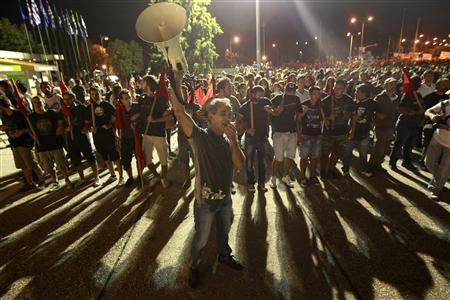 The government, which is hoping to win two more years to implement the cuts – which are slated for 2013 and 2014 – says Greece’s economy will contract by more than 7 percent this year.

A string of protests are expected in the coming days as the so-called troika of EU, International Monetary Fund and European Central Bank officials conclude a review that will determine whether Greece gets the next tranche of aid under its latest bailout and avoids a messy default.