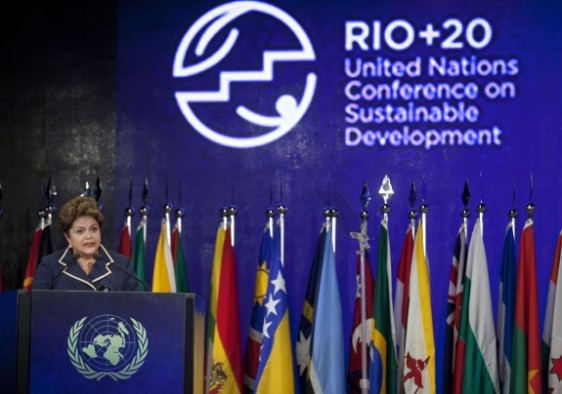 That result was hailed as a success by the 100 heads of state who attended. Given how environmental summits have failed in recent years as global economic turmoil squashes political will to take on climate and conservation issues, the mere fact of agreeing to talk again in the future constitutes victory.

Faced with the real prospect of complete failure, negotiators who struggled for months to hammer out a more ambitious final document ended up opting for the lowest common denominator. Just hours before the meeting opened Wednesday, they agreed on a proposal that makes virtually no progress beyond what was signed at the original 1992 Earth Summit, removing the kind of contentious proposals activists contend are required to avoid an environmental meltdown.

“We’ve sunk so low in our expectations that reaffirming what we did 20 years ago is now considered a success,” said Martin Khor, executive director of the Geneva-based South Centre and a member of the U.N. Committee on Development Policy.

Some of the biggest issues activists wanted to see in the document that didn’t make it in included a call to end subsidies for fossil fuels, language underscoring the reproductive rights of women, and some words on how nations might mutually agree to protect the high seas, areas that fall outside any national jurisdictions.

“We saw anything of value in the early text getting removed one by one. What is left is the clear sense that the future we want is not one our leaders can actually deliver,” said Greenpeace executive director Kumi Naidoo. “We now need to turn the anger people around the world are feeling into creative, thoughtful and meaningful action.”

On the “glass half full” side of things, while the effort to make progress on multilateral talks among the collective U.N. body were a disappointment, the big gathering produced nearly 700 promises and advances made by individual countries, companies and other organizations, in total worth about $500 billion if actually followed through

For instance, the U.S. agreed to partner with more than 400 companies, including Wal-Mart, Coca- Cola and Unilever, to support their efforts to eliminate deforestation from their supply chains by 2020.

Andrew Deutz, director of international government relations at the Nature Conservancy, pointed out that Indonesia, Australia and Colombia all made strong commitments to protecting oceans in their national waters, in part to ensure future food security.

“Monday morning, the challenge will be to go back home and hold governments and companies accountable for the commitments they made here and help them get things done,” he said.

Despite the shifting global economic order, with the rise of nations like Brazil and China and a host of other “middle-income” countries, critics said negotiators still argued along the lines of old “north-south” arguments that pit richer developed nations against developing nations.

The Group of 77 nations that represents the poorest on the globe maintained their demand that richer nations in Europe and the U.S. recognize their “historic debt” eating up a much greater amount of the globe’s resources since the industrial revolution began 250 years ago. They say rich nations should finance environmental improvements in the poorer nations, and also freely transfer technology that would help the developing nations use more renewable energy and build cleaner industrial sectors.

“Everything has been kicked down the lane a few years, we’ll have to wait to formalize sustainable development goals and make the transition to a green economy,” said Muhammed Chowdhury, a lead negotiator of Group of 77. “It’s not a good scenario.”

However, a U.S. delegate member said that countries can no longer debate issues with an eye on the past, that once poor nations are becoming rich, and that anybody looking for the Rio+20 summit to somehow reach a magical agreement and solve complicated environmental and development challenges would be sorely disappointed.

“I think the expectation that there is one document or one approach that can solve one of the major questions of our time — how do you maintain economic growth and protect the environment? — there’s not one paper that can do that,” said U.S. Assistant Secretary of State for Oceans and International Environmental and Scientific Affairs Dr. Kerri-Ann Jones.

“This is a process. We have to embrace it as a process, look at the positive things we have done, and keep working, as there is much more to do.”