Residents cleaned up after fires were set in 2010 by garment workers in Ashulia, Bangladesh, who were demanding higher wages.

DHAKA, Bangladesh — A labor activist who was arrested two years ago for his role in protests against low wages in Bangladesh’s garment industry was found murdered outside this city last week, labor rights advocates and the police said on Monday.

The killing of the activist, Aminul Islam, marks a morbid turn in the often tense relations between labor groups, on one side, and Bangladesh’s extensive garment industry, which makes clothes for Western companies like Walmart, Tommy Hilfiger and H&M. In 2010, Mr. Islam, a former textile factory worker, was arrested and, he and other labor activists said, was tortured by the police and intelligence services.

Mr. Islam, 40, was last seen alive on Wednesday near Ashulia, a garment-industry hub outside Dhaka. His tortured body was found on Thursday on the side of a road near a police station in Ghatail, 61 miles to the north, according to the police and labor activists.

Local police officials in Ghatail were unable to identify the body, so they photographed it and buried it. Later, Mr. Islam’s brother Rafiqul saw pictures of the body in a national newspaper and identified him. The body was exhumed Monday afternoon and reburied later in the day in Mr. Islam’s native village, Kaliakoir. He is survived by his wife, two sons and a daughter.

“We found several marks of wounds from his waist to his foot,” Rafiqul Islam said in a telephone interview. “His big toes and his ankles were smashed.” 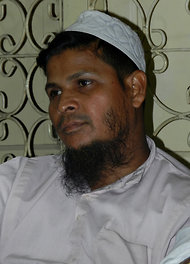 The garment industry is Bangladesh’s largest industrial employer, with 3.6 million workers. It has been gaining ground as a lower-cost alternative to the world’s leading garment exporter China, where wages have been rising sharply. Bangladesh is now the second-largest apparel exporting nation with about $18 billion worth of clothes shipped abroad last year.

The industry has periodically been shaken by protests and clashes between workers and the police. But activists say the murder of Mr. Islam would represent a disturbing escalation in violence.

“We are aware of no recent case of a trade unionist being murdered in Bangladesh,” said Scott Nova, executive director of the Worker Rights Consortium, a university-backed workplace monitoring group based in Washington. “There have been unionists killed in clashes with the police in the midst of protests, but no recent case of assassination. Thus, this represents a deterioration of an already grim labor rights situation in the country.”

Workers and labor activists have complained that many Bangladeshi factories pay wages that are difficult to live on, especially given the country’s 10 percent inflation rate. They have also criticized lax safety standards that have led to the deaths of dozens of workers in garment factory fires in recent years.

Still, in spite of the low wages, many workers, especially young women who make up 80 percent of employees, have flocked to garment factories, most of which are concentrated in and around Dhaka. They see the jobs as a way to supplement family incomes, many of which are still tied to subsistence farming in this country of 160 million.

Walmart and Tommy Hilfiger, in e-mail statements Monday, pledged their commitment to improving conditions for Bangladeshi workers. H&M did not respond to a request for comment.

Mr. Islam was an organizer for the Bangladesh Center for Worker Solidarity, a group that has argued for higher pay and better working conditions. The group helped lead protests in 2010 after policy makers did not increase minimum wages in the garment industry as much as some workers’ groups had wanted.

The government raised the minimum wage to 3,000 taka a month, about $36 at current exchange rates, from 1,662.50 taka — the first increase since 2006. Labor leaders like Mr. Islam had demanded an increase to at least 5,000 taka a month, a figure that many factory owners had said would put them out of business.

In early 2010, the country’s popular prime minister, Sheikh Hasina Wazed, expressed sympathy for garment factory workers. But after the government agreed to raise minimum wages to 3,000 taka, she said that her government would not tolerate any more protests.

Soon after, the police arrested Mr. Islam, along with more than a dozen other workers and activists. Mr. Islam and several of his associates were charged with instigating riots — accusations that he and the others denied. Criminal cases against him and two other senior labor leaders, Kalpona Akhter and Babul Akter, are pending.

On Monday, Mr. Akter, the president of the Bangladesh Garment and Industrial Workers Federation, said Mr. Islam’s killing was intended to scare other activists from protesting against the low wages and working conditions in the industry. But he and other activists said they would not back down and threatened to organize protests if the police did not arrest and prosecute the killers.

The Bangladesh Garment Manufacturers and Exporters Association, the industry’s main trade group, called for a full investigation into Mr. Islam’s death on Monday. In Washington, labor rights groups also called for an investigation and said the United States and multinational companies should put pressure on Bangladesh to conduct a thorough and impartial investigation.

The A.F.L.-C.I.O.’s Solidarity Center has protested what it says were the murders of six union activists in Guatemala — all involved in that country’s banana industry — over the past 15 months.