NPAs in Mindanao up 20 percent 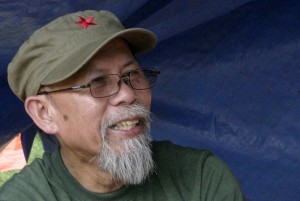 “We have formed additional platoons and increased our armed strength by almost 20 percent,” Madlos said in a statement sent to reporters on the eve of the 43rd founding anniversary of the armed wing of the Communist Party of the Philippines.

He claimed the guerilla fronts of the NPA have increased to 42, up from 32 fronts three years ago.

“We have maintained 42 guerrilla fronts island-wide and increased the number of company-sized fronts,” Madlos said.

The communist rebels claim they have five regional party committees in mainland Mindanao.

The NPA was founded on March 29, 1969 in Sta. Rita, Pampanga from remnants of the Hukbong Mapagpalaya ng Bayan (HMB), the armed wing of the old Partido Komunista ng Pilipinas (PKP).

From an undersized platoon of poorly equipped fighters with less than 25 rifles and handguns, the NPA has expanded throughout the archipelago and became a major threat to national security during the Marcos dictatorship.

It is believed that more than half of the total armed regulars of the NPA today are in Mindanao, also the seat of the Moro secessionist movement.

The Armed Forces of the Philippines (AFP) has placed the total strength of the NPA nationwide at a little over 4,000 fully armed regulars.

Early this year, AFP Chief of Staff Gen. Jessie Dellosa said the military is tightening its grip “against the NPA bandits with our focused combat operations.”

The AFP has been claiming that it has reduced the number of NPA regulars to its current strength from a high of 24,000 armed guerrillas during the height of the Marcos dictatorship.

Some estimates however said the armed strength of the NPAs in Mindanao has already equaled its 1980s level when the underground movement was at its peak.

The communist rebels shocked the military and the national government when they launched simultaneous attacks against three mining companies in Surigao del Norte in October last year.

More than 200 NPA rebels participated in the daring attacks which destroyed more than P500-million worth of equipment and facilities.

No one was hurt during the attacks but the NPA demonstrated its capacity to strike at will in areas where they maintain strongholds.

The northeastern side of Mindanao has long been known to host the Mindanao party leadership of the CPP-NPA.

The rebels are also active in central as well as southern Mindanao where they have repeatedly launched tactical offensives and harassment activities. The NPA rebels in these regions have attacked several big agribusiness corporations operating in areas where they are active.

In 2009, Madlos said they are preparing to bring their armed rebellion into a stalemate with the government in five years, a claim repeatedly downplayed and dismissed by the military. (Edwin Espejo / MindaNews contributor)