Police clamp down on rally 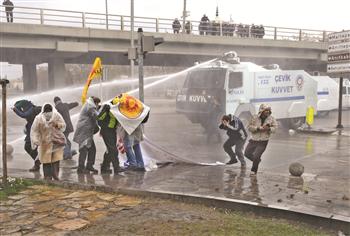 Police use water cannon to disperse a group of demonstrators in Ankara yesterday who gathered to protest on a call from the teachers’ union Eğitim-Sen to protest a government-sponsored education refom draft. The clashes erupted at Tandoğan Square, as police stopped a crowd of some 1,000 people from marching to Kızılay, where they had intended to merge with groups arriving from other parts of the city. DAILY NEWS photo, Selahattin SÖNMEZ

Riot police used pepper gas and water cannons yesterday to disperse hundreds of union members who gathered in Ankara to protest the government’s controversial education bill, defying harsh warnings from authorities that the demonstration was unauthorized.

The clashes erupted at Tandoğan Square, as police stopped a crowd of some 1,000 people from marching to Kızılay, where they had intended to merge with groups arriving from other parts of the city. Truncheon-wielding officers chased the protestors as some of them hurled stones at the police.
Using armored vehicles, police blocked streets leading to Kılzılay Square in the heart of the city early in the morning. The Ankara Governorship said the demonstration, called by the Confederation of Public Laborers Unions (KESK), was unlawful and thus “outside the guarantees of democracy.”

Several lawmakers from the Republican People’s Party (CHP) and the Peace and Democracy Party (BDP) joined a group of protestors who converged at Gazi Mustafa Kemal Boulevard, one of the main avenues leading to the square. The CHP’s Süleyman Çelebi phoned Interior Minister İdris Naim Şahin in a bid to negotiate permission for a press statement to be read at nearby Güven Park. KESK chairman Nami Özgen, however, vowed the demonstrators would spend the night in the streets and keep up the protest today. The tense standoff was still continuing when Hürriyet Daily News went to print.

It was the second day of street action, following a CHP rally the previous day, when Parliament began debating the bill, which has come in for criticism that it would undermine the schooling of girls, encourage child labor, and prematurely expose students to religious education.

“Shoulder to shoulder against fascism,” and “The day will come for the AKP to be brought to account,” the demonstrators chanted. “No to child labor,” “No to child brides” and “No to reactionary education,” their banners read.

“The government’s stance on the protests resembles the periods of martial rule in Turkey. The people’s freedom to travel is being violated,” the CHP’s Akif Hamzaçebi said.

Several thousand people had managed to make it to downtown Ankara after stringent security checks at the city’s entrances by the gendarmerie forces. Police stopped hundreds of others across Turkey who attempted to leave for the capital overnight, citing a circular from the Interior Ministry. Buses packed with activists were blocked from traveling to Ankara. On some occasions, drivers had their licenses confiscated and companies operating buses were fined on the grounds that their vehicles were not properly equipped.

Blocking their march with an armored vehicle, riot police used truncheons to disperse a crowd of some 500 union members in İzmir. About 90 others were detained in Adana. Groups that attempted to embark from Antalya, Manisa, Bursa, Aydın, and Konya were also stopped. In several cities, demonstrators refused to disperse, lit bonfires through the night, and chanted slogans.