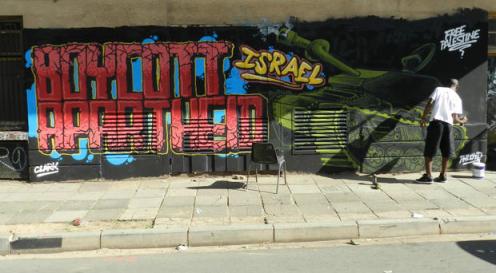 Huge billboards were put up to announce Israeli Apartheid Week. Durban-based GangsOfGraffiti inspired fellow street artists and graffiti writers to participate by creating works with “Free Palestine” as the theme. On walls in several cities, artwork appeared in support of IAW and boycott activism. In thirteen towns around the country, the film Roadmap to Apartheid was screened, including all major cities and in Soweto (“National film tour, 5-11 March 2012,” BDS South Africa ).

According to an article in The Jerusalem Post, the Israeli “Public Diplomacy Ministry” had sent a delegation to South Africa to “battle the apartheid label,” but Israel’s messengers did not succeed in changing the perception held by many South Africans that Israeli apartheid is similar to apartheid in South Africa (“Envoys to fight Israel Apartheid Week on campus,” 19 February 2012).

Fatima Gabru of the Palestine Solidarity Forum qualified the public relations exercise as “a stalling technique so that they [Israel] can continue with what they are doing: throwing Palestinians off their land, building walls, continuing human rights abuses” (“South Africa highlights Israeli apartheid,” Press TV, 9 March 2012).

The South African Council of Churches called on all South Africans and the church in South Africa to participate in Israeli Apartheid Week. In a press statement, SACC reminded church leaders that “Israel remained the single supporter of apartheid when the rest of the world implemented economic sanctions, boycotts and divestment to force change in South Africa.” The statement added that Israel continues to “share a similarity with the old South Africa in implementing apartheid where all non-Jews of Palestine are discriminated against, displaced of their land and homes, and subjected to refugee camps and a permanent state of violent military rule” (“Media statement,” 24 February 2012).

The South African Students Congress, the biggest student body in South Africa, supported Israeli Aapartheid Week because it firmly believes that “Israel is an apartheid state that daily tramples on the rights and dignity of Palestinians.” SASCO has officially endorsed the Palestinian call for boycott, divestment and sanctions (BDS) against Israel. “History has taught us that boycotts were instrumental in the defeat of the murderous and oppressive apartheid regime in South Africa and we believe that boycotting apartheid Israel is kernel to overthrowing the oppression of Palestinians,” wrote SASCO in a statement (“SASCO statement in support of Israeli Apartheid Week,” 6 March 2012).

SASCO branches participated in various activities and called on students not to accept scholarships and “opportunities” for cultural exchanges of young and promising black South Africans to study in Israel, just like students rejected the tactics of co-option by the South African apartheid regime.

On an Israeli Aapartheid Week speaking tour in Europe, SASCO member and BDS South Africa board member Mbuyiseni Ndlozi informed European audiences about the similarities between apartheid South Africa and Israel. He called on Palestine solidarity activists to apply the same BDS method until Israel respects the rights of the Palestinian people.

Reaching an old bastion of support for apartheid

He added: “In Port Elizabeth they packed a room of 300 people. The mayor of Port Elizabeth, Zanoxolo Wayile, attended the event. It is unheard of in the Eastern Cape. Students at Stellenbosch University held a rally on Palestine — it is a step forward.”

In the past, Stellenbosch University was a bastion of support for apartheid. The university’s vice-rector for research confirmed and acknowledged the university’s “complicity with the injustices of apartheid” last year, as reported in the aforementioned Jerusalem Post article.

During IAW at Stellenbosch, students organized a peace march and set up a checkpoint at the main gate of the faculty of theology. A copy of “The Bethlehem Call” in Afrikaans was handed over to the Beyers Naudé Centre. The Bethlehem Call is an urgent appeal to take act against Israeli apartheid and supports BDS activism.

The African National Congress played a leading role in overthrowing apartheid in South Africa. During this year’s Israeli Apartheid Week events, several ANC officials spoke out against the oppression of the Palestinian people.

Ebrahim Ebrahim, deputy minister of international relations and an ANC National Executive Committee member, spoke about “Palestine and South Africa: Partners in a struggle for a better world” at an event in Cape Town.

On the occasion of 100 years ANC, two ANC veterans participated in a panel discussion on the lessons that can be drawn from ANC’s history for South African solidarity with Palestinians resisting Israeli apartheid. Dennis Goldberg, veteran of the military wing of the ANC, and Ahmed Kathrada, former political prisoner who spent nearly thirty years in detention, contributed to the discussion.

Kathrada told the audience: “As a South African who has lived and suffered under apartheid and spent nearly thirty years of my adult life in its jails for resisting it, I can and do humbly claim to know something about the meaning of apartheid. You do not get to journey as far and as long as I have with the ANC and leaders such as Govan Mbeki, Walter Sisulu and Nelson Mandela and not recognize apartheid when you see and experience it.”

At the Russell Tribunal on Palestine meeting in Cape Town last year, Kathrada held the conviction that the Palestinians are “experiencing life akin to — and in many respects far worse — that what we had under apartheid in South Africa.” He called on the ANC to further its support to the Palestinian struggle for justice and self- determination.

“We are saying that if you [Israel] continue along the road of apartheid and we cannot stop you, at the very least you will do so without our consent, our investments, economic, cultural and political agreement.”

The Israeli Apartheid Week events in South Africa were part of a global effort to bring attention to Israel’s apartheid policies. Last year, Palestinian students called on students around the world to “put BDS at the forefront of your campaigns and join together for Israeli Apartheid Week, the pinnacle of action across universities worldwide” (“An open letter from Palestinian students to their peers in Europe,” BDS Movement, 21 October 2011).

Considering South Africa’s own experience of apartheid, it is no surprise that the country’s students are mobilizing against Israeli apartheid.

Adri Nieuwhof is a consultant and human rights advocate based in Switzerland.