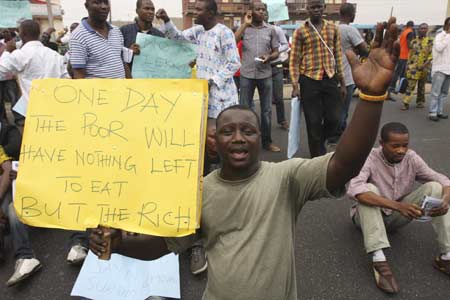 An unidentified man protests on a major road in commercial capital during a fuel subsidy protest in Lagos, Nigeria, Tuesday, Jan. 3. Angry mobs of protesters stopped gas station owners from selling fuel Tuesday while others lit a bonfire on a major highway in an attempt to thwart the government's removal of a cherished consumer subsidy that had kept gas affordable for more than two decades. (AP)

LAGOS, Nigeria — Protesters furious over spiraling gas prices set fires on an expressway Tuesday and at least one person was killed in the violent unrest after Nigeria’s government did away with a subsidy program that had kept fuel costs down for more than two decades.

One union leader described the federal government’s hugely unpopular move as “immoral and politically suicidal,” and urged Nigerians to resist “with everything they have.” But Tuesday’s protest showed that, once unleashed, the pent-up anger of the masses could be hard to curtail.

Angry crowds vandalized gas stations, intimidated owners into keeping their pumps unused and assaulted a soldier, showing how easily the fragile peace in Africa’s most populous nation could spiral into chaos.

One young man threw jerry-cans of engine oil off the racks at a gas station and tried to damage the station’s gas pumps. After union leader and chairman of the Joint Action Front, Dipo Fashina, asked the young man to stop vandalizing the station, he did, but later started one of the first bonfires of the protest in the middle of the highway.

Other activists marched to the protest songs of the late Afrobeat pioneer Fela Anikulapo-Kuti who fought against the injustices of military rule in Nigeria. His musician son, Seun, walked shirtless among the demonstrators, as his father used to, and also made attempts to keep things civil.

An Associated Press reporter at the scene in the megacity of Lagos said the protest had started with activists wielding signs and walking down a major expressway, but before long angry protesters lit bonfires and vandalized at least three gas stations. A wounded man later ran along the road shouting: “The police shot me, take me to hospital!”

In the central city of Ilorin, another violent protest where policemen fired tear gas left a man dead. The National Labor Congress accused the police in a statement Tuesday of shooting the “antifuel hike protester.”

However, Kwara state police spokesman Dabo Ezekiel denied the claim saying the man was stabbed by motorcycle-taxi drivers angered because they believed he was against their cause. Ezekiel could not say what triggered the attack.

The Nigerian government’s quiet announcement over the long holiday weekend that the popular subsidy was being ended triggered a wave of protests in Africa’s most populous nation of 160 million.

The government says it will use US$8 billion in savings to make much-needed infrastructure improvements, but previous attempts to even tamper with the subsidy have been met with nationwide protests.

On Tuesday, the rapidly growing group of Lagos protesters were going from gas station to station, telling owners not to sell gas at the spiked prices of about US$3.50 a gallon (94 cents per liter).

That is more than double what consumers paid only days ago for the fuel desperately needed to power the generators that keep many businesses running in Nigeria, where the national electricity supply can be described as sporadic at best.

President Goodluck Jonathan announced Monday evening that he has set up a committee to ensure that the savings from the subsidy’s end will be invested effectively to improve the quality of life of Nigerians.

Few, though, have seen any benefit from the country’s vast oil wealth over decades of production, and a culture of distrust of government permeates Nigerian society.

And the unrest over rising gas prices is only further adding to Nigeria’s security woes: Jonathan already declared a state of emergency over the weekend in parts of the country hit by a growing Islamic insurgency that is fueled in part by widespread poverty.