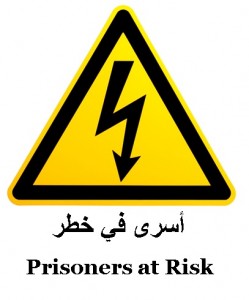 Israeli Occupying Forces (IOF) have arrested nearly 470 Palestinians since 18 October 2011 , when 477 Palestinian political prisoners were released in exchange for captured Israeli soldier Gilad Shalit as part of the first phase of the prisoner exchange deal concluded by the Israeli government and Hamas authorities. This wave of arrests reveals that the exchange deal has not deterred Israel‘s policy of detention of Palestinians; rather, Israeli prisons are being refilled with almost the exact number of Palestinians that were released in October. Even the released prisoners were not safe from harassment, as the IOF has regularly raided their homes, issued summons to meet with Israeli intelligence and re-arrested one individual.

The 470 Palestinians who were arrested between 18 October and 12 December include about 70 children and 11 women. The IOF continued to employ brutal methods of arrest, including the use of undercover Israeli forces, commonly known as musta’arabeen, who dress as Palestinian civilians in order to carry out ambushes and arrests of Palestinians from their homes and places of work. In many cases, joint army and intelligence raids occurred after midnight, where soldiers deliberately destroyed contents of the houses they were searching. Of the 70 children arrested during this period, the majority are from Shuafat camp in Jerusalem and Dheisheh camp in Bethlehem. In the past two weeks alone, 11 children were arrested in Shuafat and 10 in Dheisheh. Two of the 11 women arrested in during the past two months remain in detention. One of the released women is Irsa Salhab, a journalist who spent more than 20 days in Moskobiyyeh interrogation center. Six of the women were arrested during a demonstration outside Hasharon prison, where they were calling for the release of female prisoners not included in the first phase of the prisoner exchange. Three of these women were released shortly after their arrest, and three were sentenced to house arrest.

Political activists were especially targeted for arrest during this period. Approximately 150 arrests of alleged party members occurred, particularly including those whom the IOF claims are active in the Popular Front for the Liberation of Palestine (PFLP), some of whom received indictments issued against them, while others received administrative detention orders. The IOF has continued to arrest and renew administrative detention orders of members of the Palestinian Legislative Council (PLC). Two PLC members were arrested since 18 October, the administrative detention orders of 6 PLC members were renewed and one PLC member received a 30-year sentence. Furthermore, on 27 October, following a mass hunger strike protesting punitive measures against prisoners including the use of isolation, the Israeli Prison Service (IPS) renewed the isolation order for Ahmad Sa’adat for another year. At the beginning of December, Ahmad entered his 34th consecutive month in isolation.

The IOF also continued to carry out arrests against human rights defenders in order to further repress the popular resistance movement. During the past two months, arrests of protestors participating in peaceful demonstrations occurred in almost all of the villages with an active weekly demonstration. These arrests include at least 2 from Bil’in, 3 from Nabi Saleh, 17 from Beit Ummar, 3 from Al-Ma’asara, 1 from Kufr Qaddum and 2 from Al-Walajeh, with arrests in East Jerusalem and the South Hebron Hills as well. In addition to these arrests, the IOF used extreme violence to disperse demonstrations, resulting in the death of protestor Mustafa Tamimi, 28, on 10 December. Mustafa was fatally injured when hit by a teargas canister in the head fired at close range by an Israeli soldier on 9 December, during the weekly demonstration against the Israeli settlements and Annexation Wall in Nabi Saleh. The arrests of human rights defenders, use of violence against peaceful protestors and threats to family members of activists are in clear violation of Palestinians’ right to freedom of expression and assembly.

In light of this heightened wave of arrests, Addameer is concerned about what will happen after the conclusion of the second phase of the prisoner exchange deal. The IPS has announced that 550 prisoners will be released on Sunday 18 December. Addameer calls for the implementation of the rights of released prisoners and urges the international community, including the United Nations and European Union, to intervene rapidly to prevent Israel from its continued practice of brutal and arbitrary detention.