October 29 2011
Kolkata–The peace talks between the West Bengal government and CPI (Maoist) have come to an end with the Maoists calling them “misleading and senseless”.

A letter from CPI (Maoist) state secretary Akash to Sujato Bhadra, the leader of the six- member team of interlocutors, says the “peace talks” referred to by Mamata Banerjee government frequently did not make any sense. The state government should stop spreading the misleading news of peace talk being continued, it says. END_OF_DOCUMENT_TOKEN_TO_BE_REPLACED

After a particularly strong aftershock rattled Turkey, terrified Turkish prisoners rioted after authorities refused to let them out.

Prisoners in the eastern city of Van set bedding on fire and security forces surrounded the prison to prevent any further escape attempts.

The aftershock comes on the heels of the 7.2 magnitude earthquake that devastated Turkey on Sunday. In Sunday’s chaos, some prisoners had managed to escape. END_OF_DOCUMENT_TOKEN_TO_BE_REPLACED

[In the midst of ever-growing crisis, national celebrations are widely seen as bourgeois extravagances undeserving of popular support. — Frontlines ed.]

The protest in Thessaloniki was echoed at smaller parades across Greece, including in Athens where marchers held black ribbons. It showed the extent of anger at the higher taxes and wage cuts sought by the European Union and the International Monetary Fund in return for funds to avert a debt default.

The annual military parade in the northern city is one of the most symbolic events in Greece’s political calendar and commemorates the rejection of Italy’s ultimatum to surrender in 1940. It was the first time it had been cancelled. END_OF_DOCUMENT_TOKEN_TO_BE_REPLACED

[In a message that will resonate as battle cry throughout the world, Egyptians are moving beyond appeals for “debt relief” or “debt adjustments” or “refinancing” to declare “debt renunciation–we will not pay.”  In many countries around the world, the majority of the wealth created goes toward paying the debts made by oppressive regimes in corrupt deals with imperialist banks, while the people’s suffering grows.  “Debt renunciation” — now! — Frontlines ed.]

We Will Not Pay the Debts of Tyranny

“In the transition from an oligarchy or a tyranny to a democracy…persons refuse to fulfill their contracts or any other obligations, on the ground that the tyrant, and not the state, contracted them”—Aristotle.

Egypt owes about thirty-five billion USD (or 210 billion EGP) in foreign debts, which impose on us an annual burden of about eighteen billion EGP. These debts were accumulated under the previous regime in accordance with its political and economic priorities. We are paying off these debts from our own pockets instead of spending on healthcare, education or social services. A number of activists and civil society organizations inside and outside of Egypt have, therefore, designated 31 October the global day for Egyptian debt cancellation. This is a prelude to a popular campaign that aims to remove this burden off the shoulders of the Egyptian people, who were neither responsible in any way for the decision to take on these debts, nor were they ever consulted in how these funds were spent. END_OF_DOCUMENT_TOKEN_TO_BE_REPLACED 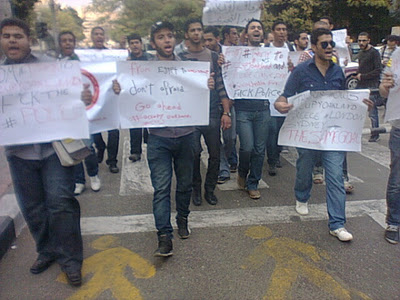 Occupy Oakland chanted, “We Are Tahrir Square”  — from Cairo came the message, “Cairo, Oakland, We Are One Hand.”
Friday, October 28, 2011

SINDHULI, OCT 25 –
In what could apparently be a sign of further crisis in the already troubled UCPN (Maoist), the party’s hard-line camp has intensified attacks on the establishment faction following the signing of the Bilateral Investment Promotion and Protection Agreement (BIPPA) with India.

Maoist Secretary CP Gajurel on Tuesday remarked that party Chairman Pushpa Kamal Dahal, and Vice-chairman and Prime Minister Baburam Bhattarai do not have the right to stay in the party.  Accusing them of giving up the revolutionary path, he demanded that the party bid them adieu. Speaking at a programme organised at Deurali of Sindhuli district, Gajurel alleged that the Maoist leadership has deviated from the revolutionary path though the leaders talk about revolution to retain their positions in the party.

Gajurel remarked that those who talk about peace by giving up revolution could not be Maoists in a true sense. END_OF_DOCUMENT_TOKEN_TO_BE_REPLACED