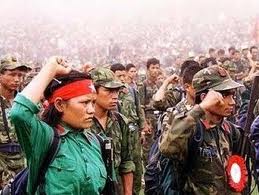 [The final dismantling of the (now disarmed) People’s Liberation Army–the main fighting force of the People’s War which was stopped in 2006–may be near, if the “establishment Maoists” and their partners in the government prevail over the revolutionary Maoists’ objections. — Frontlines ed.]

KATHMANDU, OCT 20 – Though they failed to sign a deal on integration despite marathon negotiations on Wednesday and Thursday, the three major parties have struck consensus on integrating former Maoist combatants by forming a new directorate with a non-combat mandate as proposed by the Nepal Army.

The Maoist leadership consented to a non-combat mandate only after non-Maoist parties agreed that the directorate, apart from its initial mandate, could also undertake other responsibilities given by the state in the future. The Maoists had earlier expressed reservations over the limited mandate that included national level infrastructure construction, forest security, industrial security and rescue and relief operations prescribed for the directorate.

“We have agreed to accept the directorate with the mandates proposed by the Nepal Army. We had an agreement that the combatants will get the responsibilities similar to those of a regular Army and can undertake other responsibilities prescribed by the state,” Maoist Special Committee member and Finance Minister Barsha Man Pun said. He said his party is mindful of the Army’s sensitivity and does not intend to erode the professionalism of the national army in pushing ahead with the integration process.

Pun, along with Nepali Congress General Secretary Krishna Prasad Sitaula and UML leader Bhim Rawal, worked throughout Wednesday night to prepare a draft of an agreement on contentious issues of the peace process. The proposal outlining recommendations on numbers, modality, rank determination, norms of integration and the rehabilitation package was briefed by Rawal to the top leaders of the three parties at Baluwatar on Thursday morning.

A UML leader who attending the three-party talks confirmed that the major parties had resolved the differences on the mandate of the directorate that would integrate the former combatants.

“The Maoist Chairman himself had consented to the mandates when the proposal was prepared by the Army, but he later backtracked following pressures from hardliners within his party,” the leader said.

The Mohan Baidya faction of the Maoist party is demanding that the directorate be given a complete military mandate and the same role as that of Army soldiers. The Army plans not to provide peacekeeping role and access to weapons to the newly integrated combatants.

Leaders, who attended Thursday’s talks said the parties have ‘almost settled’ their differences on numbers, modality and rehabilitation package, but are yet to find a meeting point on rank determination and norms of integration. Negotiators refused to divulge details of the resolved issues. Maoist Chairman Dahal himself urged party leaders not to publicise the contents unless there is an agreement on a package deal.

Talking to the Post before departing for New Delhi, Pun said the parties were close to consensus on integrating 6,000-7,000 combatants, offer rehabilitation package worth Rs 500,000 and voluntary retirement package worth Rs 700,000 for the combatants.

During talks held on Wednesday night, the Maoists urged the opposition leaders to provide a position of brigadier general as a ‘symbolic gesture’ to conclude the peace process. They also assured that the combatant, who will be conferred with the ‘symbolic rank’, will later voluntarily retire from the Army.

The NC is still reluctant to offer a rank senior to a lieutenant colonel and has proposed a ‘minus one approach’ for fixing the norms of integration. According to this, combatants should at least pass grade 10 to be qualified for the position of officer (which requires at least intermediate degree in the Army) and should pass grade seven to be selected a sepoy.

The NC had shared its draft with the Maoists on Sunday that proposed integration of 5,000 combatants and cash package between Rs 200,000 and Rs 400,000 for those opting for rehabilitation and a voluntary retirement package worth between Rs 300,000 and Rs 600,000.

The NC is learnt to have received the consent of the Army on its proposal before it was handed over to Maoist leaders.

“We felt that the Maoists are yet to complete discussions within their party,” Sitaula said. “If there is consensus, there will not be a partial deal but a package agreement on all the contentious issues.”

The NC team urged the party leadership to hold talks with the Maoist brass after its second layer leaders said they were not completely authorised to settle the contentious issues.