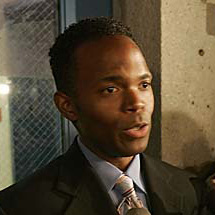 SAN FRANCISCO — The head of BART’s Board of Directors on Wednesday denounced an attempt by the transit agency’s chief spokesman to stock a news conference with riders critical of activists who have staged rush-hour protests in downtown San Francisco stations.

The spokesman, Linton Johnson, sent an e-mail to BART colleagues hours before a planned protest Aug. 11 in which he outlined a strategy to win over public opinion by showcasing “loyal riders” at a news conference. The riders were to say that protesters were putting their safety at risk.

Johnson planned for two sport utility vehicles to bring 10 to 15 riders to the news conference at the Powell Street Station in San Francisco, where they would read from scripts that the spokesman wrote. The scripted statement concluded, “We riders demand an immediate end to these illegal acts that make us late and put our lives at risk.”

The e-mail was first reported by the Bay Citizen online newspaper Tuesday.

On Wednesday, board President Bob Franklin said that Johnson’s plan had been unnecessary and that only one rider contacted by BART had actually appeared at the news conference. The Chronicle did not quote the man, and Franklin said other news outlets had not, either.

“It was inappropriate for him, or anyone, to provide talking points to passengers,” Franklin said of Johnson. “It wasn’t genuine, and there was no need for it. BART doesn’t have to do that.”

Although the SUVs were never used to shuttle riders to the news conference, renting the vehicles for four hours still cost BART $872, Franklin said.

Johnson, a former TV news reporter, has been out on personal leave since Aug. 22. Attempts to reach him Wednesday were unsuccessful.

Franklin said he was not aware of any other attempts by the BART spokesman to steer riders toward news cameras and coach them on what to say.

“I think the intent was to show some context,” Franklin said. “There were a couple dozen protesters and 350,000 riders. Some are not good in front of the camera, so I think he was trying to provide some focus. … But it’s not genuine, and we don’t think it’s a good idea.”

Johnson has been at the center of several controversies since the near-weekly protests began in July, following the fatal shooting of a 45-year-old transient, Charles Blair Hill, by a BART police officer. BART police say Hill was winding up to throw a knife at an officer at the Civic Center Station when the officer shot him.

BART called the Aug. 11 news conference in reaction to a planned protest that did not happen. BART cut off wireless service in the downtown stations that evening to prevent activists from coordinating their movements, an idea that Johnson later said had been his.

Free-speech activists denounced the action, and BART has not repeated it at subsequent protests.

Franklin said Johnson had also erred when he defended the idea by declaring that riders’ free-speech rights end at the fare gates.

“I think at the time, Linton began taking some of this personally,” Franklin said. “He made a series of errors in a limited amount of time.”

Franklin said Johnson’s bosses would discuss the e-mail after the spokesman returns from his leave Monday.

“We can have a proactive approach not to do this again,” Franklin said – “acknowledging it and taking corrective steps, and moving on.”