[The New York Times, the leading imperialist media organizer, reports the events in London and the crisis in Britain in terms which express contempt for the masses in rebellion, and calculations of where this is all going–in terms of the sharpening of battlefronts for the class war which is leaping out of the shadows of “normal” life.   All this from the viewpoint of the defenders, and managers, of the existing system. –Frontlines ed.] 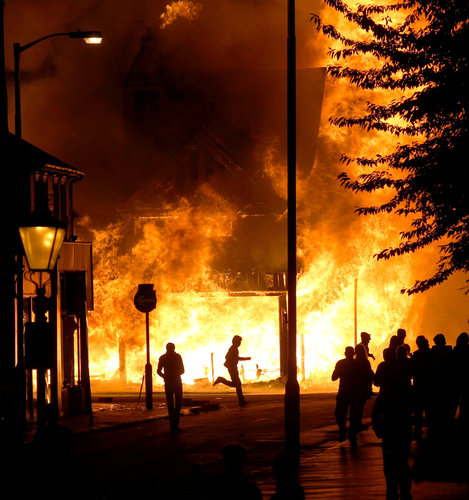 Sang Tan/Associated Press A shop was set on fire Monday in Croydon, south London. The home secretary said there had been hundreds of arrests.

LONDON — The rioting and looting that convulsed poorer sections of London over the weekend spread Monday to at least eight new districts in the metropolitan area and broke out for the first time in Britain’s second-largest city, Birmingham, in what was developing into the worst outbreak of social unrest in Britain in 25 years.

By early Tuesday, unrest was also reported by the police in two other major cities, Liverpool and Bristol, and an enormous fire was consuming a large warehouse in the Enfield section of London.

Prime Minister David Cameron, apparently caught off guard while on vacation with his family in Tuscany, reversed an earlier decision not to cut short his holiday in the face of plunging world financial markets and boarded a plane for home to lead a cabinet-level meeting on Tuesday to deal with the turmoil.

For a society already under severe economic strain, the rioting raised new questions about the political sustainability of the Cameron government’s spending cuts, particularly the deep cutbacks in social programs. These have hit the country’s poor especially hard, including large numbers of the minority youths who have been at the forefront of the unrest.

Together with the inevitable pressures to restore some of the spending cuts, Mr. Cameron and his colleagues have to confront the dark shadow that the rioting has cast on plans for the 2012 Summer Olympic Games. That $15 billion extravaganza will have its centerpiece in a sprawling vista of new stadiums and an athletes’ village that lie only miles from the neighborhoods where much of the violence in the last three days has taken place. With the Games set to begin in barely 12 months, Britain will have to satisfy Olympic officials that there is no major risk of the Games being disrupted, or ruined, by a replay of the rioting. 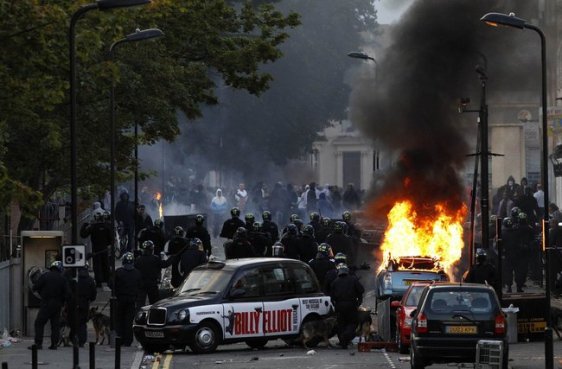 Luke MacGregor/Reuters Police officers in riot gear tried to block a road near a burning car in the northern district of Hackney, in London, where rioting continued for a third night.

Beyond these challenges is the crisis that has enveloped London’s Metropolitan Police, popularly known as Scotland Yard, on which security for the Olympics, and the immediate hopes of quelling the rioting, depend.

Even before the outbreak of violence, the police have been deeply demoralized by the government’s plan to cut about 9,000 of about 35,000 officers and by allegations that it badly mishandled protests against the government’s austerity program last winter and failed to properly investigate the phone-hacking scandal that has dominated the headlines here for much of the summer. The force now faces widespread allegations that it failed to act quickly and forcefully enough to quell the rioting at its outset over the weekend.

With huge fires burning into the night in several of the neighborhoods overrun by the rioters, Home Secretary Theresa May said she had issued instructions that officers do everything possible to restore order and arrest the principal culprits in the disorder. Striking a note that was common among community organizers in the neighborhoods where rioting has occurred, Ms. May said that social deprivation was no defense.

“There is no excuse for violence, no excuse for looting, no excuse for thuggery, and those who are responsible must know that they will be brought to justice,” she said. “I think this is about sheer criminality.”

Despite an additional build-up in the number of riot police officers, many of them rushed to London from areas around the country, gangs of hooded young people appeared to be outmaneuvering the police for the third successive night. Communicating via BlackBerry instant-message technology that the police have struggled to monitor, as well as by social networking sites like Facebook and Twitter, they repeatedly signaled fresh target areas to those caught up in the mayhem.

They coupled their grasp of digital technology with the ability to race through London’s clogged traffic on bicycles and mopeds, creating what amounted to flying squads that switched from one scene to another in the London districts of Hackney, Lewisham, Clapham, Peckham, Croydon, Woolwich and Enfield, among others — and even, late on Monday night, at least minor outbreaks in the mainly upscale neighborhoods of Notting Hill and Camden.

The mayhem also spread for the first time beyond London to Birmingham, 110 miles northwest of London, as well as to Bristol and Liverpool. The police said that at least 200 hooded youths massed near a shopping center in the middle of Birmingham, smashed shop and car windows, terrorized bus passengers and looted stores. The police said they had thrown a half-mile cordon around the city center and had arrested at least 100 people, many of them teenagers.

In London, Ms. May, the home secretary, said there had been more than 200 arrests before nightfall, and the figure appeared to have risen sharply as the unrest metastasized in the evening hours, running broadly from north to south over a distance of about 15 miles on either side of the Thames.

Nothing remotely like it had been seen in London since 1985, when another eruption that occurred mainly among black youths led to violent running battles with the police. Known as the Broadwater Farm riots for the housing project where it began, the turmoil took place in the Tottenham district, where the current unrest started on Saturday. That grew from a protest outside a police station about the shooting last week by the police of Mark Duggan, 29, who lived in the housing project.

Some large buildings burned deep into the night, as the police and television network helicopters circled overhead. Some of the rioters could be seen using BlackBerrys as they broke away from police cordons, slipping down side streets and opening new battlefronts. Hundreds of police officers followed them from riot scene to riot scene.

In some neighborhoods, officers appeared to allow the looting to go unchecked, concentrating instead on stopping new outbreaks of violence elsewhere.

At one point, two priests entered the Pembury Road housing project in Hackney, the scene of some of the worst violence, to gain permission from rioters to allow an ambulance to take an injured elderly woman to safety. In Camden Town, a group of about 20 masked youths broke into a cellphone shop run by one of Britain’s biggest operators, O2. Chanting “O2, O2, O2,” they looted with extraordinary speed, to the sound of wailing alarms. Tim Godwin, the acting commissioner of Scotland Yard, appealed to people to help identify the rioters. He conceded, obliquely, that the unrest was at least partly rooted in social deprivation, saying there were “conversations to be had” about grievances in London’s most deprived neighborhoods, but said that could come only after the unrest had ended.