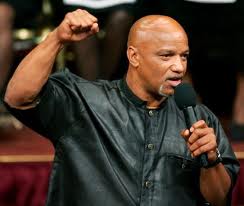 Geronimo ji jaga (Pratt), a former Black Panther whose 1972 murder conviction was overturned after he spent 27 years behind bars for a crime he did not commit, has died at 63 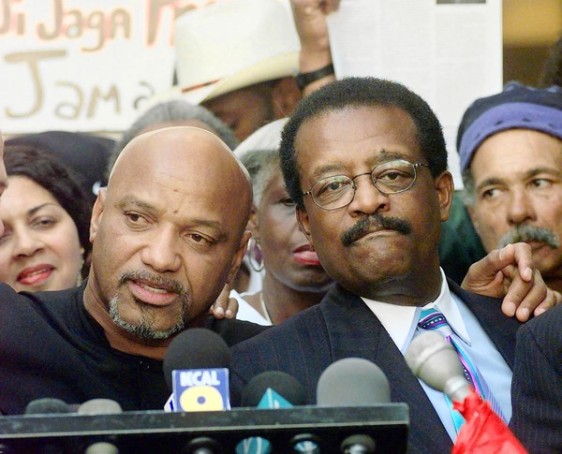 Elmer "Geronimo" Pratt, left, with attorney Johnnie Cochran in 1998. Pratt, a former leader of the Black Panther Party, spent 27 years behind bars for a crime he did not commit.

June 3, 2011
Elmer G. “Geronimo” Pratt, a former Los Angeles Black Panther Party leader whose 1972 murder conviction was overturned after he spent 27 years in prison for a crime he said he did not commit, has died. He was 63.Pratt, whose case became for many a symbol of racial injustices during the turbulent 1960s, died Thursday at his home in a small village in Tanzania, said his sister Virginia. The cause was not given. 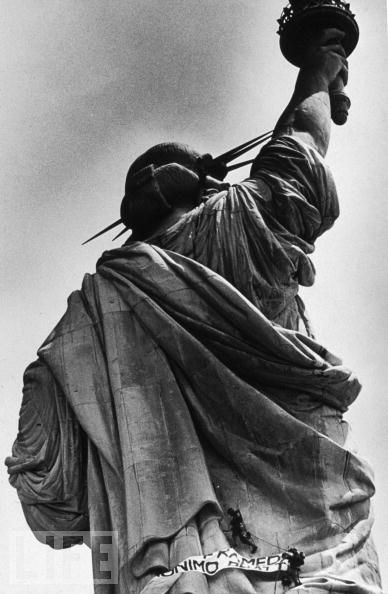 May, 1980: Edwin Drummond and Stephen Rutherford climb a third of the way up the back of the Statue of Liberty with a protest banner reading, "Liberty Was Framed - Free Geronimo Pratt." Pratt, a former Black Panther, served 27 years in jail before his conviction in a 1968 California murder case was vacated. He was released in 1997.

Pratt’s case became a cause celebre for a range of supporters, including elected officials, activists, Amnesty International, clergy and celebrities who believed he was framed by Los Angeles police and the FBI because he was African American and a member of the radical Black Panthers. Pratt maintained that the FBI knew he was innocent because the agency had him under surveillance in Oakland when the slaying was committed in Santa Monica.”Geronimo was a powerful leader,” Stuart Hanlon, Pratt’s longtime San Francisco attorney, told The Times. “For that reason he was targeted.”Pratt was arrested in 1970 and two years later convicted and sentenced to life in prison for the 1968 fatal shooting of Caroline Olsen and the serious wounding of her husband, Kenneth, in a robbery that netted $18. The case was overturned in 1997 by an Orange County Superior Courtjudge who ruled that prosecutors at Pratt’s murder trial had concealed evidence that could have led to his acquittal.A federal judge later approved a $4.5 million settlement in Pratt’s false-imprisonment and civil rights lawsuit.

Pratt, who also went by Geronimo Ji Jaga Pratt, was born on Sept. 13, 1947, in Morgan City, La., a small town about two hours from New Orleans. The youngest of seven children, Pratt was raised as a Roman Catholic by his mother and his father, who operated a small scrap-metal business.

Growing up in the segregated South amid a tight-knit black community had a profound effect on Pratt, he later told interviewers.

“The situation was pretty racist, on the one hand,” he said in an interview with Race and Class Magazine. “On the other, it was full of integrity and dignity and the pride of being part of this community … the values, the work ethic, very respectful to everyone.”

Pratt volunteered to join the Army and served with the 82nd Airborne in Vietnam, where he was awarded two Bronze Stars, a Silver Star and two Purple Hearts. After he was discharged, Pratt moved to Los Angeles in 1968 and enrolled at UCLA. While attending classes, he met Alprentice “Bunchy” Carter, a Louisiana native and an early member of the Black Panther Party who recruited him to the cause and gave him the “Geronimo” nickname.

Pratt was convicted in the 1968 shooting after compelling testimony by Julius C. (Julio) Butler, a one-time Black Panther associate who told jurors that Pratt discussed “the mission” with him before the attack and admitted later that evening that he had shot the couple. Government records later showed that Butler was an FBI informant at the time. Butler denied being an informant.

Nonetheless, three jurors who convicted Pratt said they would have held out for acquittal if they had known of Butler’s relationship with the FBI.

For more than two decades, Pratt’s legal team — led by Hanlon and Los Angeles attorney Johnnie L. Cochran Jr. — struggled to win Pratt’s freedom. Cochran, who was a key member of O.J. Simpson‘s “Dream Team” before his death in 2005, said Pratt’s case was the most important of his career.

After he was released from Mule Creek State Prison in Amador County, Pratt held no animosity toward authorities who had imprisoned him, Hanlon said. “He was at peace with himself,” the attorney said.

Pratt is survived by a daughter, three sons, two sisters and two brothers.