Delhi has been unwilling to solve this tragic and brutal conflict, and has scuttled any attempt at meaningful discourse 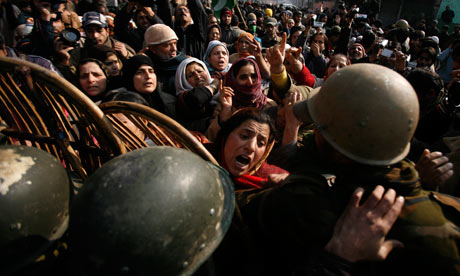 Kashmiri women confront Indian soliders during a protest over the killing of a student in Srinagar. Photograph: Farooq Khan/EPA

Many years ago, I met two journalists from India in London and we found ourselves talking about Kashmir. Mostly, they listened patiently to my impassioned tale of what goes on, but the moment I touched upon the brutal counter-insurgency methods employed by the Indian security apparatus in the disputed territory – among them notorious “catch-and-kill” operations to execute suspected militants – they looked incredulous, made a quick excuse and left. Later, I learned that at least one of them believed that Kashmiris liked to exaggerate the excesses of the Indian armed forces.

In the reaction of those two men, I had witnessed the frightening success of India’s policy of denial and misrepresentation on Kashmir. India’s decision to censor the Economist last week, following the publication of a map that shows the disputed borders of Kashmir, represents two unsurprising but ominous things: that the country’s age-old intransigence over Kashmir still runs deep; and its willingness to curb freedom of speech over what it sees as sensitive matters of national interest. On Kashmir India continues to behave as a police state, not as the champion of democracy and freedom that it intends to be.

There is nothing astonishing or new in this. For decades, India has not only been unwilling to solve one of the world’s most tragic conflicts but has scuttled any attempt at meaningful discourse on the issue, both internationally and within the country. The ultimately pointless attempt at censorship by asking the magazine to paste stickers on a representation of areas controlled by India, Pakistan and China is, sadly, in line with its inflexible and deeply flawed Kashmir policy. To come good on its insistence that “Kashmir is an integral part of India” – and it does lash out at any attempt to suggest otherwise – it maintains the world’s largest military presence in a single region, to suppress the revolt that erupted against its rule in 1989. An uprising that continues in the form of a civilian resistance.

Last year, in what we now remember as Kashmir’s bloody summer, its paramilitaries and police killed more than a hundred protesters, most of them young men and schoolchildren. Among those killed was Sameer Rah, a nine-year-old boy from Srinagar, who was bludgeoned to death and his body dumped by a kerb. The image of his bruised, purple body is now permanently etched in the collective consciousness of Kashmiris at home and across the world, and may haunt India’s political and intellectual elites for a long time. In response to this brutalisation of a people – the Kashmir valley remained in virtual siege for weeks – a cogent narrative of what I call “new dissent” began to evolve in Kashmir and India, scripted by Kashmiris themselves and by some of India’s bravest public intellectuals, writers and journalists.

However, both the central government and its clients in the state tried everything to suppress this new wave of dissent; they introduced draconian measures to silence the voice of Kashmiris and their supporters in Delhi. TV channels were forced off air, newspapers were not allowed to print for weeks, text messaging was banned, and later on, in India’s capital, a lower court even charged Arundhati Roy with sedition. But the urge to report to the world what was unfolding in Kashmir was ultimately unstoppable. Kashmiri youth turned to social media to get the word out.

And it did get out, aided by India’s fascinatingly diverse intelligentsia and those sections of the Indian media that have of late started to look at Kashmir with new understanding and empathy, and not through the disingenuous prism of national interest.

The Economist’s map on Kashmir – which must have received many more page views than had it not been declared contraband – contains nothing that contests historical facts or misrepresents ground reality. Essentially, the magazine has produced a graphical account of geopolitical status in the region – namely, Kashmir is a disputed territory, with India and Pakistan as the main contestants, but Kashmiris as the central party as it is their future that has been a point of dispute. A dispute that the UN recognises as such in its charter of 1948 – and in its maps. I have found maps produced by the UN to be the most accurate and impartial.

When, and why, do states censor maps? Mostly when the operating principle seems to be denial and obfuscation. For years, the Indian state has attempted to delegitimise people’s aspirations in Kashmir, either by raising the bogey of Islamism or lumping together the challenge to its authority in Kashmir with the US-led war on terror. For most of the 1990s and the early years of the new millennium it succeeded. Ironically, as a consequence of the emergence of “new India” and the burgeoning of the country’s affluent middle classes, the Economist – a magazine previously considered the preserve of business elites – is now selling more copies in India. It is seen as influential, and capable of altering opinion – hence the kneejerk reaction to the map. The Indian government is doing a huge disservice to its democratic credentials by trying to confiscate the truth about one of the world’s most tragic, intractable and dangerous conflicts.