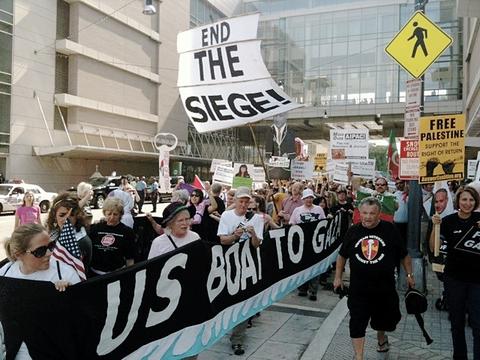 Move Over AIPAC activists demonstrate outside the AIPAC 2011 Policy Conference which featured President Obama as a keynote speaker.

by Ali Abunimah on Sun, 05/22/2011Following his speech on Thursday night, and his meeting with Israeli Prime Minister Benjamin Netanyahu on Friday, US President Barack Obama spoke to the 2011 Policy Conference of AIPAC, the influential Israel lobby today.

Obama’s speech today contains a number of interesting elements of the United States’ and the president’s view: a hard-headed realism about the deep trouble Israel is in and an equally hard-headed determination to keep doing the same things that will make Israel’s prospects poorer over the long-run while prolonging the suffering for Palestinians. These contradictory impulses, will only heighten conflict and do little to advance the president’s stated goal: peace.

Obama also addressed the fake controversy following Netanyahu’s public rejection on Friday of the president’s reference to a peace “based on the 1967 lines.”

Here are some of the key points of Obama’s speech with analysis.

Here are the facts we all must confront. First, the number of Palestinians living west of the Jordan River is growing rapidly and fundamentally reshaping the demographic realities of both Israel and the Palestinian territories. This will make it harder and harder – without a peace deal – to maintain Israel as both a Jewish state and a democratic state.

Obama is simply pointing out the reality that Palestinians if not already, will soon be, the majority population in historic Palestine (Israel, the West Bank and Gaza Strip combined).

Yet Obama does not call for a morally correct solution: equal rights for all who live within the territory and all who have been unjustly excluded from it on the basis of ethnicity, according to basic democratic principles.

Instead, the president exhorts Israel to rush to create a truncated Palestinian statelet in the false belief that a Palestinian mini-state on a fraction of historic Palestine can fulfill the rights of some 11 million Palestinians denied their human rights, and right to self-determination for decades.

Obama’s use of demographic scare-mongering indicates an acceptance of the fundamentally racist view that the mere existence of certain categories of humans (in this case non-Jewish Palestinians) in a country is unacceptable and dangerous – even if they or their parents or grandparents were born in that country. Palestinians “west of the Jordan River” are not interlopers or intruders. They are indigenous people of the country. Instead of searching for ways for Israel to escape them by gerrymandering a bantustan, Obama should be calling for full and equal rights, nothing less.

Obama’s failure to call on Israel to respect the full and equal rights of the 1.4 million Palestinian citizens of Israel, will also be taken as a signal by Israel that the president is fine with the growing raft of racist legislation directed against this indigenous community.

Obama’s use of the demographic scare-tactic would have had its equivalent during the existence of apartheid South Africa in a US president urging the defunct racist regime in Pretoria to rush to create more bantustans so that South Africa could remain a ‘white and democratic state.’

When Obama claims, as peace process insiders often do, that the vision he laid out for “peace” is “is a well known formula to all who have worked on this issue for a generation” it is important to remember that these are “formulas” made by power players without reference to millions of Palestinians – especially refugees – who have never been consulted and who certainly don’t consider their own mere existence a threat to anyone’s “democracy.”

Military force is not enough

Obama is acknowledging that military superiority is insufficient to maintain Israel in the absence of political legitimacy. But again there is a contradictory impulse: the unconditional US commitment to give Israel any and all technology and military means allows Israel to delude itself that it can rely forever on force of arms in lieu of a peace agreement.

…a new generation of Arabs is reshaping the region. A just and lasting peace can no longer be forged with one or two Arab leaders. Going forward, millions of Arab citizens have to see that peace is possible for that peace to be sustained.

For decades the whole concept of the “peace process” was based on Israel signing treaties with unelected Arab leaders in spite of their publics’ deep opposition to such agreements that did nothing to restore the rights of Palestinians and only freed Israel’s hands to attack and occupy more. The 1979 Israel-Egypt and 1994 Israel-Jordan peace treaties are prime examples, and for many years the US sought a similar deal between Israel and Syria.

Obama is acknowledging that if the United States is unsuccessful in imposing new obedient client leaders on Arab states (or maintaining the ones it still supports), Israel would actually have to be acceptable to Arab publics and electorates. This is true enough, but again, his solution: a truncated Palestinian bantustan is hardly a sufficient answer to the challenge.

Isolation of Israel will be unstoppable even with US support

Several times in his speech Obama vowed the United States would stand up against the “delegitimization” of Israel. That is the term Israel and its supporters have applied to the global Palestine solidarity movement, calling for equal rights, especially the boycott, divestment and sanctions (BDS) movement.

Obama also referred specifically to the Palestinian Authority effort to seek UN recognition for a Palestinian state this September. Despite these US commitments, Obama observed:

This seems to be a clear warning to Israel and it should serve as an encouragement to Palestine solidarity activists everywhere. However, the president offered no sense that under his leadership the United States will take any action other than presidential speeches that have any “prospect of success.”

Perhaps the centerpiece of Obama’s speech today was when he addressed the fake controversy over his mention of the 1967 lines on Thursday. Today, Obama said:

By definition, it means that the parties themselves – Israelis and Palestinians – will negotiate a border that is different than the one that existed on June 4, 1967. It is a well known formula to all who have worked on this issue for a generation. It allows the parties themselves to account for the changes that have taken place over the last forty-four years, including the new demographic realities on the ground and the needs of both sides.

Here Obama appears to be deliberately returning to a formulation that his predecessor President George W. Bush used in his famous April 2004 letter to then Israeli Prime Minister Ariel Sharon. In the letter, which assured Israel of US support for annexation of West Bank settlements built in violation of international law, Bush wrote:

As part of a final peace settlement, Israel must have secure and recognized borders, which should emerge from negotiations between the parties in accordance with UNSC Resolutions 242 and 338. In light of new realities on the ground, including already existing major Israeli populations centers, it is unrealistic to expect that the outcome of final status negotiations will be a full and complete return to the armistice lines of 1949, and all previous efforts to negotiate a two-state solution have reached the same conclusion.

It is realistic to expect that any final status agreement will only be achieved on the basis of mutually agreed changes that reflect these realities.

(Note: the 1949 armistice line is the June 1967 line – i.e. the line that existed between the 1949 Rhodes Armistice agreement and the Israeli surprise attack that launched the Six-Day War on 4 June 1967).

As the language I’ve highlighted shows, Obama is reaffirming the essential points made by Bush: the 1967 line is infinitely malleable (to suit Israel) and thus the reference to it does not in any way preclude massive Israeli annexations to the east of it.

Second, any border must be by “mutual agreement.” Given the hopefully lop-sided balance of power, and Obama’s affirmation that the US will steadfastly continue to put no pressure on Israel, this means in effect that the commitment to the 1967 line is devoid of content. Despite the fireworks there is no practical difference between Obama and Netanyahu.

…the recent agreement between Fatah and Hamas poses an enormous obstacle to peace. No country can be expected to negotiate with a terrorist organization sworn to its destruction. We will continue to demand that Hamas accept the basic responsibilities of peace: recognizing Israel’s right to exist, rejecting violence, and adhering to all existing agreements.

Obama handed Netanyahu an excuse to continue to avoid the negotiations Obama claims are urgent, until Hamas learns –politically speaking – to sing HaTikva and dance a hora. Obama has never called on Israel to recognize fundamental Palestinian rights as a precondition for negotiations, and as we know has abandoned any effort to get Israel to adhere to international law or signed agreements by stopping settlement construction.

Obama could have learned something from President Clinton’s much more deft approach to the Irish peace process, but instead he chose to pander to Israel’s obstructionist preconditions diminishing the prospects for negotiations even further.

In his speech on Thursday, Obama mentioned in passing that “Israeli settlement activity continues” in the occupied West Bank. But he pointedly did not make any call on Israel to stop building settlements. In today’s speech he didn’t mention the settlements at all.

Thus while exhorting Israel to rush toward a “two-state solution” in order to save itself from the terrifying threat of Palestinian infants, Obama has given up completely on any effort to confront the main obstacle to his preferred outcome: Israel’s accelerated colonization of the little remaining land.

Perhaps this more than anything sums up the competing impulses evident in Obama’s speech: an urgency to address an an “unsustainable status quo,” and his administration’s total commitment to the disastrous American policies that have brought us to precisely this point.